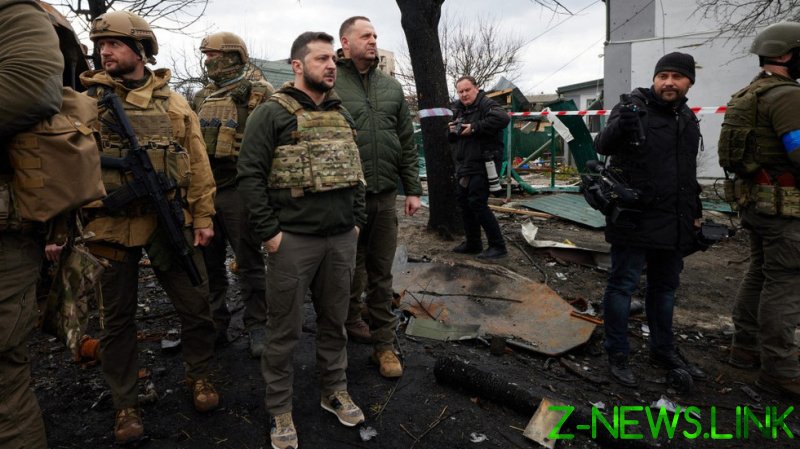 Ukrainian President Volodymyr Zelensky visited the town of Bucha on Monday, reiterating allegations against Russia of war crimes and vowing to punish those Kiev deems responsible. The town, located northwest of Ukraine’s capital, made the headlines over the weekend after multiple dead civilians were discovered laying in the streets there.

Zelensky, accompanied by a heavily-armed security detail, met a large group of foreign journalists at the site of the reported mass killings.

“We want you to show the world what happened here. What the Russian military did. What the Russian Federation did in peaceful Ukraine. It was important for you to see that these were civilians,” Zelensky told the reporters.

The alleged massacre, which Kiev was quick to blame on Moscow, has shown “the nature of the Russian military,” which “treats people worse than animals,” Zelensky claimed. The president also urged the West to “find a civilized solution” to deal with the incident and bring those responsible to justice, warning that Ukraine otherwise would instead have to opt for a “non-civilized solution” of its own. 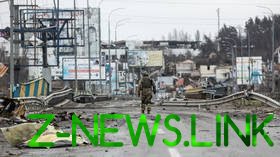 Moscow has firmly denied any involvement, suggesting the whole affair was “a provocation” deliberately staged by the Ukrainian side to frame Russian troops and derail peace negotiations. Zelensky himself claimed that it has now become “very difficult” to negotiate with Russia in the wake of the Bucha affair.

Ukraine’s president also urged the Western decision-makers responsible for not allowing Kiev into NATO to come and see the site and the purported victims of Russia’s military.

“I think they should come here and see how these games, how this flirting with the Russian federation ends,” he said.

The call echoed Zelensky’s earlier remarks he made in an overnight video address, when he blasted the Franco-German initiative to block Ukraine’s accession to NATO back in 2008 as a “miscalculation.” Ukraine’s president explicitly called on former German chancellor Angela Merkel and on French ex-president Nicolas Sarkozy to come and visit Bucha. 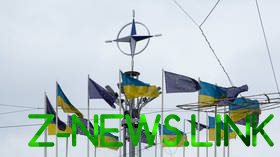 Merkel has already responded to the call, condemning the Bucha incident, yet stressing that she still “stands by her decisions in relation to the 2008 NATO summit in Bucharest.” Back then, the US-led block recognized Ukraine’s and Georgia’s aspirations to join, agreeing that they would eventually do so, though it did not take any further steps.

Russia has now demanded that Ukraine officially declare itself a neutral country that will never join NATO. Kiev insists the Russian offensive was completely unprovoked and has denied claims it had been planning to retake the two rebel regions by force.