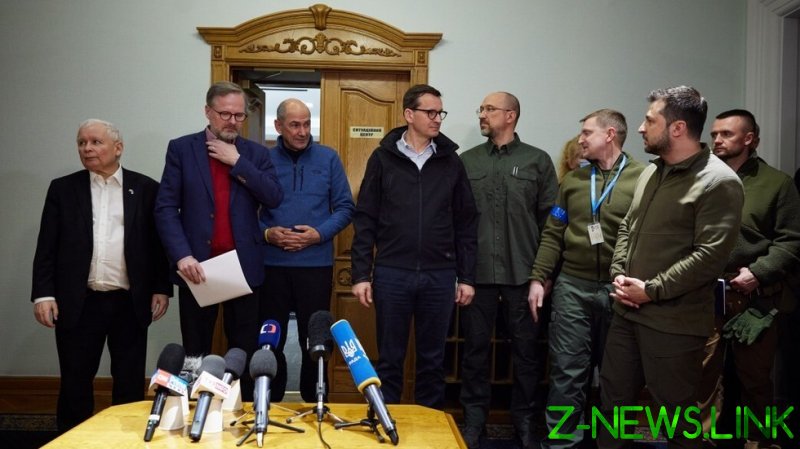 Ukrainian President Volodymyr Zelensky and Prime Minister Denys Shmyhal held a meeting with the prime ministers of Poland, Slovenia, and the Czech Republic, which concluded on Tuesday evening.

The talks concerned questions of intensifying sanctions against Russia in response to the military offensive, humanitarian aid for Ukraine, and the country’s potential EU membership, according to the Ukrainian prime minister.

According to the Polish PM’s office, the prime ministers arrived in Ukraine on Tuesday afternoon by train. Government spokesman Piotr Müller said the meeting was agreed upon after consultations with European Council President Charles Michel and European Commission President Ursula von der Leyen.

In a press conference following the meeting, Zelensky told reporters that “with allies like this we will win this war.” Shmyhal said, “the personal visit of the EU leaders was proof of boundless support for all Ukrainians” which will be “recorded in history textbooks.”

The three European leaders all expressed support for Ukraine during the press briefing and on social media. “Europe stands with you,” Czech Prime Minister Petr Fiala said, adding that the main goal of the visit was “to say to our Ukrainian friends that they are not alone,” and to assure the citizens that the Czech Republic would continue to provide support for refugees.

“We are here to admire your fight against such a cruel aggressor. This invasion has to stop,” Polish Prime Minister Mateusz Morawiecki said, calling on the EU to grant Ukraine candidate status and emphasizing Poland’s efforts in defending its neighbor state against aggression.

Slovenian Prime Minister Janez Jansa sent a message for the EU ahead of the meeting, stating on Twitter that Ukrainians are defending European values with their lives, and that Europe has become more united than ever.

Moscow attacked its neighbor in late February, following a seven-year standoff over Ukraine’s failure to implement the terms of the Minsk agreements, and Russia’s eventual recognition of the Donbass republics in Donetsk and Lugansk. The German- and French-brokered protocols were designed to regularize the status of the regions within the Ukrainian state.