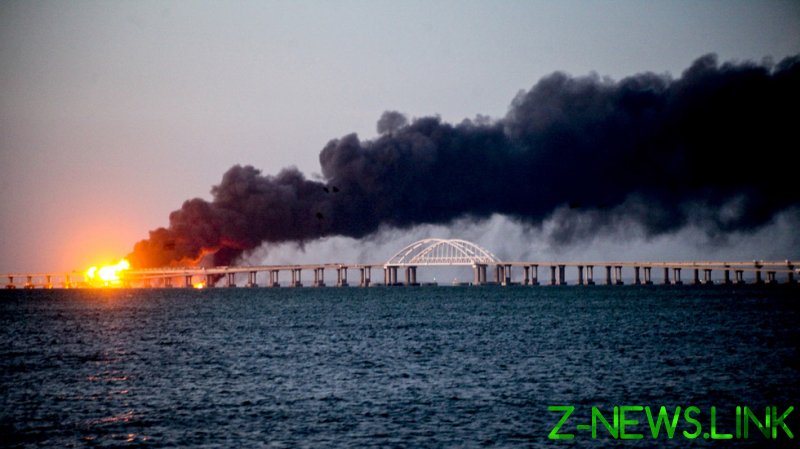 Ukrainian President Vladimir Zelensky has denied “ordering” the bombing of the Crimean Bridge, earlier this month. The president made the remarks during an interview with the Canadian broadcaster CTV, aired on Wednesday.

Asked to comment on the “spectacular attack” on the bridge, as the broadcaster put it, Zelensky said Kiev was not involved.

“We definitely did not order that, as far as I know,” he told the reporters.

The bridge was hit by a massive explosion on October 8, which severely damaged its road traffic section and killed three civilians, as well as setting a passing freight train on fire. Several top Ukrainian officials openly celebrated the attack, while the country’s postal service issued a stamp commemorating the blast, just hours after it happened.

Moscow has directly blamed Kiev for the incident, branding the explosion a “terrorist attack.” Russian law enforcement claims to have established how the bomb, which was disguised as construction materials, made it to the bridge from the Ukrainian port city of Odessa, via multiple transit countries.

Russian investigators believe the plot was hatched by Ukrainian military intelligence. Moscow has identified 12 individuals as suspected accomplices in the plot and has arrested eight of them, the FSB said.

The list of people in custody includes five Russians and three foreign nationals, who hold passports of Ukraine and Armenia. A spokesman for Ukrainian military intelligence told the media that the FSB was a “fake structure,” and that the report was unworthy of comment.

Days after the attack, Moscow ramped up its aerial bombing campaign against Ukraine, targeting its critical infrastructure with cruise missiles and suicide drones. Kiev reported on Tuesday that 23 people were killed and over 100 injured in the barrage.