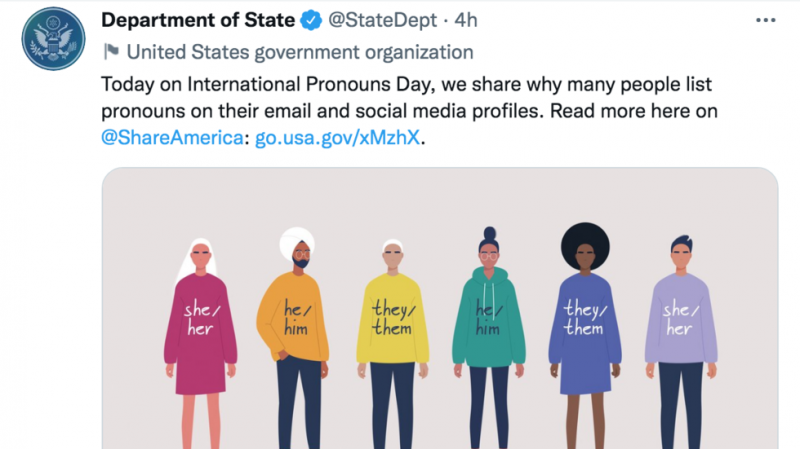 The tweet includes a link to a government web address with a report on “why” people list their preferred gender pronouns when introducing themselves, in person or remotely.

“Knowing and using someone’s pronouns,” the report states, “avoids accidentally assuming an incorrect gender based on a name or an appearance.”

It goes on to cite the State Department’s recent announcement that people will be able to choose their gender on passports, regardless of their documentation. The choices will also “eventually include an option for nonbinary, intersex and gender-nonconforming people.”

Via the Share America blog run by a branch of the department, pronouns such as ‘ze/zir/zirs’ were acknowledged.

“Other pronouns include the feminine she/her/hers and the masculine he/him/his. Some people are pioneering gender-neutral pronouns such as ze/zir/zirs,” the report reads.

The State Department’s focus on educating people on gender pronouns had many on social media wondering what exactly the agency is trying to accomplish and why any of its time or resources would be spent on this.

“I’m sure our adversaries are checking our pronouns before they nuke us,” conservative journalist Beth Baumann tweeted, while pundit and author Kurt Schlicter added: “Fire every bureaucrat.”

“Americans that were left stranded behind enemy lines in Afghanistan will be pleased to know that the State Department is on top of the pronouns issue,” conservative strategist Arthur Schwartz tweeted in reaction.

International Pronouns Day was founded to help end stigmas around “respecting, sharing, and educating” others on one’s personal pronouns, according to the event’s website.