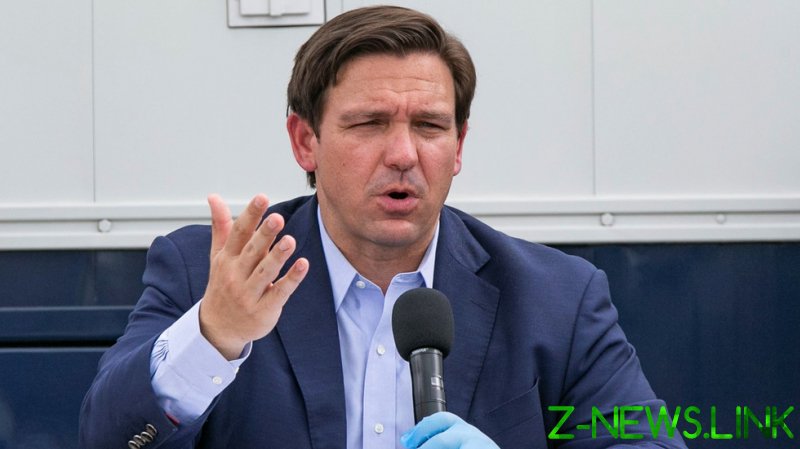 The nearly two-hour video was first streamed on the channel of a Florida CBS affiliate in mid-March, in which the governor spoke at length at the Florida state capitol with four public health experts hailing from Stanford University, the University of Oxford and Harvard Medical School.

While the roundtable remains accessible through an archived link, YouTube sent the video down the memory hole sometime this week, as was first noted by Jeffrey Tucker of the American Institute for Economic Research on Wednesday. The page previously hosting the video now gives a brief notice: “This video has been removed for violating YouTube’s Community Guidelines.”

RT reached out to YouTube and the Tampa Bay CBS affiliate, WTSP, for further details on the decision, but received no immediate response.

YouTube has stepped up its efforts against what it deems “misinformation” in recent months, particularly as it relates to the ongoing coronavirus pandemic and vaccines developed to combat it. During a panel hosted by the World Economic Forum earlier this week, CEO Susan Wojcicki boasted of the platform’s “very high ability” to hunt down false information and other rule-breaking content and “reduce it significantly over time.”

“So if you look at where we were in 2017… we’ve reduced this by more than 70%. And that is due to an incredible amount of hard work with machines and also improving our policies,” she said. “Not only did we remove content that violates our policies at that significant rate, but we also created more policies.”

Though it remains unclear what policy YouTube cited in removing the roundtable video, the decision may have been linked to the health experts featured therein, each of whom have courted controversy over their vocal opposition to lockdowns and other pandemic policies imposed by world governments.

Three of the four health scientists – Oxford’s Sunetra Gupta, Stanford’s Dr. Jay Bhattacharya and Dr. Martin Kulldorff of Harvard Medical School – are leading signatories of the Great Barrington Declaration, an open letter signed by nearly 14,000 public health scientists that voices “grave concerns about the damaging physical and mental health impacts” of lockdowns. The experts call instead for “focused protection” of vulnerable groups, rather than sweeping shutdowns and stay-at-home orders.

While the main signatories hold positions at top universities, the declaration has come under fire from other experts, with White House Covid adviser Anthony Fauci rejecting the letter as “total nonsense” and “very dangerous.” National Institutes of Health director Francis Collins similarly told the Washington Post the proposal is “dangerous” and only supported by a “fringe component of epidemiology.”

More recently, Harvard’s Kulldorff – whose work has been cited in scientific literature more than 25,000 times – ran afoul of Twitter’s content filters, with the platform slapping a notice on a March 15 tweet pertaining to vaccines. It deemed the post “misleading,” citing “health officials.”

DeSantis himself has also faced intense criticism over his decision to lift all coronavirus restrictions in Florida back in September. Though the move prompted a flurry of predictions that Florida would soon rocket to the top of the US’ worst-hit states, the outcome has been less dramatic. Compared to California – which remains locked down and has a much younger population on average – Florida’s coronavirus fatality numbers are comparable, sitting just shy of 1,600 per million residents to the latter state’s 1,500, according to data compiled by the New York Times.