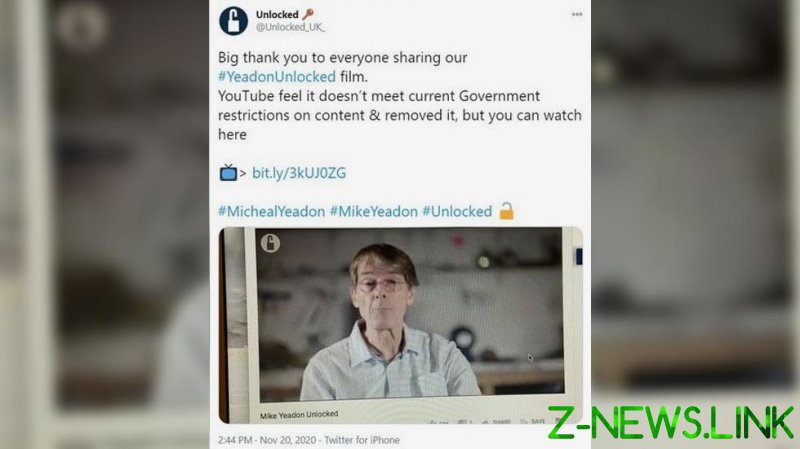 The UK government’s Scientific Advisory Group for Emergencies (SAGE) has got many things about the Covid-19 pandemic wrong, says Dr Mike Yeadon. He is an expert in allergy, immunology, and respiratory diseases, with over three decades of experience, including working as Pfizer’s vice president and chief scientific officer. Apparently his credentials amounted to nothing, though, when digital ‘censors’ at YouTube noticed that he was criticizing the prevailing narrative on the necessity of lockdowns.

For its modelling, SAGE assumed that the entire population was susceptible to SARS-CoV-2 when it first emerged in China last year. And it now considers that only a fraction of the public has been infected so far, based on the detectable presence of antibodies in their blood. These premises are behind the harsh restrictions currently in place in the UK, which are designed to prevent a massive and deadly outbreak of Covid-19.

According to Dr Yeadon, the assumptions are totally wrong, and the worst of the disease is over, with Covid-19 falling into the background as a relatively nasty but otherwise ordinary seasonal respiratory disease. A significant part of the population was actually not susceptible to the virus, thanks in large part to cross-immunity from previously being exposed to other kinds of coronaviruses. Those range from the relatively exotic but closely related SARS-CoV-1, the pathogen behind the 2002–2004 SARS outbreak, to human coronaviruses causing the common cold.

The large number of positive Covid-19 tests is not indicative of the number of active cases, Dr Yeadon believes. The common PCR test detects RNA remnants of the coronavirus, but it cannot tell if they came from live viruses or those long conquered by the immune system. There are also false positives. Mass testing causes an increase in those, he says, as people less experienced in how to properly conduct tests are recruited to run them.

On the other hand, the percentage of people currently immune to Covid-19 is seriously underestimated because it is measured by the presence of antibodies in people’s blood, Dr Yeadon argues. Antibody levels rise when an organism reacts to an active infection, but immune response memory – which determines whether the immune system is trained to beat a disease – is stored in T-cells. So, a person perfectly capable of standing up to Covid-19 may test negative for antibodies, he concludes.

Dr Yeadon has made his case and explained why he believes SAGE’s advice to be “lethally incompetent” in a number of interviews, including a 30-minute sit in with Unlock UK, a lockdown-sceptical media outlet. The video was published on Friday and is available on Facebook, but for some reason it was banned by YouTube, which says it violated its terms of service.

Western tech giants have been relentlessly pressured by politicians and legacy media to fight against misinformation on their platforms. Their idea of what constitutes misinformation seems to be closely aligned with prevailing narratives, while complaints about censorship mount from those challenging the mainstream narrative.

This seems especially true for Covid-19 response coverage, as many people find restrictions at best controversial and at worst a government assault on liberties. Just this week, the UK’s top counter-terrorism police officer, Met Assistant Commissioner Neil Basu, advocated punishing those who spread “misinformation that could cost people’s lives,” like anti-vaccination conspiracy theories.

Dr Yeadon, incidentally, argues that mass vaccination against Covid-19 would be unnecessary, because the outbreak has almost run its natural course before an efficient vaccine was even available.