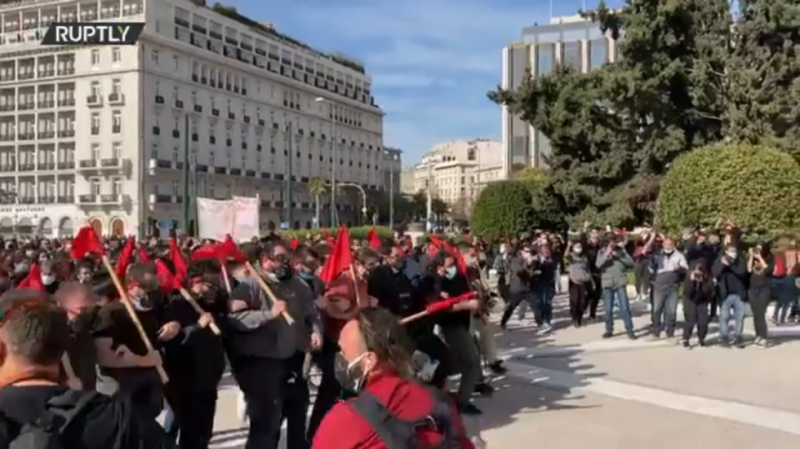 Thousands of protesters faced off with law enforcement near the Hellenic Parliament building in Syntagma Square on Wednesday, as lawmakers debated a bill that would place uniformed, unarmed security personnel on university campuses. Currently, police are prohibited from entering the grounds of higher-education institutions, due to a law adopted after the country’s right-wing dictatorship violently crushed a student uprising at Athens Polytechnic in 1973.

Proponents of the new reforms say they are necessary to crackdown on the lawlessness that has become commonplace on university campuses, especially in Athens. But others see the reforms as a rollback of hard-fought freedoms that have become central to Greek academic life and want the government to understand their displeasure over the proposed bill.

The reforms would also call for more thorough teacher evaluation, as well as require students to pass college entrance exams. Additionally, the bill would limit how many years students can remain enrolled at universities without graduating.

Footage from RT’s video agency, Ruptly, captured the ensuing chaos in the Greek capital. A group of demonstrators armed with flag-draped clubs were filmed marching towards a line of riot police before engaging in hand-to-hand combat.

In another clip, protesters lob firebombs at police. Plumes of smoke filled the air as the incendiary devices sparked fires in the streets.

Law enforcement officers deployed tear gas to disperse the demonstrators, and were seen wrestling several people to the ground before hauling them away. Local media reports say that as many as 30 protesters were arrested.

Students also demonstrated in Thessaloniki, with activists barricading the entrance to the Greek city’s main university.

Greek MPs are expected to vote on the divisive reforms later on Thursday.