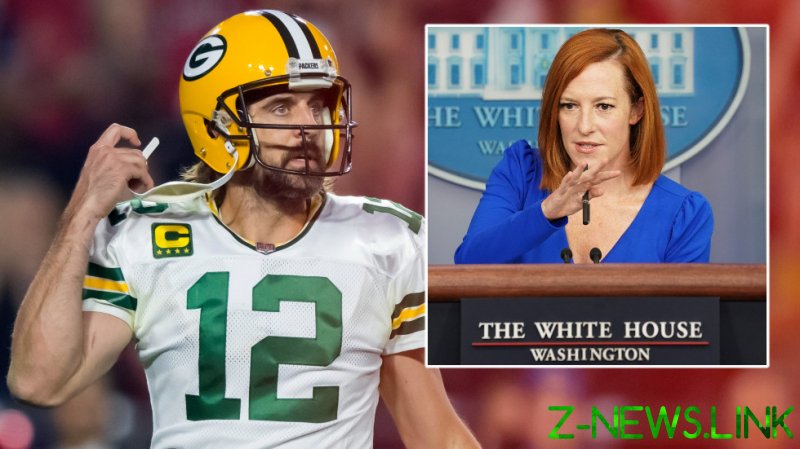 Rodgers provoked the ire of an online mob during an extensive interview with former NFL punter Pat McAfee a little more than a week ago in which he detailed his hesitancy at taking one of the various mRNA vaccines against the coronavirus, as well as the Johnson & Johnson vaccine because of fears of blood clotting issues.

Throughout the interview, Rodgers indicated that he was aware that his words would draw fire from the “woke mob” and that he might end up as the latest victim of the “cancel culture” movement – but later came clean in a subsequent interview with McAfee by admitting that he did indeed “mislead” people about his vaccination status after telling reporters in August that he was “immunized” against the virus.

Rodgers, who missed the Green Bay Packers’ limp defeat to the Kansas City Chiefs last weekend as a result of testing positive for Covid-19, further stated in his initial interview that he had sought advice on natural remedies against Covid-19 infection from popular podcast host Joe Rogan – including taking Ivermectin, a drug which has been at the center of debate as to its efficacy as a treatment.

The Packers star’s stance led to him being pilloried in some sections of the US press despite his rejection of both those who are keen to criticize him and the right-leaning types who see his anti-vax stance as heroic.

And that continued at a press briefing at the White House when Psaki was probed on Rodgers’ position.

“You know how we feel about misinformation. We’re against it,” answered Psaki in what was her first briefing after returning to the dais following her own Covid-19 infection last month.

Rodgers, meanwhile, received clearance on Saturday to make his return to the Packers’ lineup ahead of his team’s Sunday fixture against the Seattle Seahawks – a development essentially confirming that he has passed protocols to play, is asymptomatic and team doctors have given him a clean bill of health after completing a mandatory 10-day quarantine when he initially tested positive.

As one might have expected, the reaction to Psaki’s statement provoked intense debate online.

“Wait, what information was it exactly?” wrote one. “What he did was ask medical professionals?

“He [took] treatment which Israel had provided for 2.5 million people.

“Eighty-one studies back up what Rodgers did… how’s that misinformation?“

“They call it misinformation because they don’t like it. They would call it lying if they could prove it,” said another.

Another disagreed, arguing: “He should not have lied about being vaccinated – and yes, he is spreading misinformation.”