Home / WORLD / You have to applaud tiny Barbados for finally cutting its colonial ties & telling the British Queen: ‘You’re fired’

You have to applaud tiny Barbados for finally cutting its colonial ties & telling the British Queen: ‘You’re fired’ 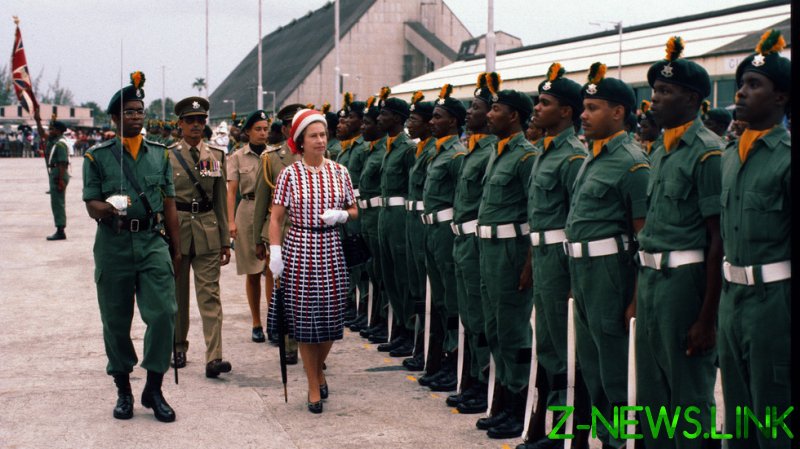 Britain is under siege from all angles. Inside its borders, there’s serious unrest over how the government is handling the Covid-19 fallout and over its plans to break international law. Outside, there’s a battle with the EU over Brexit and lots of disappointed allies.

Barbados is the latest to land a blow.

The Caribbean paradise, which has a population of just 287,000 and is 21 miles (34 kilometers) long and, at its most, 14 miles wide, has announced it’s going to remove Queen Elizabeth as its head of state. Its plan is to formally split on the 55th anniversary of independence from Britain, in November 2021.

There’s a certain irony that they’re still intertwined with the Queen, given independence was gained so many years ago.

An address written by Prime Minister Mia Mottley stated: “The time has come to fully leave our colonial past behind,” adding “this is the ultimate statement of confidence in who we are and what we are capable of achieving.”

Colonial is the telling word.

In 1625, the English ship Olive Blossom landed on the island and claimed it in the name of King James I. What followed from there has been recounted many times, but essentially Barbados was plundered, turned into a sugar colony and became the new “home” for African slaves.

The slave trade eventually ended and, as the generations rolled on residents created their own currency, the Barbadian Dollar, and encouraged the proliferation of their local tongue, Bajan.

But the English – by then, the British – remained. Even after the island gained its independence from the “mother country” on November 30 1966, the Queen was retained as its head of state.

Barbados is showing its chutzpah by deciding it’s time she was gone. Major other former members of the British empire, like Canada, Australia and New Zealand, still retain the Queen as head of state (she reigns over 15 in all, excluding the UK), so this is a bold move.

The timing will have been influenced by the BLM movement that has swept the globe. There’s been a massive reaction on every continent, very few places haven’t witnessed reactions – be they negative or positive.

It’s admirable how the authorities and people of Barbados have handled their response.

We’ve all seen so many protests, now they’re no longer impactful. Many have turned into violence or spawned looting, rendering their original motivations obsolete.

We’ve seen politicians express their disgust in parrot-fashion about racial inequality. Some businesses have been boycotted, some local initiatives have tried to restore balance. The thing is, none of it has changed anything structurally.

It’s all raised awareness, similar to how we all know about climate change but there’s very little impact we can effect without the system changing.

That’s what Barbados has done. No screaming, no shouting, no drama. They’ve calmly thought about it and decided to tell the Queen, a rich white woman who lives 4,200 miles away, “there’s the exit.”

It’s a demonstration of true leadership.

Her Majesty’s position and title by definition placed the Barbadians beneath her. And when the 94-year-old passes away, her son Prince Charles would have stepped into the role with glee.

The Bajans won’t be sacrificing anything either. Tourism is a huge part of the economy and their sun-kissed beaches have a distinctly non-British vibe. They also have a sizeable financial sector and there’s some agricultural sectors too

They did have a serious national debt issue in 2018 and defaulted on bonds, but overall the standard of living is good.

Britain isn’t providing any lifelines and while this move will obviously damage the relationship between the two nations, it won’t impact on either in reality.

In fact, it is the Queen and Britain who should be worried. Might Barbados be the first in a line of dominoes?

Surely other nations in her realm must be thinking, do we want to be associated with a regime that enslaved millions and pillaged our lands?

It’s food for thought for the likes of Jamaica, Saint Lucia and Papua New Guinea. And might republicans in places like Australia and Canada be emboldened and slightly embarrassed about being beaten to the exit door by little Barbados?

Quite quickly, the Queen and her family could become persona non grata across a swathe of nations.

In the modern world, a downfall like that would happen rapidly. No more invites to tour nations, no more heads on stamps, a backlash against the charities they oversee and so on.

The reaction from Joe Public to the announcement has been split down predictable lines. One Twitter user fizzed: “Will this mean they also forgo any benefits or handouts they get from the British government?…they have to leave their colonial past behind & that must include the begging bowl.”

It is true Barbados has received aid from the UK via the Department for International Development.

But some of the reported sums are relatively minuscule, like £1.8 million to build a hospitality management training complex.

Britain has also given £4.5 million to the Barbados-based Caribbean Development Bank’s fund to support countries in the region with Covid-19 recovery.

Social media has also been flooded by those on the other side of the argument. One person beamed: “Barbados says NO to the Queen. Time for others to break the chains of colonial strangulation.”

Surely any progressive and even-minded person would agree this is positive action that deserves applause. Barbados doesn’t need to be overseen from one of the 775 rooms inside Buckingham Palace.