Home / WORLD / ‘You guys paid for all this’: Internet fumes as billionaire Bezos thanks Amazon employees, customers for funding his trip to space

‘You guys paid for all this’: Internet fumes as billionaire Bezos thanks Amazon employees, customers for funding his trip to space 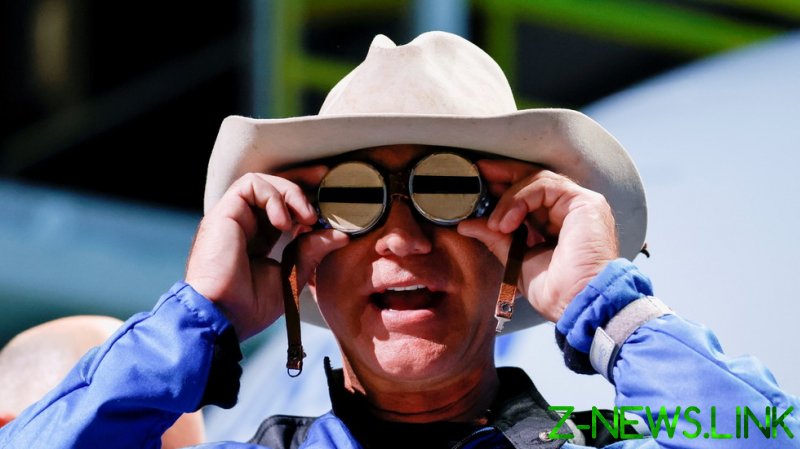 Judging by reaction on social media platforms, the expression of appreciation wasn’t appreciated. Observers ripped the 57-year-old billionaire, who ranks as the world’s richest person with a fortune estimated by Forbes at nearly $205 billion, for indulging in space endeavors at the expense of allegedly mistreated employees rather than using his riches to help people.

“Correction: Employees didn’t pay for this,” podcast host and Ohio state senator Nina Turner said on Twitter. “Their wages were stolen to pay for a billionaire’s space vacation. Jeff Bezos can thank his workers by treating them with dignity and paying them fair wages, and he can thank us all by paying his damn taxes.”

Journalist Auskar Surbakti picked up on the tax theme, saying, “Jeff Bezos should also thank governments around the world for allowing him to dodge countless billions of dollars in taxes.”

Yahoo Finance host Zack Guzman tweeted that Amazon warehouse employees would just like to be granted bathroom breaks. In fact, workers have complained of grueling and unsafe working conditions, as well as insufficient and timed bathroom breaks. The company also was hit with five new lawsuits in May, brought by warehouse and office workers who alleged racial and gender discrimination, sexual harassment and retaliation for filing complaints.

Writer Nicole Tersigni likened Tuesday’s comment by Bezos to a macabre scene: “Jeff Bezos, gluing the last body to his castle made out of poor people, couldn’t have done it without you guys.”

But Bezos did find admiration in at least one place: the White House. President Joe Biden’s press secretary, Jen Psaki, called Tuesday’s Blue Origin space flight “an example of American exceptionalism. That’s how we see it.”

After expressing his gratitude, Bezos spoke about the incredible feeling of venturing to space. The most profound aspect of the experience was looking down on the earth from above and seeing the “fragility” of its atmosphere.

“When you get up above it, what you see is it’s actually incredibly thin,” Bezos said. “It’s this tiny little fragile thing, and as we move about the planet, we’re damaging it.”

To the extent that human activity damages the atmosphere, Bezos likely inflicts more than his share of harm. He already owns two private jets, and his carbon footprint will be growing considerably after he reportedly bought a $165 million Beverly Hills mansion last year and ordered a 127-meter yacht. The $500 million vessel requires a motorized support ship with a helipad, at least partly because its three giant masts don’t allow for landing a helicopter on its deck.