Home / WORLD / You get what you deserve’: Conservatives jeer as pro-censorship group Right Wing Watch gets BANNED on YouTube (but not for long)

You get what you deserve’: Conservatives jeer as pro-censorship group Right Wing Watch gets BANNED on YouTube (but not for long) 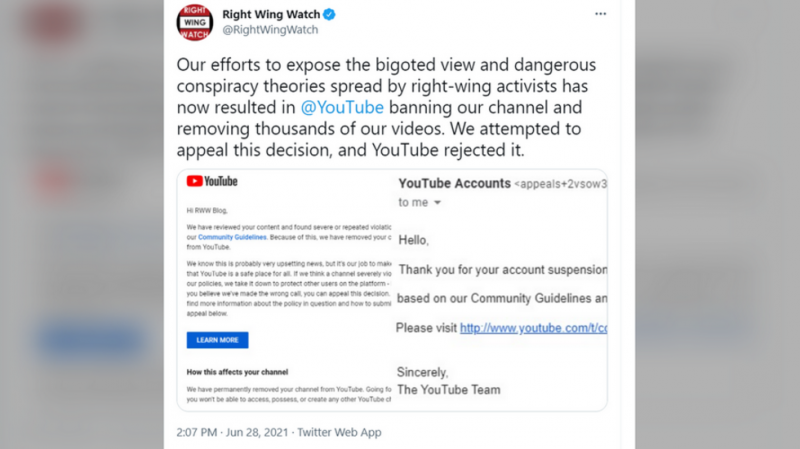 Right Wing Watch describes itself as a group that “monitors and exposes the activities of Radical Right political organizations.” What that means in practice is RWW combs social media for controversial statements, before explicitly or implicitly calling for the accounts behind them to be banned.

However, tables were seemingly turned on Monday, when RWW’s own YouTube channel was banned, due to “severe or repeated violations” of the platform’s community guidelines.

“Our efforts to expose the bigoted view and dangerous conspiracy theories spread by right-wing activists has now resulted in @YouTube banning our channel and removing thousands of our videos,” RWW tweeted. “We attempted to appeal this decision, and YouTube rejected it.”

After initially banning the account and confirming the suspension as legitimate, on Monday evening YouTube sent RWW an apology for “any inconvenience and frustration” and said they “sometimes make mistakes trying to get it right.”

YouTube has cracked down hard on right-wing content in recent years, including “misinformation” surrounding the 2020 election and “conspiracy theories” around coronavirus vaccines. The RWW team often pointed out examples of what it considered “bigoted” content on YouTube, but with the ban-hammer now wielded against them, anti-censorship advocates couldn’t help but rub it in.

“Congratulations once again to all the liberals and leftists – led by their journalists – who urged censorship of political speech by Silicon Valley monopolists based in the belief that it would only be used to silence your adversaries and enemies but never your allies,” journalist Glenn Greenwald tweeted after the ban was announced.

“Good on YouTube,” conservative pundit Lauren Chen tweeted. “You get what you deserve.”

RWW would frequently clip content from right-wing creators for its videos. It’s not improbable that this was the cause for the ban – not some political realignment within YouTube itself.