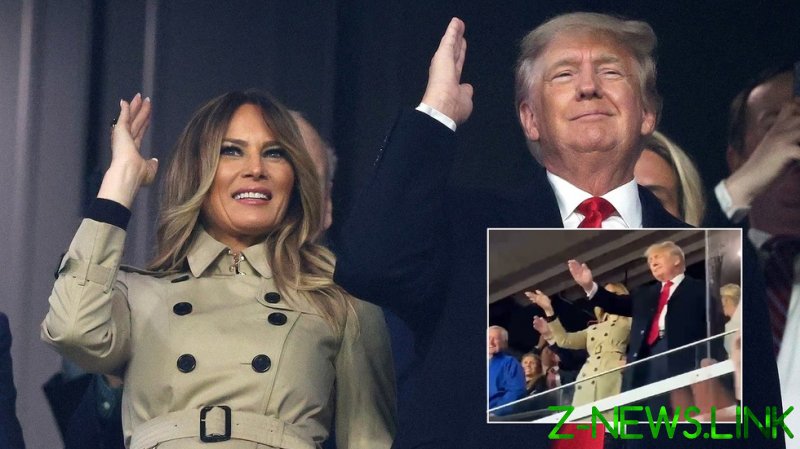 Trump was in attendance at Truist Park in Atlanta to watch the Braves beat the Houston Astros and move to within one win of sealing a first World Series title since 1995.

Watching on from a private suite, Trump and wife Melania were seen joining the throngs of Braves fans in doing the ‘chop’ gesture which some have claimed is ‘racist’ because it supposedly draws on stereotypical tropes of Native Americans.

Those assertions didn’t stop Trump as he gleefully raised and lowered his arm in unison with the vociferous home support on at least two occasions.

The gesture prompted instant reaction online – where some were sure Trump’s actions were bound to trigger liberals and the woke brigade.

“Thank you, President Trump, for joining thousands of Atlanta Braves fans in the tomahawk chop – and also for triggering leftists across the fruited plain,” wrote conservative political commentator Todd Starnes.

“Trump did the tomahawk chop at the Braves game tonight… Listen closely… you can hear liberals screeching in the distance,” added author and comedian Tim Young.

And sure enough, some opponents claimed Trump and his fellow tomahawk choppers were engaging in a casual act of white supremacism.

Other enraged liberals even went as far as to claim that Trump liked the gesture because it “reminded him of the Nazi salute.”

Baseball in Atlanta has been a particular battleground between conservatives and their woke warrior rivals after the All-Star game earlier this year was pulled from the city in a row over new voting laws in Georgia which were accused of being discriminatory.

At the time, Trump called for a boycott of MLB over the move.

Elsewhere, some MLB teams have been caught up in the increasing row over the use of names and imagery which some now claim are discriminatory towards minority groups.

The Cleveland Indians have already said they will change their name and will start the 2022 season as the Cleveland Guardians – a decision which Trump had blasted as bowing to ‘cancel culture’.

Earlier during the World Series, one fan went viral for holding up sign declaring that the Braves’ tomahawk chop gesture was ‘racist’ – although MLB commission Rob Manfred has defended fans in Atlanta.

“It’s important to understand that we have 30 markets around the country. They’re not all the same,” Manfred said at the start of the series with the Astros.

“For me, that’s kind of the end of the story. In that market, taking into account the Native American community, it works.”

Walker is a former University of Georgia Heisman Trophy winner and running back with the Dallas Cowboys, Minnesota Vikings and USFL New Jersey Generals.

Trump has encourage Walker to run for Senate, and was an owner of the Generals when Walker played for the team in the now-defunct league.

There appeared to be conflicting reports over just who had facilitated Trump’s appearance at Saturday’s game, with the 75-year-old former US leader issuing a statement thanking MLB boss Manfred and New York Yankees president Randy Levine for the invitation.

“Melania and I are looking forward to a wonderful evening watching two great teams!” said Trump.

The MLB denied issuing an invitation, stating that Trump had “requested to attend the game.” 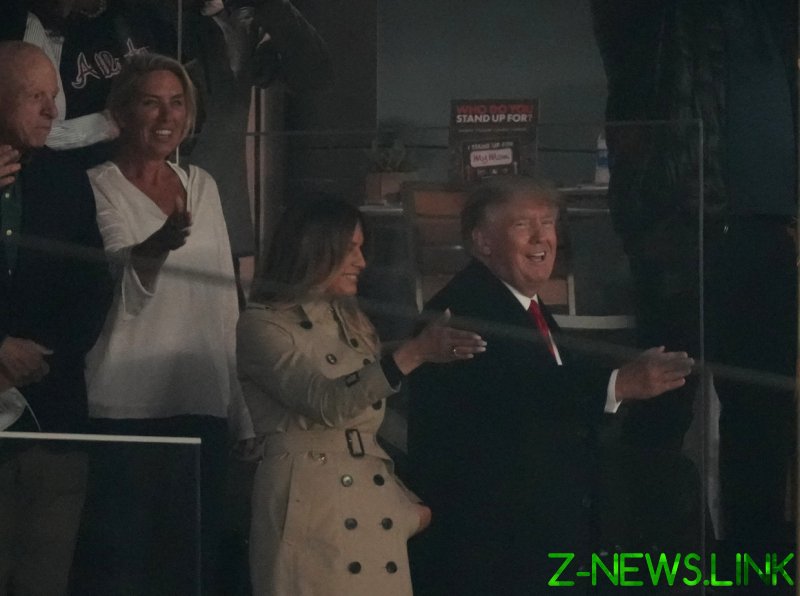 Trump appeared to enjoy himself as he watched on in Atlanta. © USA Today Sports

The Braves had found themselves 2-0 behind after Houston star Jose Altuve’s 23rd post-season homer in the fourth inning, but hit back and completed a comeback when Dansby Swanson and Jorge Soler hit back-to-back home runs in the bottom of the seventh.

Atlanta now have a 3-1 lead in the best-of-seven series, ahead of Game Five in Atlanta on Sunday.