Home / WORLD / Yet again, Novak Djokovic rises above the slings and arrows to prove his class on court

Yet again, Novak Djokovic rises above the slings and arrows to prove his class on court 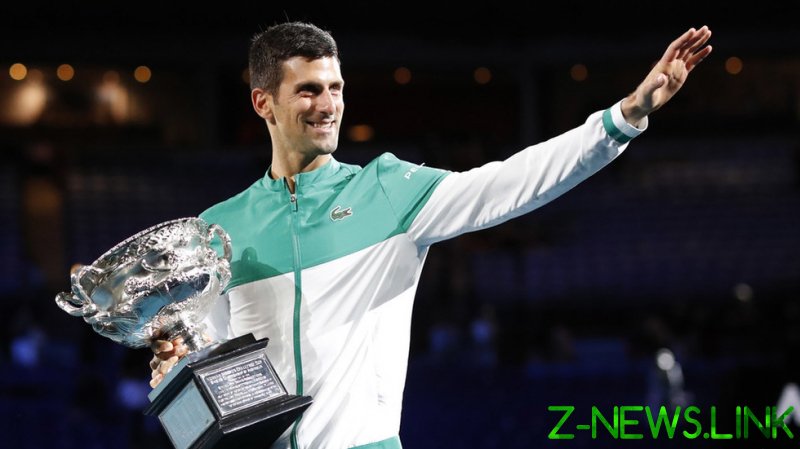 For a ninth time, Djokovic was the man to lift the silver Norman Brookes Challenge Cup aloft at the end of two weeks at Melbourne Park. The 33-year-old has called the tournament his ‘second home’, such has his success been down the years – and this time it was Daniil Medvedev whom the Serb sent packing after the Russian had attempted to dislodge him from those home comforts.

The Russian was a whirlwind heading into Sunday’s meeting, on a 20-match hot streak and widely tipped as posing a serious threat to Djokovic’s unblemished record in finals at Rod Laver Arena. Apart from a tightly-contested first set, it was Djokovic who was dominant. By midway through the second set, Medvedev looked broken and beaten, his hopes of a maiden Grand Slam wilting in the Melbourne evening air. Medvedev’s irresistible force had met the immovable object. 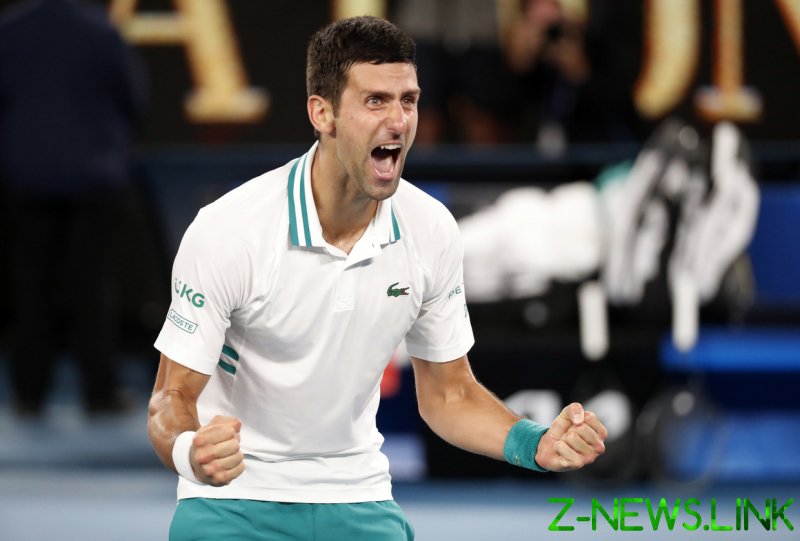 It wasn’t the contest that many had hoped for, and Medvedev never looked like reaching the heights to which he has ascended so often in recent months. Much of that, though, was down to the Serbian wall he came crashing into. Djokovic was the shrewder of the two, winning the crucial points and key battles, snuffing out any glimmers of hope.

The third set offered perhaps the perfect example. At 4-2 down in the set, Medvedev landed a crunching forehand winner to move 15-30 up on the Djokovic serve. The Russian pumped his arms wildly, geeing up the crowd. If there was ever a time for him to belatedly get a foothold back in the match, this was it. 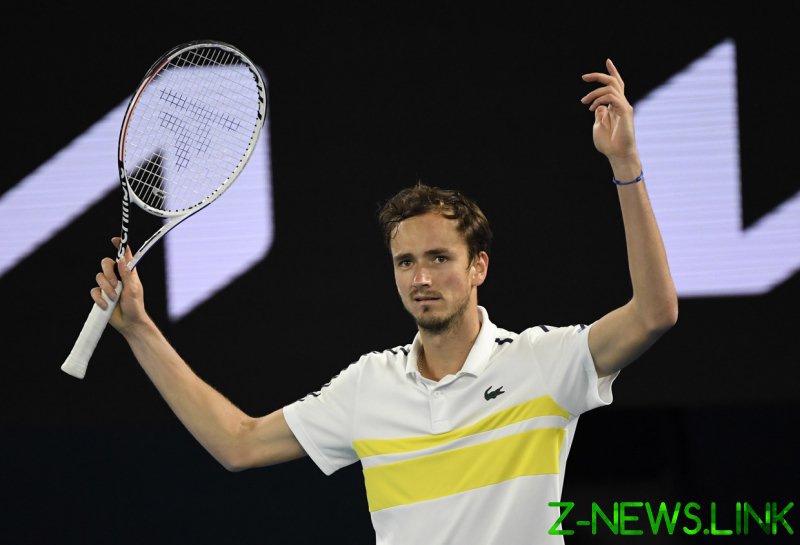 Medvedev tried to rally the crowd late on in Melbourne. © Reuters

The door was ever-so-slightly ajar, but just as he did all evening, Djokovic slammed it shut. A big serve followed by a pinpoint forehand to the back of the court reversed the momentum of the game, before Medvedev netted at the end of a 22-shot rally. Djokovic was 5-2 up, and broke the Russian in the next game to take the match and the title.

Medvedev was the latest young pretender to come knocking, and had suggested before the final that the pressure would all be on Djokovic. The Serb, he claimed, had the onus on him due to his unbeaten record Down Under and his quest to edge closer towards Rafael Nadal and Roger Federer in their three-way tussle for the greatest ever of the Grand Slam winners.

Djokovic had dismissed that notion – adding a warning to the Net Gen whippersnappers such as Medvedev. “With all my respect about the other guys, they still have a lot of work to do,” the Serb had said. “I’m not going to stand here and hand it over to them. I’m going to make them work their ass off for it.”

Tennis’s ultimate warrior, Djokovic made good on those words on Sunday, and despite all the noise surrounding Medvedev – and his momentum – in the end was a straightforward and familiar denouement in Melbourne.

In contrast to Sunday’s final, what came before at this year’s tournament certainly wasn’t as serene for Djokovic. Not long after arriving in Australia, he was branded “a tool” by home hero Nick Kyrgios, merely for suggesting that players sent into hard quarantine on their arrival could be given more propitious conditions for their preparations for the tournament.

Djokovic himself was safely ensconced in Adelaide with far fewer restrictions and daily access to training facilities, and was merely advocating on behalf of fellow professionals less fortunate. He was going out of his way, but nonetheless was pilloried as out-of-touch and unsympathetic to the lockdown plight of the locals Down Under. Kyrgios curried the public’s favor, and the pair’s spat would be aired throughout the tournament.

The image of Djokovic as a pampered star who has been dismissive of the Covid pandemic is not a difficult one to inflate. His vaccine views at the start of the pandemic drew disdain, even though he insisted they were his personal thoughts and he has not sought to foist them onto others.

The world number one then became public enemy number one for going ahead with his ill-fated Adria Tour last summer, which ended in disaster and a spate of infections. By Djokovic’s own admission, that decision was extremely dubious – even though, again, it was one forged in good intentions.

On the court, an accusation slung Djokovic’s way is that he feigns tactical injury to provide respite whenever he’s under pressure. After his five-set third-round match with Taylor Fritz this year in Melbourne – during which Djokovic struggled visibly with an abdominal injury – the American told reporters: “If he was really, really injured, he wouldn’t have kept playing.” There were similar sentiments on social media, despite Djokovic stating that he might even be forced out of the tournament. 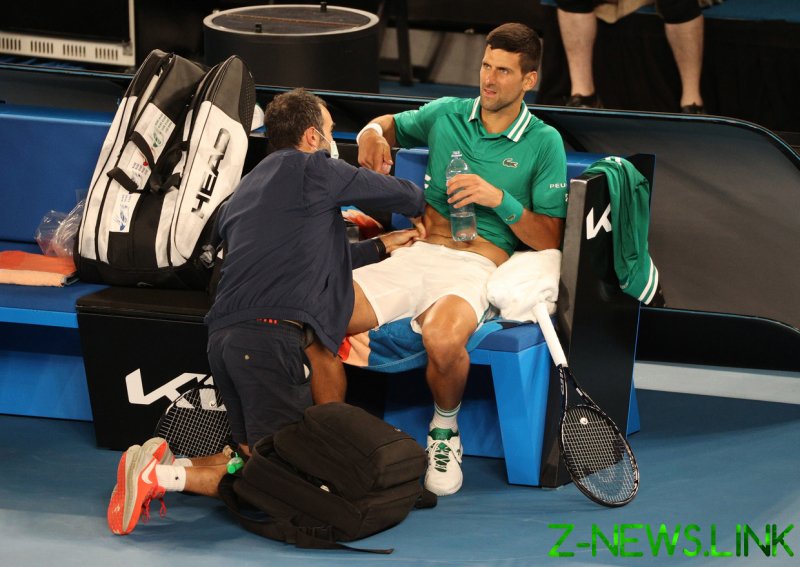 Djokovic appeared in discomfort earlier in the tournament. © Reuters

In reality, Djokovic will never be cut as much slack as the likes of Rafael Nadal or Roger Federer, those two other greats vying with him for the biggest haul of Grand Slam titles. Whether it’s the belligerence that characterized his early career or his unorthodox views away from the court, the Serb will always be trailing in the popularity stakes. The die has long been cast in that respect, and the character narrative of Djokovic as something of a villain is one that’s hard to shift.

But there was perhaps a telling end to events in Melbourne which belies much of what has been said by the likes of Kyrgios. In his post-match speech, the beaten Medvedev recalled an early meeting with Djokovic, back when the Russian was way down the rungs of the world rankings and the Serb was already a star.

“Just to tell you a small story, I first practiced with Novak when I was 500 or 600 in the world,” Medvedev said. “He was already number one and had just won Wimbledon. I thought, ‘OK, he’s not going to speak to me,’ because the guy was a god for me. I was really shy, [but] he was talking to me like I was a friend. He’s never changed – he’s always been a great sport and a great friend. He’s a great guy.” 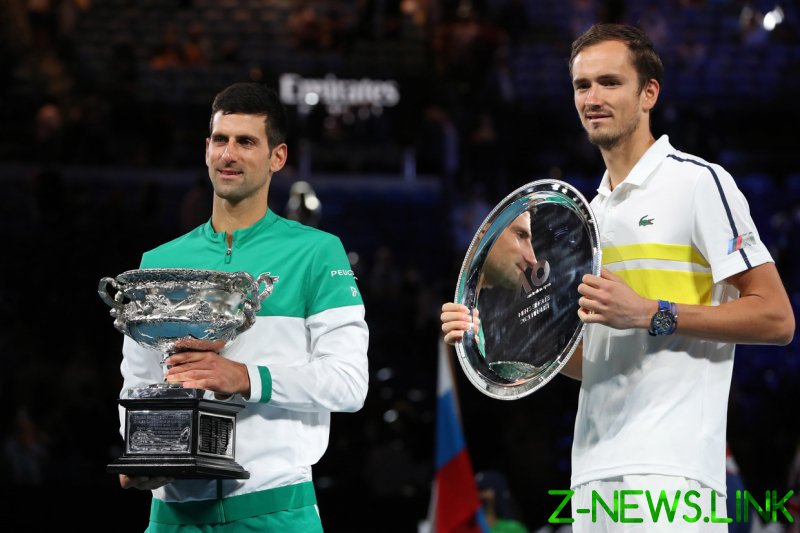 Djokovic and Medvedev pose together after their final. © Reuters

Few are privy to what goes on in tour locker rooms, but the compliment came across as sincere, and Medvedev would have had little to gain from ingratiating himself with Djokovic or bestowing phony platitudes.

The remarks were reciprocated by Djokovic, and while they may do little to change perceptions held by his most hardened detractors, they at least provided a warm ending to a very different type of Australian Open – one which had begun with rancor for the Serb but ended, as it so often does, with Djokovic standing top of the pile once again.