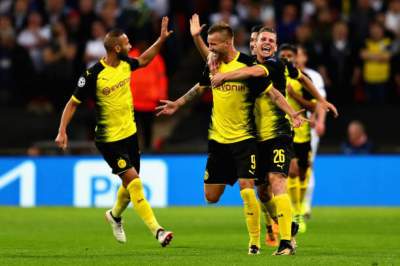 On the eve of Borussia D in the first match of the group stage of the Champions League with the score 1:3 at Wembley lost to “Tottenham”. The only goal for the Germans in the 11th minute, perfect execution to hit the goal scored by Yarmolenko, which, considering the match against SC Freiburg took only 23 minutes to mark his debut goal in the new team.

See also:  The President of "Dynamo" has promised to let Yarmolenko

The portal Whoscored.com Yarmolenko put the highest score in the “Borussia” D (7.1 points). For 90 minutes, ex-leader of “Dynamo” scored one goal, had two shots, 43% had contact with the ball, made a 29 assists (22 exact), once broke the rules and earned himself a yellow card (for Jan Vertonghen).

All actions of Andriy Yarmolenko in the match with “Tottenham”:

See also:  Named the place of Ukraine in the world rating "bezveze"

The third match in a t-shirt Borussia Dortmund Andriy Yarmolenko could hold on Sunday when his club in the fourth round of the Bundesliga will “Cologne”.