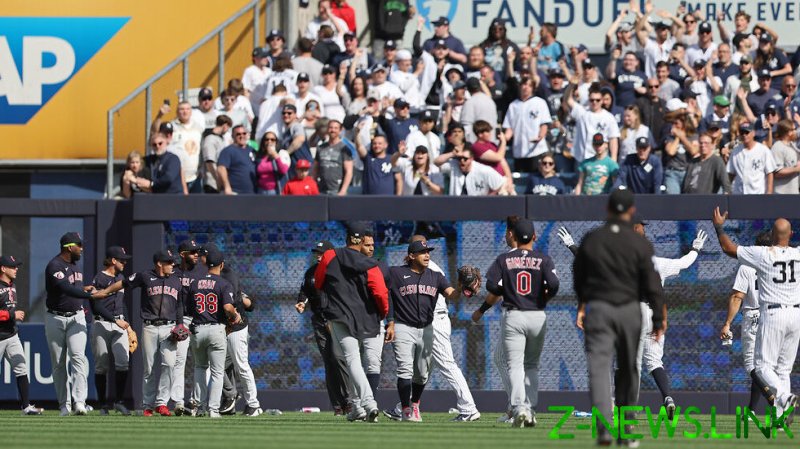 Fans of the New York Yankees baseball club were blasted for throwing bottles, cans and debris at Cleveland Guardians players on Saturday despite seeing their team win 5-4.

The Yankees sealed a tight victory in the ninth inning with two outs. Yet rather than celebrating their feat, they had to rush towards the wall in right-center field and attempt to calm down a rowdy pocket of home support in Yankee Stadium.

Trouble had been brewing when play was stopped after the Guardians’ Steven Kwan ran into the wall chasing the ball as the hosts tied the game.

Before the action could resume, Cleveland’s Oscar Mercado pointed to the stands and center fielder Myles Straw climbed the fence to confront one angry fan as another made a derogatory comment.

Then when Gleyber Torres scored a walk-off hit to seal the win, something that Straw described as a “beer parade” ensued which saw security and players from both teams try to get Mercado away from the right-field stands as beer cans and debris thrown in his and Straw’s direction piled up.

In his post-game interview, Straw said the reception in the Bronx was “brutal” before dubbing the home supporters “classless” and the “worst fan base on the planet”.

“It got to me a little bit. I said what I said. If I were to do it again, I probably would’ve said the same thing. That’s my guy. At that point, just cheer. Be happy your team tied the game up. Be a normal baseball fan and just enjoy what’s going on,” Straw added later after calming down a little.

“You can celebrate your team walking it off all you want, but don’t throw sh*t on the field,” Mercado said elsewhere. “Sorry for cussing, but that’s how people can get hurt. I should have probably walked away.”

Cleveland manager Terry Francona agreed by saying: “I don’t think people can throw stuff at our players on the field. That’s never going to be OK,” and so did several Yankees figures.

“Obviously, there’s no place for throwing stuff on the field in that situation,” Yankees manager Aaron Boone remarked. “I’ll get more clarity on it, but obviously, we certainly don’t want to put anyone in danger.

“We love the intensity. But obviously, you cannot be throwing stuff out on the field,” Boone added.

Yankees shortstop Isiah Kiner-Falefa, who tied the game, said that he “didn’t know what was going on, but that can’t happen”. 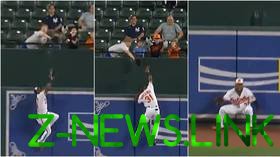 READ MORE: ‘Are you kidding?’ Fans in disbelief at off-the-wall catch by Orioles star Mullins as he robs Yankees of home run (VIDEO)

“I love the atmosphere, I love the fans, I love everything about them, but we win with class,” he demanded.

Thanks to Kiner-Falefa’s heroics, the Yankees claimed their fourth win in five games to improve to 9-6 in the AL East. They face the Guardians again at home on Sunday.