Home / WORLD / XR is not a protest group, but a vanity project for a liberal middle class that soon won’t exist at all

XR is not a protest group, but a vanity project for a liberal middle class that soon won’t exist at all 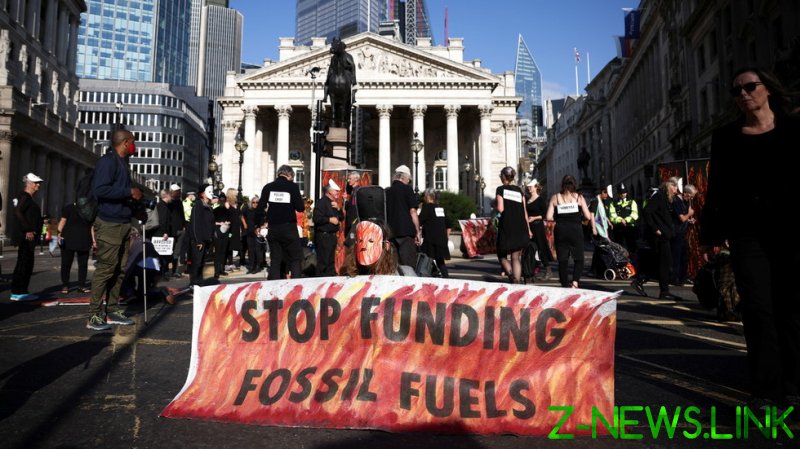 Extinction Rebellion, or XR as it has become known, is a UK-based activist group which claims to be a non-partisan protest movement to persuade governments to act on climate change. While it does so non-violently, its protest does take the form of what it calls “civil disobedience” as we have seen in London in recent weeks.

It is my opinion, though, that XR is largely a vanity movement and a release valve for Britain’s vanishing middle-class. As such, it may actually serve a purpose completely the reverse of its stated goals: as a tool of those global industrial powers allegedly responsible for climate change.

XR claims to be a grassroots organization, and draws comparisons with past protest movements such as Occupy Wall Street and the Suffragettes. But public support for the group is divided, with a 2019 poll suggesting that at least 54% of the British public disagree with its antics. These include acts of vandalism such as smashing windows – criminal acts which the group claim to be ‘super careful’ about committing.

The generally tired and narcissistic aspect of this protest, which harkens back to the larger yet equally ineffectual Occupy movement, speaks to XR being more of a kind of performance art – a media spectacle or late-stage ritual to keep a certain cultural subset of the society in a state of placated nostalgia. The activists in this movement do not emanate any sense of genuine rebellion, many of them resembling a gang of JK Rowling enthusiasts protesting during their corporate-cubicle lunch break. They have a desire to feel like effective ‘activists’, but they will ultimately affect nothing, being generally 50 years too late.

The older demographic in XT – ageing 90s pseudo-hippies – seem to be enthusiastically reliving a final chance to act superior. By ignoring a changed world in which they are ever-more obsolete, a nostalgic and public ‘giving out’ can make them feel that they are still doing good and ‘fighting the man’. However, the apparent system tolerance for XR is itself a likely indicator that the group is, in fact, working for ‘the man’. Genuine rebels are almost never treated as media darlings.

While environmentalism is a crucial issue and very dear to my heart, the game XR is playing – permitted public protest – sidesteps the various wider issues which is making its supporters a redundant identity, a vanishing class: the liberal middle-class.

Or maybe they aren’t oblivious? Perhaps even as the shadow of the final curtain looms over them, their only true desire is to perform one last ‘awareness-raising flash mob’ for a pet cause?

It seems world governments have recognized climate change, but that tackling it realistically involves something quite beyond ‘carbon taxes’ – a repeal of certain industrial systems altogether. The same systems which allow the activists to protest in luxury, wearing their plastic clothing and eating their soy and corn syrups snacks.

Real protest movements in the UK today are not about environmental issues, which along with other genuine concerns have taken a backseat to corporate-backed BLM riots or LGBTQ+ causes, including monument removal and vandalism. There is no meaningful protest of consumerism, or Wall Street, or globalism, or the system of industrial mass-production. Soon we shall not just see the vanishing of middle-class Harry Potterites – there will be no middle-class at all.

This strange alliance of the megacorps and high-finance world with social justice street protests is virtually the polar opposite of 1960s-2000s era anti-consumerist environmental activism. It is confusing for anyone who takes a close look at it, until they realize that it is merely system power pushing from both ends. Any activism from the middle class that fails or refuses to see the walls closing in from either side is ultimately performing a futile dance.

There is no doubt we will need to continue to witness their agitprop antics and vague demands. But not for the sake of environmental justice, or some kind of political breakthrough, but for their own sake – so that a permitted temper tantrum can retain for them a sense of relevance.

Thus this last hurrah of the ‘yuppie’ to reclaim that defiant feeling of a 2010 Adbusters magazine amounts to a mildly irritating BBC television spectacle. An orchestrated inconvenience which never truly leaves the confines of corporate control, as the activists dream they are living through a particularly exciting episode of ‘Friends’. They are likely nothing more than a distraction tool of globalist finance.

Deep down, even they surely know that they must soon make way for the causes of the New Man, who is the Last Man, who will fight to be enslaved harder. Who will complain that his shackles are not heavy enough.