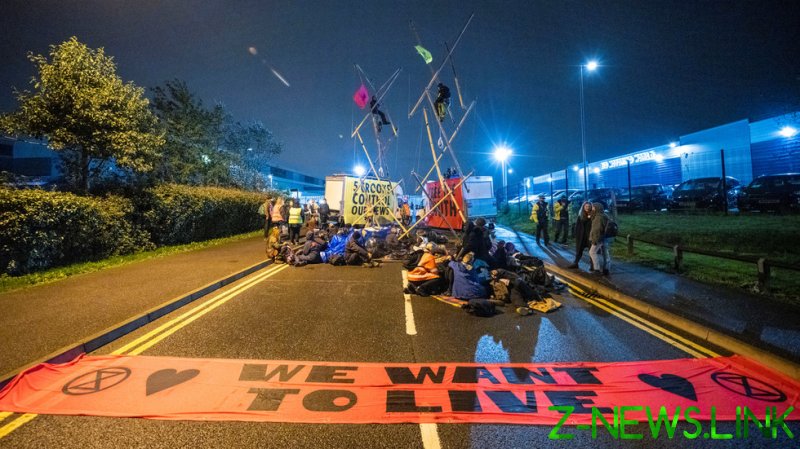 It’s a measure of these fractious times that what was intended as a peaceful protest has resulted in ludicrous name-calling and bickering. One side is being labelled terrorists, while the other is accusing their rivals of being worse than Nazis, which shows how far we’ve descended.

The bitterness was sparked by a stunt carried out as part of climate change campaign group Extinction Rebellion’s two-week plan of disruption in the UK, with groups of activists blockading newspaper printing plants.

They targeted three sites across Britain owned by Rupert Murdoch and used to produce his titles (The Sun, The Times), along with other daily newspapers (The Daily Telegraph, Financial Times, The Daily Mail).

The protest prevented the papers getting out on time on Saturday and numerous pictures surfaced of empty shelves where they would normally be displayed.

Eventually police arrested 77 people as they restored normal service at each of the sites.

The outcry from the newspaper industry has been the common rallying cry of ‘respect the freedom of the press’. The Daily Telegraph labelled XR “extremists” while The Sun ran a column alleging that the “police have proved once and for all they are no longer the impartial arm of law and order”. The Daily Mail had XR down as “eco-zealots” and “anarchists”, while Home Secretary Priti Patel stated in a piece in the same publication, “We must defend ourselves against this attack on capitalism, our way of life and ultimately our freedoms.”

According to reports, moves are now afoot to classify XR as a terrorist group so it can feel the force of  organised crime laws. That could see members locked up for five years.

Keen to prevent this happening, Labour politician Diane Abbott said, “They are not criminals, they are protestors and activists, in the tradition of the Suffragettes and the Hunger Marchers of the 1930s.”

However, the activists of XR are no shrinking violets and have been giving as good as they get. One of their leading figures Donnachadh McCarthy said of the British media: “This is like World War Two and you guys [the newspapers] are on the other side. It is a different existential threat but it is a bigger one than the Nazis.”

Reacting to the potential changes in legislation, environmental campaigner Rupert Read added: “The Government is thinking of reclassifying XR – a loose affiliation of grannies, teenagers and everyone in between, as ‘organised crime’? This is desperate stuff from an authoritarian Government desperate to please their masters in the billionaire press.”

So, who is on the correct side of the debate? Under the Human Rights Act, everyone has freedom of thought and assembly. We are all entitled to protest peacefully unless it interferes with national security, public safety or the prevention of crime. But press freedom is also covered under the Human Rights Act. It states that everyone has the right to freedom of expression, and journalists exercise this as part of their work.

Both sides clearly think the other is diametrically opposed to them. But ironically, they are both using the same justification for their actions – and it’s also this freedom which enables them to attack the other.

There was no terrorism at play, the protests didn’t hurt anyone and no one lost any work. The only direct impact was some individuals didn’t get their regular newspaper as expected.

By the same token, no one is acting like a Nazi or breaking democracy. We aren’t witnessing the horror of millions of people being sent to gas chambers.

And then there’s the fact that both sides also allege collusion by the state. The newspapers feel the police are against them and too liberal. XR believes the Conservative government is in collusion with media moguls to deliberately discredit its climate change message.

Both are accusations worthy of investigation if evidence can be presented. But the very fact that they can be made at all relies on the same freedoms.

These are the same freedoms that allow people to protest and are also ensure newspapers can print articles about whatever and whoever they wish.

Is investigative journalism that uncovers scandals so far removed from surprise public protests? They have the same goal, to shine light on things that are perceived to be bathed in darkness.

Both sides resorting to abusive diatribes and throwing out highly charged insults makes a mockery of the freedoms past generations fought to achieve.

It also means everyone not directly involved tunes out, as being labelled extreme is something that happens all too frequently these days. It no longer resonates.

But we can’t keep playing with fire and not get burnt.

XR and the newspapers are entitled to plough their own furrow in a way they see fit. But they need to realise they are defending the same patch of ground and be careful what they wish for. Otherwise, all we might be left with will be the real terrorists and Nazis.