Home / WORLD / ‘Worst main event ever?’: Ladd set to land prime UFC slot against Dumont despite being accused of ‘cheating’ in weigh-in row

‘Worst main event ever?’: Ladd set to land prime UFC slot against Dumont despite being accused of ‘cheating’ in weigh-in row 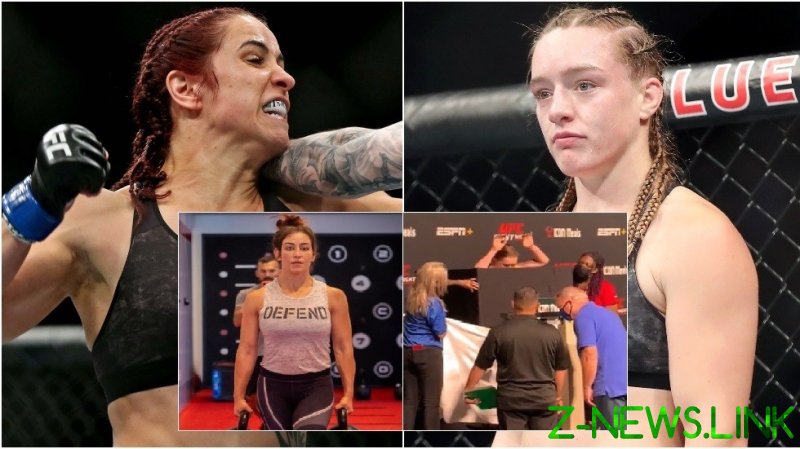 Ladd was last seen in the public eye just a week ago.

At a UFC Fight Night card in Las Vegas, the 9-1 competitor was scheduled to take on 8-1 foe Macy Chiasson until failing to make the 135-pound bantamweight limit at the weigh-in.

In scenes that went viral and shocked many online, the 26-year-old had to strip down after first coming in at 141.5lbs.

During her next attempt, with boarding hiding her modesty, Ladd was seen shaking and stumbling when asked to lift her arms in indicators of a brutal weight cut.

Still over at 137lbs as the best she could do after struggling on the scales for “three-to-four” minutes, Ladd faced calls from those such as respected pundit Ariel Helwani for her bout to be scrapped, which were eventually heeded.

Not buying Ladd’s excuse on Instagram, of being on her period and not wishing to “bleed in front of the media“, Tate remarked: “It’s one thing to miss weight; it’s another thing to try and cheat the scale and use every excuse in the book to not weigh in properly.”

When asked by a follower to specify how Tate supposedly cheated, the 35-year-old replied: “Guaranteed she didn’t want put both hands up because she wanted to grab the curtain structure placed around her. Nice try.”

Yet while many made calls for Aspen to move up to 145, the reaction to news reported by ESPN that she is being lined up to take Holm’s place in the featherweight bout has been met with opposition.

“I’m not one to normally harp on and sh*t on main events but jeez this fight sucks,” said one disgruntled party on Twitter.

“Worst main event ever?” it was asked.

“Time to thin out the roster and cut down on the amount of cards, [the] product is getting watered down,” another critic suggested.

Yet for all the criticism of Ladd, Dumont has also had her own troubles making the cut at bantamweight.

Weighing in at 139.5 in November last year, she won a split decision against Ashlee Evans-Smith in her supposed return to the division, but then decided to go and stay up at featherweight after where she battled to a split decision win over Felicia Spencer in May.

Tags against being despite dumont event prime worst