‘Worrying trend’: London seeks to exclude Moscow from European security system while it cozies up to America, says Russian envoy 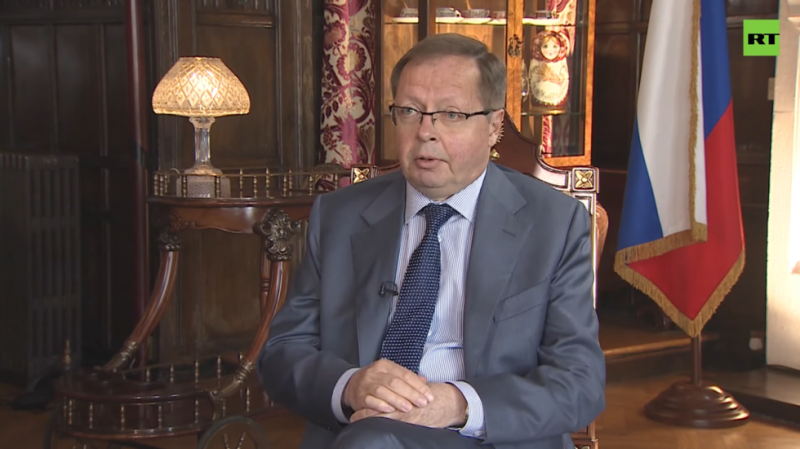 “We are accused of aggressive behavior but we see that it is the British government… that would like to become more aggressive,” Kelin said, referring to the UK’s recently published Integrated Review of Security, Defence, Development and Foreign Policy. The long-awaited document painted Russia as one of the biggest menaces to London, on par with Iran and North Korea, calling Moscow “the most acute threat in the region.”

London named Russia as “a threat about 14 times without any explanation” in the document, the ambassador told RT, expressing concerns that the paper, which is set to guide UK policies at least until 2030, fails to mention the necessity for dialogue between Moscow and London, unlike, for instance, NATO’s conceptual documents.

“We were surprised and a bit astonished about that,” the ambassador said.

The UK’s aggressive posture appears to be aimed at excluding Moscow from the broader concept of European security, the ambassador said. Kelin noted that while previously the goal was to create a common security space from Lisbon, Portugal to Vladivostok, Russia, now the desired security “zone” has shrunk to only include NATO and EU members.

He argued that attempting to boot Russia from the European security system would only undermine the framework.

“Without Russia, it is impossible to build up normal security [in Europe],” Kelin told RT.

Russia does not seek confrontation with the UK, the diplomat stressed. “We do not represent any threat, and we are not interested in doing that,” he said, adding that Russia would nevertheless respond in kind to London’s actions, whatever they might be.

We will treat the UK the way they are treating us

The new concept goes hand in hand with London’s strategy of cozying up to Washington, the Russian envoy believes, adding that what he observed in “recent months” was that “the UK is making a tremendous effort in order to come closer to the US,” post-Brexit.

The ambassador also believes that such aggressiveness might partially stem from the UK’s need to boost its defense and the armed forces in particular, describing the its decision to increase the cap on the total number of nuclear warheads in its stockpile to 260 as “striking.”

He also said that it may come as an “absolute surprise” to politicians around the world, including the UK’s allies in Washington, and would hardly contribute to the international arms control regime.

Yet, despite the political tension, “the situation is not completely hopeless” for Russian-UK relations, Kelin believes, adding that ties in the economic, scientific and humanitarian spheres have not been broken, and continue to develop.

Trade volume between the UK and Russia has increased over recent years, and some companies from both countries are launching ambitious projects together, the ambassador said. Most recently, a Russian Soyuz rocket launched 36 satellites for UK firm OneWeb into orbit as part of a project that had already seen a total of four such launches, he added.

The aggressive rhetoric pushed mostly by representatives in British defense circles is hardly shared by the entire British population, the envoy said, adding that the two nations “need cooperation.”