World of Tanks in 2018 will receive a massive update 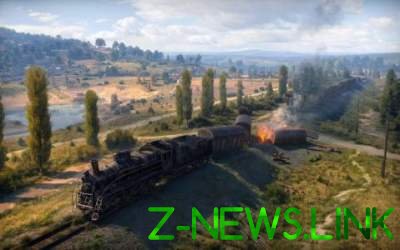 World of Tanks in 2018 will get a new engine, voice acting and recycled card

The creators of World of Tanks not only actively celebrate the upcoming new year and make plans for the future.

During the event, Wargaming Fest 2017 developers of the popular tank action was reported, that in March will launch the World of Tanks 1.0 on the PC, a major upgrade of the network games, which will bring a lot of graphical enhancements and optimizations, new sound and a redesigned maps with destructible environments.

The first is to say about the new graphics engine Core, over which worked more than 4 years. During its development were set a challenging task: not only to translate the schedule to a qualitatively new level, but also to optimize the performance to World of Tanks remained available to players even with relatively weak systems. Actually the engine was designed 3 years, and another year a team of several hundred people altered cards, all resources and in-game items based on new technologies of processing and displaying graphical content.

More than 25 maps have new textures, mapping system, water, sky, lighting and shadows. Attention was paid to the spaces beyond the field of battle, to make it look more realistic. Each map now will have its own unique atmosphere, and the experience of fighting will be even brighter — thanks to the many new and improved technologies and effects. Appliances and other objects in the world can now get wet. When the car crosses the river, she pushes around the water, and shots create waves. Plants and trees become more diverse and bigger in size. The redesigned cards include support for Havok Destruction, so in combat, players can destroy objects on the way.

Basically the key elements of the known cards that determine the visibility and nature of the fighting, remained in place, but due to processing was fixed old problem on such battlefields as “Fisherman’s Bay”, “Ruinberg”, “Industrial estate”, “Erlenberg”, “Steppe” and “Kharkiv”. It is, for example, about the imbalance of the opposing sides because of the peculiarities of the line of confrontation or unclear areas that cause confusion.

But not only the picture promises to be better. The developers collaborated with more than 40 composers and musicians to create an entirely new sound, designed to enhance the experience of battles. Each card will get its own music to create a unique atmosphere. For example, Kazakh folk music will be out in the sound card’s “the Lost city”, the Arabic motifs will be heard on the locations of the “Sand river”, “Airfield” and “El Halluf” and “Pass” sound Georgian melodies. And the music will load first, and during battles to change depending on the success of the team.

To evaluate all innovations, was released showcasing new game — World of Tanks enCore, in which you can assess how a gaming PC is ready for this update to see the new graphics and sound, to view the battles on recycled maps and give their feedback before the updates. This is a demo application available for download on the official website.

It is worth mentioning that the game is also on PlayStation 4 and Xbox One, but the Studio Wargaming.net says nothing as to when console will get World of Tanks 1.0. The developers also expressed interest in the platform Nintendo Switch, but said that the version for the Japanese system appears only in the case if the potential player base will be big enough.