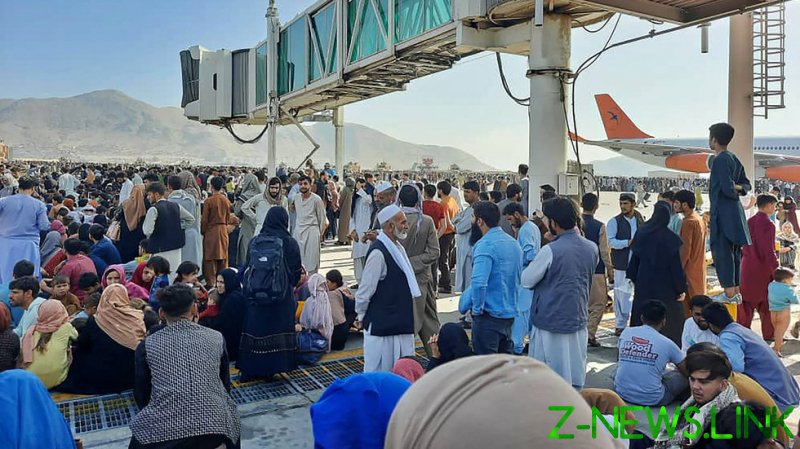 Soon after the Taliban seized the Afghan capital on Sunday, hundreds of civilians began to pour into Kabul’s international airport in hopes of being airlifted to safety. But by Monday morning, commercial airlines had halted operations in the Afghan capital due to gunfire around the air hub – caused at least in part by US soldiers firing warning shots at civilians gathering on the tarmac.

But the suspension of regular outbound flights is just one of several hurdles facing Afghans seeking a one-way ticket out of the country: airlines operating in the Afghan capital ask for passengers to provide a negative coronavirus test.

The arguably ill-timed flight requirement was spotted at the end of an Atlantic article chronicling the frustrating story of an Afghan interpreter, Khan, and his family as they try to secure safe passage out of the country.

“Today, Sunday, the Taliban are in Kabul… The neighborhood where Khan was renting a room has become dangerous, and he and his family have fled, walking six miles to another hiding place. He needs to find a facility that will administer the Covid-19 tests required by the airlines. He needs to get his family to the airport. He needs two more days,” reads the last paragraph of the article.

The detail caught the eye of Spencer Klavan, an associate editor at the Claremont Institute, who expressed considerable disapproval with the airline policy.

Others seemed to share his concerns about the medical prerequisite for getting out of Kabul.

“You put those people on a plane and get them the hell out of there. You can worry about tests or quarantine after they get to safety. The world has gone covid mad,” read one reply.

A self-described “vaccine absolutist” was similarly dismayed and suggested a reassessment of “priorities.”

The airlines that maintain such policies under the circumstances should be “named and shamed,” said another observer.

It appears that the Covid test requirement is being waived for some foreign nationals – although apparently not for Afghans. On Sunday, Pakistan’s Civil Aviation Authority said that Pakistanis returning home from Afghanistan would not be required to produce a negative PCR test.

The scramble to catch a flight out of Kabul has reportedly already led to numerous deaths. At least three people were reportedly shot and killed on Monday as Afghans poured onto the airport’s runway, prompting US soldiers to fire warning shots.

Later, several Afghans reportedly fell to their deaths after trying to cling to a US military transport plane that took off from Kabul.