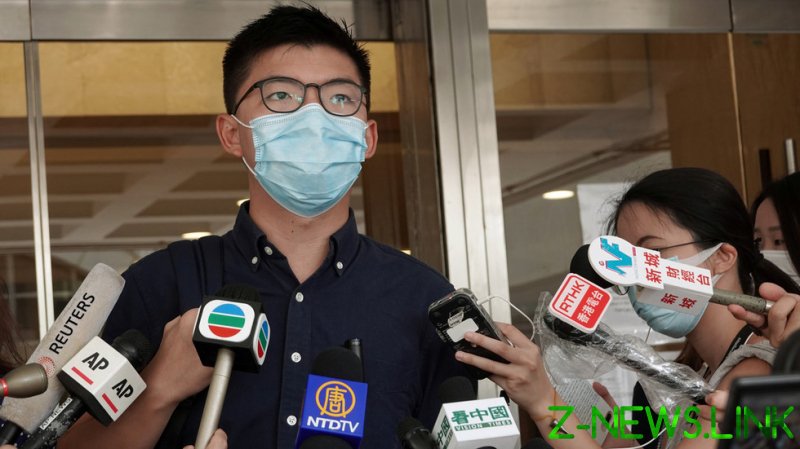 Joshua Wong has long been known as the “poster boy” of the Hong Kong protest movement. This morning, however, he found himself in trouble. The city’s authorities arrested him for participation in an “illegal assembly” last year. It’s not the first time he’s been in hot water either, and nor will it be the last. He says that the crackdown on his activities is an indicator of Beijing’s growing control over the autonomous city, which was handed back from British rule in 1997.

But what is really at stake here? Is Joshua Wong really as the western media depict him, a benevolent fighter for democracy who can do “no wrong”? Or is he as his critics point out, a pawn for foreign powers who seek to use his activities to undermine China’s national sovereignty? Beijing has long claimed the latter, and there is an ever growing plethora of evidence to prove that. For them, this is not so much a zero-sum game of “good vs. evil” in the view of oppressing Hong Kong, but an attempt to rightfully defend China’s sovereignty from outside interference.

What is Hong Kong’s true identity? And where does it truly belong? After 150 years of British colonialism, the city was returned to China 23 years ago as a “special administrative region” under what is known as the “one country, two systems” arrangement. While the British had handed Hong Kong back to the mainland, they nonetheless stipulated in the Sino-British declaration that it must sustain a “high degree of autonomy” for 50 years following the handover. They believed at the time that mainland China would ultimately evolve to become more like Hong Kong, and not the other way round. The west have thus appointed themselves “supervisors” of the city’s fate.

China, however, perceives the situation very differently. For Beijing, the handover of the city was not pledging subservience to UK demands as much as it was perceived as the rightful restoration of China’s sovereignty and the correction of historical injustices forced upon it by the British Empire. Even if existing under the “one country, two systems” arrangement, Hong Kong was rightfully and lawfully a part of China, and whilst it would sustain its own autonomies in given areas, the territory’s basic law mini constitution notes that sovereignty over the territory ultimately rests with Beijing and not outside powers, not least on matters such as foreign policy, defence and national security.

Herein lies the problem Beijing has with activists such as Wong. At the root of the Hong Kong protest movement sits an identity conflict which heralds the city as a distinct and separate entity, and rejects the notion of it being “part of China”. With the city being a global financial centre which is a bastion of western legacy and ideology, powers such as the US and Britain, have perceived the territory as a footbridge to transforming China and also furthering their interests in the region. This has led America to encourage and support unrest within the city as a foreign policy objective.

The evidence of this, and Wong’s association with it, is undeniable. Organizations such as the National Endowment for Democracy (NED) have invested millions in Hong Kong causes, donations which under US law would be illegal. The South China Morning Post reported that Wong’s former organization, Demosisto (which called for “self-determination” for the city) had a “backup bank account” within the United States before it was banned in Hong Kong.

Wong has maintained close personal ties with a number of U.S senators such as Marco Rubio, Joshua Hawley, and also met with US House leader Nancy Pelosi. He has lobbied for sanctions on Chinese officials, even handing over a list of people who should be targeted to the US Congress.. How would Americans react if Black Lives Matter leaders, for example, met and worked in such a way with Xi Jinping or Vladimir Putin?

Beijing has identified core activists such as Wong, as well as others such as Apple Daily owner Jimmy Lai, as threats to its own national sovereignty, accusing them of weaponizing foreign governments and politicians in order to further their objective of undermining China’s national sovereignty within Hong Kong, and in the process advocating American foreign policy goals. Western media and coverage has misleadingly portrayed the reactions of Beijing to this behaviour as a form of oppression or domination, assuming that it has no legitimate role in a city which, despite autonomies, is part of their own country.

Given this, it should be understood that China places a strong emphasis on national sovereignty owing to the legacy of its history. Whilst there are arguably obligations within the Sino-British declaration that ought to be upheld, these do not extend as far as arguing that Beijing has no place nor legitimate role over the city whatsoever. Activists such as Wong are rightfully thought of as national security threats as they are perceived as a “Trojan Horse” inviting foreign powers to undermine the status quo. Thus it’s not hard to see why the authorities are cracking down on him again.