Home / WORLD / Woman kicked in stomach by riot cop during St. Petersburg protests backtracks on forgiveness of offender, says she was confused 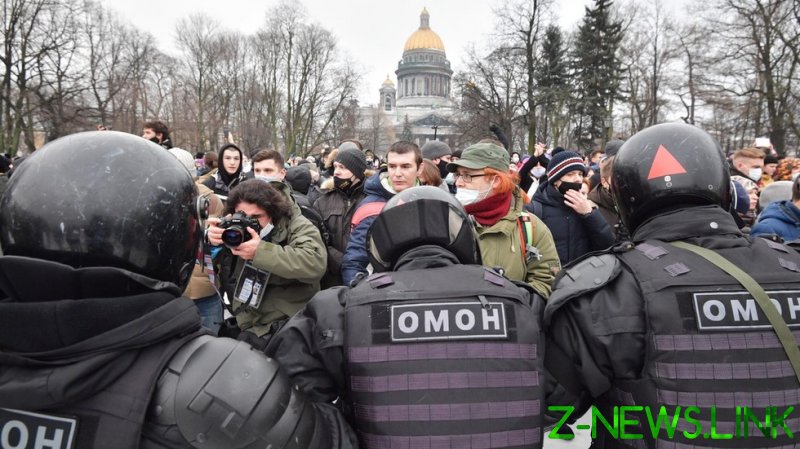 After the clip of the incident went viral and caused vast public outcry, the responsible officer visited 54-year-old Margarita Yudina in her ward, bringing flowers and apologizing for his actions.

The woman, who collapsed on the pavement and suffered a concussion as a result of the kick, had forgiven the cop during his visit and asked him not to worry. “Everybody is alive. The flowers are so nice… It’s fine. Godspeed,” she said in another video posted online.

Yudina also gave an interview on camera later, in which she reiterated: “I have forgiven my offender… I hold no grudges. As an Orthodox Christian, I forgive everybody.”

However, she changed her mind after her discharge from the hospital.

“I was confused. I’m also generally a soft tempered person – so I forgave him,” she said.

Nonetheless, the woman believes now she should’ve responded differently. “I should’ve said: you’ll have my forgiveness when you release all political prisoners, including Alexey Navalny.”

“It’s not about my forgiveness after all as anyone could’ve been in my place,” she added.

In the clip, the woman receives the kick as she was asking the officers about the reasons they detained one of the demonstrators. “I saw a flying leg and then it all went blurry. I woke up in a hospital, but still couldn’t fully understand what happened. I was in shock,” she recalled.

According to the woman, she’d been sharing opposition views for a long time and her appearance at the illegal rally demanding the release of jailed opposition figure Alexey Navalny was no coincidence. “I came there deliberately,” Yudina said.

Navalny was arrested earlier this month, pending trial over violations of his probation terms, which date back to a suspended prison sentence in a 2014 fraud case. On January 17, the activist returned to Moscow from Germany where he was recovering from an alleged poisoning. Navalny suddenly fell ill on board a plane in Russia last year.

The activist accused Russian secret services of attempting to kill him. The Kremlin has categorically denied any involvement in the case, saying Navalny is working with foreign intelligence agencies in a bid to smear Russia.