Home / WORLD / Wokeism has lost its mind when rape, pedophilia and murder are celebrated in ‘Lolita’ and Dr. Seuss is banned 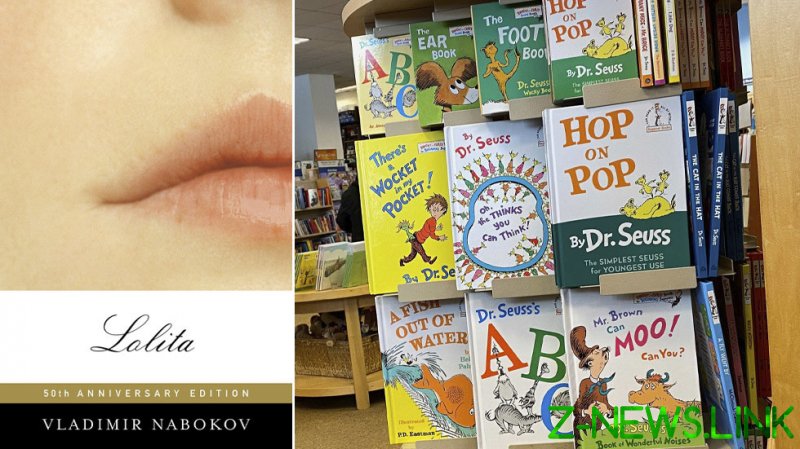 It seems like just yesterday that the Western world was preaching to one billion Muslims that nothing would stop its cartoonists from scribbling caricatures of the Prophet Mohammed, even though such an act is strictly forbidden by the Koran.

“Freedom of speech” was the battle cry heard throughout the land, soon to be replaced by “Je suis Charlie,” following a deadly attack at the offices of the French satirical newspaper Charlie Hebdo that published the forbidden caricatures.

Today, those very same Western defenders of artistic expression and free thought have cowered before the insane woke posse, declaring six Dr. Seuss illustration books guilty of “portray[ing] people in ways that are hurtful and wrong,” according to the website of Dr. Seuss Enterprises.

Curious as to what the latest fuss was about, I decided to watch an audio version of one of these racist tracts, entitled If I Ran the Zoo (1950), after the children had gone to bed, of course. Without giving away the plot – especially since Dr. Seuss books are now selling like hotcakes, the predictable consequence of censorship – the story is centered on young Gerald McGrew who dreams of ways he would change the zoo.

McGrew sets off on an adventure around the world to bring back the exotic wild beasts of Dr. Seuss’s hyperactive imagination. The first destination takes him to some Asian land, where we see a wild animal inside of a bamboo cage being carried aloft by three smiling Oriental-looking males. Perhaps the most offensive part of the scene shows young McGrew posing proudly atop the cage with a rifle at his side.

The next stop on this young white boy’s racist romp is to the “African island of Yerka to bring back a tizzle-topped Tufted Mazurka.” Once again, McGrew is being assisted in his hunt by the local inhabitants, in this case two African natives sporting native dress. The boy even travels as far as Russia in search of the ‘Russian Palooski’, an exotic bird “whose headski is redski and belly is blueski.” A Cossack-looking guy complete with a gun, massive beard and an oversized fur cap is used to represent the Russians.

The question I found myself asking after perusing this one sample of prohibited Seuss contraband is ‘when exactly did we become such unbearable prudes?’ I’m old enough to remember the day when mentioning the racial differences between people was acceptable across the social and political spectrum.

In 1973, by way of example, then-Governor of California Ronald Reagan was treated to a ferocious celebrity roast where the legendary comic Don Rickles poked fun at everyone – blacks, whites, even his own Jewish ethnicity. The audience roared in laughter and asked for more.

Looking back on those less anxious days, America was a far happier and healthier place, willing to acknowledge – and even laugh – at the differences that separated its many diverse inhabitants. Indeed, it seems hard to imagine the survival of a fiercely multicultural society that is not allowed to mention its differences.

Aside from intellectual immaturity, however, there is something really rotten at the heart of this new Dark Age that has settled upon the American mind, and that is the sheer hypocrisy of it all. That realization hit me after reading a commentary in the New York Times on Vladimir Nabokov’s tour de force 1955 novel, Lolita, and how it has been able to avoid the cancel culture inquisition for so long.

The author, Emily Mortimer, explains how readers could sympathize with the protagonist pedophile, Humbert Humbert, who is “hilariously self-aware and funny.” But surely it must take more than just a savage wit to excuse the most heinous of criminal acts, right? From here, Mortimer presents a curious case as to why the “moral police” have not come after Lolita with the same intensity as other comparably benign works, like Gone with the Wind, Merchant of Venice and Huckleberry Finn.

“Lolita makes us see with the eyes of a man who is a pedophile, a rapist and a murderer, and that’s I think the essential reason it’s escaped … the moral police in the 60 years since it’s been published,” she explains. Yet that explanation falls short of the mark. After all, other books like Gone with the Wind also teach about a different sort of crime, that of racism, albeit unintentionally through the prism of a historical novel. Yet such books are now on the endangered species list. In any case, Mortimer wraps up her argument with a conclusion that almost knocked me clean out of my chair.

“There is no escaping his awfulness, but we get inside his head and his heart,” Mortimer writes. “We end up not only empathizing with but also loving a murderer and the rapist of a young girl. And it feels really good. It feels like a deep relief. It feels exhilarating and paradoxically cleansing.”

There are some things you just can’t un-read.

That incredible statement goes a long way toward explaining the inherent problem with cancel culture, and that is its dangerous double standards. On the one hand, behaving like a local chapter of the Taliban, the woke mob is demanding the elimination of any works of art – even historic monuments in the public square – that have the slightest connection to “racism.” Even Coca-Cola is hectoring people to “be less white.” On the other hand, we are allowing our children to be led astray by the radical progressive teachings that have come to dominate Western academia and curriculum.

Consider this paradox: at a time when US book publishers are handwringing over a cartoon image of Chinese and African tribesmen appearing inside of a Dr. Seuss book, public libraries are hosting Drag Queen Story Hour for young children. Is anyone questioning the contents of the books that the queens are reading, and what effect they may have on the minds of their highly impressionable audiences? Yes, some people do, but they run the risk of being banned from their social media platforms as a result of their efforts.

Or what about the transgender movement, which has directed much of its controversial message at the youth? Already a number of children and adolescents who made the fateful decision to “transition” to the opposite sex are waking up to the reality that they have made a terrible mistake. But once a person undergoes such an operation, complete with hormonal therapy, it is very difficult to go back.

So where are the woke warriors to make sure these children are not led astray at the most confusing time of their life? Not only are they not to be found, but even the books that could have helped them make the right decision are being banned. Last month, for example, Amazon dropped a book by conservative scholar Ryan T. Anderson, When Harry Became Sally: Responding to the Transgender Moment, which discussed the many pitfalls of “transitioning” from one sex to another.

So, while the woke warriors are worried that some people may feel “hurt” by some cartoon sketches in a Dr. Seuss book, thousands of children are being subjected to real and irreversible physical harm, the sort described by the literary titan Vladimir Nabokov. And as Joe Biden rammed through an executive order giving transgender women (ie biological males) the right to compete in female sports, as well as use the bathroom and changing facility that corresponds to their “sexual identity,” the harm against women and children promises to continue.

The fact that these issues – far more relevant than the myth of ‘systemic racism’ in America – are being met with a screaming silence by the radical progressives proves they are more interested in the political value of their work as opposed to any selfless humanitarianism. If they were, there’d be a corresponding #MeToo and Child Lives Matter movements for the troubled youth.

As the master of the prose Vladimir Nabokov would have said with regard to this mounting American tragedy, “Look at this tangle of thorns.”