Home / sports / Wladimir Klitschko admits the resumption of a career

Wladimir Klitschko admits the resumption of a career 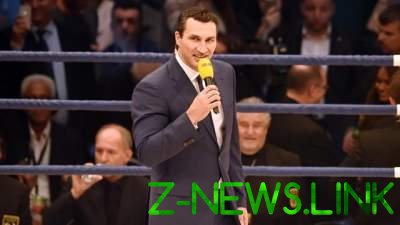 The former world champion in the heavyweight Wladimir Klitschko does not exclude that they will find in themselves the motivation for a new high-profile fight.

Klitschko has announced his retirement in August of this year, and a farewell fight legendary heavyweight was held on April 29 in London – a 41-year-old Ukrainian gave an impressive back Anthony Joshua, losing by knockout in the 11th round.

“Is there a fire in me and if I have the motivation? The answer to both questions: Yes. But to return need a good reason. Unfortunately, most often this is due to finances, as many athletes were recognized bankrupt.

But the fight one guy out of the ring against the other of the octagon, as in the case of Mayweather and McGregor out of my sight. I have other interests that excite me,” said Klitschko in an interview with the British tabloid “The Sun”.

After retirement, Wladimir Klitschko oversees his company “Klitschko Ventures”, deals with the charitable Foundation “Klitschko Foundation”, regularly appears at public events, spends time with his family, travels extensively and continues to be a prominent figure in the world of professional Boxing.

See also:  Klitschko admitted as subordinates call him back