Home / WORLD / With US under attack in Iraq, Biden needs to question why America is there at all rather than fight fire with fire

With US under attack in Iraq, Biden needs to question why America is there at all rather than fight fire with fire 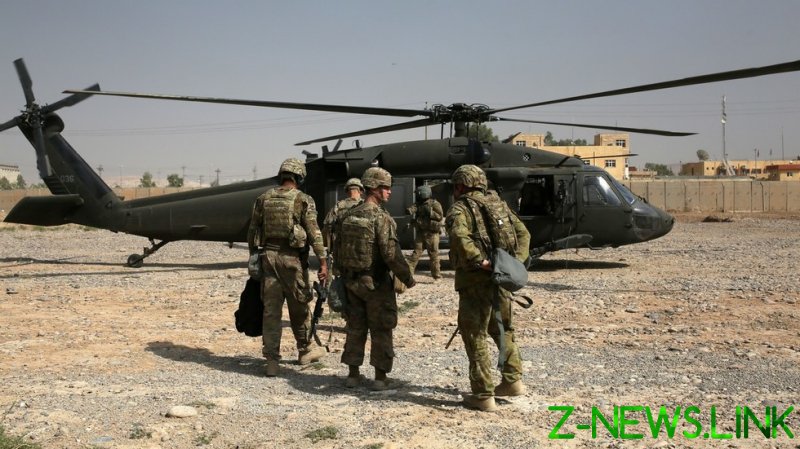 Tuesday saw another rocket attack in Iraq against a US military base. A total of 10 rockets were launched at the Ain al-Asad facility, where American and coalition forces are stationed. As in a previous attack at Irbil last month, one allied civilian contractor was killed.

The last time this happened, Joe Biden’s administration responded with an airstrike against Iranian linked militias active in Syria, blaming Tehran for the situation as the two countries haggle over potential talks concerning their nuclear deal.

If it transpires that the fatality is an American civilian, the president may be tempted to reach for the trigger again, claiming it is yet another “defensive” measure to deter Iranian aggression.

But that claim is disingenuous. While it has become a repeated theme over the past year for Shi’ite militias to attack US bases with rockets, one ought to remember that this is their country. It’s not America’s.

The West constantly feeds us the one-sided notion that attacks on American soldiers in Iraq are an act of aggression and a crime against the peace, and not, in fact, the other way round. The US has no real business being in Iraq, and never did. The Iraqi government doesn’t want the Americans there – but doesn’t seem to have a choice – and bar the Kurds, neither does its population at large. Being majority Shi’ite, they largely have a natural affinity with neighbouring Iran.

Iraq is a divided country, to the extent that the state itself lacks legitimacy and is chronically unstable. It was created by the British out of former Ottoman land via the Sykes-Picot agreement in 1916, whereby London and Paris collaborated to draw lines on a map and create new client states to meet their respective strategic and economic interests.

In creating the nation that would be known as Iraq, the British Empire lumped together conflicting Sunni and Shi’ia Arabs along with a proportion of Kurds in the north, who were denied their own state. The product has been decades of sectarian and inter-ethnic strife, regularly exacerbated by Western interventions.

The result of such instability gave way to the Ba’athist regime of Saddam Hussein in the 1970s. He ruled the country through his Sunni minority ties and espoused an ideology of secular Arabist nationalism, mitigating the sectarian conflicts within.

However, we all know how that ended. Saddam’s regime was deposed in 2003 via an illegal war waged by the US and the UK, who falsely claimed that he held weapons of mass destruction and had links to terrorist groups (despite his secularist ideology). George W. Bush’s administration proceeded to implement a new government in Baghdad and attempted to refashion it as a democracy.

However, this change hasn’t had the desired results. The US regime change served to pour petrol on the bonfire of Iraq’s sectarian divisions, with the new democracy giving the Shi’ia majority dominance over the Sunni minority. This has had two major consequences.

Firstly, it led to the rise of Al-Qaeda and then Islamic State (IS, formerly ISIS) within the country, the former waging an insurgency against the perceived foreign occupiers and the latter creating an ill-fated but atrocity-filled caliphate in the country’s north.

Secondly, and taking a more long-term view, the new post-Saddam Shi’ia character of Iraq has created an obvious closeness to its prominent neighbour, the global centre of Shi’ism itself, Iran.

Of course, American policymakers think in absolutes. The only conclusions they draw from this situation is that Iran has a malign influence in Iraq and should be contained. What they have failed to do is understand how growing anti-Iran sentiment from Washington has, in fact, exacerbated tensions in Iraq itself.

Iranian militias in the country are not a foreign occupying force, in the way US troops are; they have organic legitimacy and support. Protests at the US embassy in Baghdad have proven popular among locals, and after the assassination of Qassem Soleimani last year, Iraq’s parliament even passed a motion for US troops to leave. To nobody’s surprise, this was ignored, but the writing on the wall is clear: the US is not welcome in Iraq.

Of course, this will not change Washington’s perspective. Biden may be tempted to respond to the Ain al-Asad attack with military action that again targets Iranian groups. But they aren’t the aggressor. Such airstrikes only serve to exacerbate anti-American sentiment in the Middle East, creating a vicious cycle which further propels legitimacy for militant actions within Iraq.

Therefore, rather than again replying with a trigger-happy military response to the latest provocation, the Biden administration should really question whether the US has any legitimate business being in Iraq at all. It cannot overlook that America not only turned up uninvited to the country in 2003, but has long outstayed its welcome. The Iran bogeyman seems to make us all oblivious to that truth.