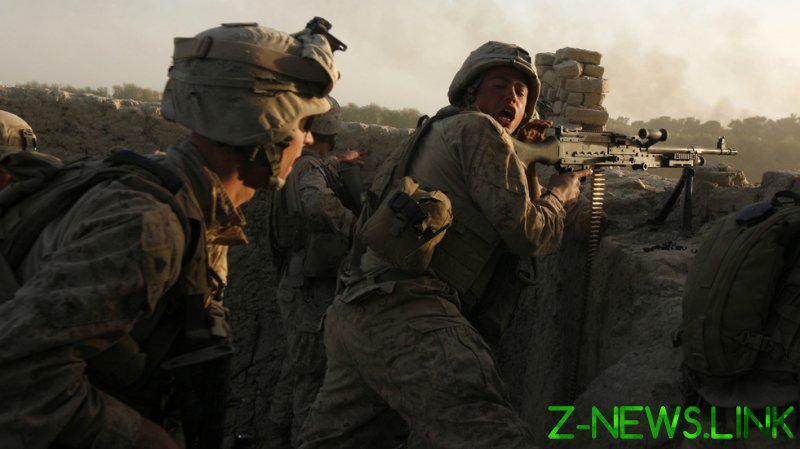 The agreement signed in Doha in late February 2020 sets May 1 as the deadline for a full withdrawal of foreign troops from Afghanistan. The Pentagon currently has 2,500 service personnel deployed in the country, with NATO allies fielding some 7,000 more. Under the agreement, the Taliban pledged to make sure the territory under its control is not used by international terrorist groups to launch attacks on the US and to negotiate a peace deal with the US-propped government in Kabul.

While the Taliban did deliver on the promise it gave a year ago not to attack foreign troops, any hope of a reduction in violence in Afghanistan has faltered in the year since. The Biden administration has therefore ordered a review of the agreement, and “the overwhelming consensus among Afghan leaders, foreign diplomats and Western army officers” is that “the US will abandon the deadline,”according to the Sunday Times.

The prediction in the British newspaper comes from veteran war correspondent Anthony Loyd and follows a slew of other news reports outlining Biden’s Afghanistan conundrum and opinion pieces that rationalize breaking the deal.

The Democratic president has inherited a “mess” from Trump and has no good options, according to CNN, which said NATO allies are “growing increasingly concerned” about the situation. If he does withdraw, he would share some of the blame “if there is a collapse of the elected Afghan government,” the New York Times said. And a Taliban takeover would be disastrous for human rights, especially for the rights of women, Deutsche Welle warned.

Keeping Trump’s word and leaving now “would carry a reputational risk for the United States,” because it would “embolden jihadists and perhaps rejuvenate their movement, which has been in retreat,” columnist David Ignatius said. “And there would be an unmeasurable cost to American credibility.” So, of course Biden should listen to his head, not his heart, and keep “a small but sustainable force in Afghanistan,” which would cost relatively little and give the benefit of “checking terrorists, supporting NATO allies, and giving the Kabul government a fighting chance.”

The nudging press stops short of calling the Doha agreement “the worst deal ever made” the way Trump did with the Obama-era nuclear deal with Iran, but they might just as well have done so. The accord with Tehran was scrapped by Trump, but Biden is reluctant to simply deliver on the commitments made by Obama, even if it was one of the crowning achievements of his former boss’ diplomacy. With the Doha deal, history may repeat itself.

But if Biden follows the advice and reneges on the terms agreed to by his predecessor, how will it be read by the Taliban? Or Tehran, or Pyongyang, or Beijing, or Moscow? Probably as the latest proof that a deal with Washington is not worth the paper it’s written on.

The pattern of the US back-pedaling on its promises once there’s a change of leadership in the White House existed long before Trump. This was the case with assurances made to Soviet leader Mikhail Gorbachev that NATO would not expand into Eastern Europe after the reunification of Germany, for example.

The same thing happened with the 1994 Agreed Framework with North Korea. It was meant to prevent Pyongyang from going nuclear, and thus offered it some concessions, such as building proliferation-proof nuclear power plants. But the George W Bush administration eagerly scrapped it, courtesy of one John Bolton.

Even if given to an ally, Washington’s word is not necessarily solid. Pakistan, for instance, was famously denied the right to purchase F-16 fighter jets after the Soviet withdrawal from neighboring Afghanistan in 1989 made Islamabad a less crucial partner for the US.

Proponents of US global dominance, such as Robert Kagan, say the US is indispensable as a custodian of liberal world order and lament the fact that many Americans are not willing to embrace this role. That they “refer to the relatively low-cost military involvements in Afghanistan and Iraq as ‘forever wars’ is just the latest example of their intolerance for the messy and unending business of preserving a general peace and acting to forestall threats,” the neoconservative commentator and spouse of Victoria Nuland, the Biden-nominated under-secretary of state for political affairs, said in a recent opinion piece.

The ‘low cost’ in Afghanistan was 3,500 dead coalition troops and over $2 trillion dollars in direct and indirect spending. So, what does the US have to show for it? The longest-lasting war in its history that nevertheless failed to produce a self-sustaining government in Kabul. Withdrawal may be perceived as the US losing the war to the Taliban, but what a victory is supposed to look like remains a mystery.