Home / WORLD / With its plan to unite Eurasia from sea to sea, Russia is betting the days of total US economic supremacy are now coming to an end

With its plan to unite Eurasia from sea to sea, Russia is betting the days of total US economic supremacy are now coming to an end 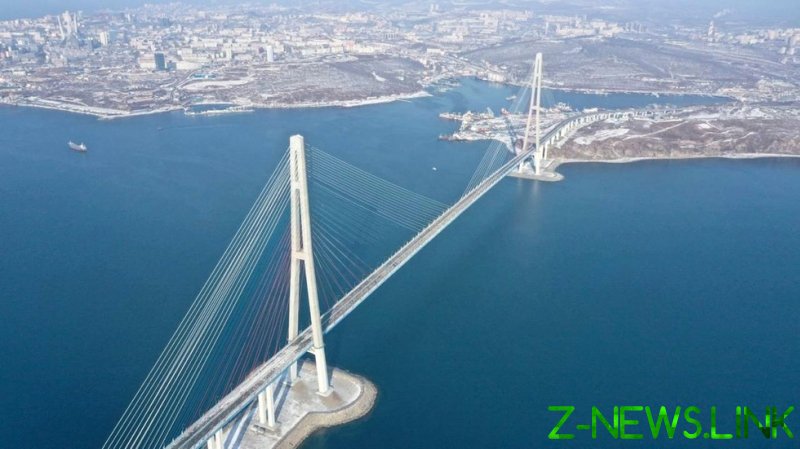 The annual Eastern Economic Forum, held in Vladivostok, has just come to an end. Focusing on the development of Russia’s Far East and enhancing interconnectivity between Russia and Asia, it has become a key arena for the promotion of Russia’s Greater Eurasian Partnership.

The Partnership is a relatively new initiative. Ever since former Soviet premier Mikhail Gorbachev’s concept of a Common European Home, Russia has pursued the objective of creating an inclusive Europe without dividing lines. The aspirations for Greater Europe unofficially ended in 2014 with the Western-backed ‘Maidan’, which overthrew a democratically elected government in Ukraine, and confirmed that Moscow would have no place in the new Europe. Instead, it would be organised solely around the EU and NATO. Russia has since abandoned the Western-centric foreign policies it had pursued for the past 300 years, since Peter the Great first attempted to “return” Russia to Europe.

The Greater Eurasian Partnership is considered a more feasible strategy, in which partnership with China aims to enhance economic connectivity to integrate Europe and Asia into one large, united continent. This is an appealing strategy for Russia, as it has found itself at the dual periphery of economic development in both Europe and Asia, while the concept of Eurasia allows Moscow to position itself at the epicentre of both East and West.

The objective of the Greater Eurasian Partnership is to develop a geoeconomic infrastructure that supports a multipolar political system, replacing the declining US-centred format of globalisation of previous decades.

Geoeconomics can be used either for dominance and hegemony, to create a system of ‘sovereign unequals’, or it can be used to establish a multipolar system of ‘sovereign equals’. Either way, geoeconomic power entails the ability to skew the symmetry of dependence. Simply put, when one side is more dependent than the other, the less dependent and more powerful state can extract concessions and political power.

Geoeconomics can be organized into three pillars: strategic industries, transportation corridors, and financial instruments. The efforts to link nation-building to industrialisation in the 19th century have striking similarities to the geoeconomics of region-building in the 21st century. Britain imposed its hegemony on the world in the 19th century by dominating these three economic pillars: a leading manufacturing industry, dominance of the seas and key maritime corridors, and control over the main banks and trade currency.

To reduce its excessive asymmetrical economic dependence on Britain and its subsequent intrusive political influence, the US aimed to create a system of sovereign equals. The solution was the three-pillared American System: a domestic manufacturing industry, railroad/ports, and a national bank. The French and the Germans adopted similar economic policies to improve the symmetry in relations and thus replace British hegemony with a more balanced system.

Towards the end of the 19th century, Russia eventually adopted the same three-pillared economic structure: a formidable industrial policy to develop domestic strategic industries, and an abundance of railway transportation (including the trans-Siberian railroad) to connect its vast territory and connect Europe with Asia, and it made efforts to increase its financial autonomy. Towards the end of the century, it had transformed itself into one of the fastest-growing economies in the world.

The purpose of the Greater Eurasian Partnership

The US replaced the position of Britain as the hegemony and had, until recently, enjoyed undisputed dominance over the international economic system by controlling the leading high-tech digital industries and the flow of natural resources, the world seas and the main transportation corridors, while hosting the leading banks and cementing the US dollar as the world’s major trade/reserve currency. This asymmetrical economic interdependence has resulted in one centre of power and one set of cultural values being imposed on the rest of the world.

There is a natural inclination to balance a hegemon to restore sovereign equality. Even US allies seek to establish strategic autonomy. Case in point, the EU is largely an effort to establish a more equal partnership with the US by pursuing common industrial policies, securing favourable transportation corridors and energy pipelines, and establishing an EU development bank and the Euro as a global currency.

The US has accepted the geoeconomic rise of the EU to the extent that it pursues collective Western hegemony under Washington’s leadership. The same acceptance is not extended to rival powers such as China or Russia, however. The US’ strategy for upholding its dominant position is the same as the strategy of the British before it – to maintain divisions on the European and Eurasian continent to prevent the emergence of any state or collection of states that can challenge its primacy.

However, as the relative power of the US declines, it becomes ever more difficult for it to act as a ‘benign hegemon’ without abusing its central administrative role in the international economy. It increasingly uses its control over high-tech digital industries, transportation corridors, banks and the dollar to sanction and weaken adversaries. More recently, it has demonstrated its willingness to also coerce geoeconomic loyalty from allies who dare to buy Russian gas or weapon systems, Chinese 5G and other digital products, or to trade with Iran or other US adversaries.

The Greater Eurasian Partnership aims to facilitate the natural reorganisation of the international economic system as the era of US global primacy comes to an end. Decentralisation away from a US-focused system will be achieved with economic connectivity across Greater Eurasia, and by diversifying and creating pockets of national strategic autonomy to avoid excessive reliance on any one state.

In a multipolar system, there is a balancing mechanism against states that use asymmetrical economic dependence as a tool for unwarranted political influence, or as a weapon. Thus, both adversaries and allies are pursuing strategic autonomy from an increasingly coercive US.

Similarly, if Beijing uses other states’ economic dependence to bully or extract excessive political concessions, then there are a multitude of other centres of power that will reduce their reliance on China. This mechanism suggests China will have incentives to be the ‘first among equals’, as opposed to seeking dominance and hegemony.

It is pursuing a three-pillared geoeconomic initiative by developing technological leadership via its China 2025 plan, new transportation corridors via its trillion-dollar Belt and Road Initiative, and establishing new financial instruments such as banks, payment systems and the internationalisation of the yuan. Russia is similarly pursuing technological sovereignty, both in the digital sphere and beyond, as well as new transportation corridors such as the Northern Sea Route through the Arctic, and, primarily, new financial instruments.

What the Greater Eurasian Partnership should focus on, therefore, is cooperation between and integration of national geoeconomic platforms and other formats encouraging Eurasian integration. For example, China’s Belt and Road Initiative is harmonised with the Moscow-led Eurasian Economic Union under the patronage of the Shanghai Cooperation Organisation. India, South Korea, Kazakhstan, Turkey, Iran and a variety of other states have their own distinctive Eurasian integration initiatives that could be accommodated and harmonised under the concept of a multipolar Greater Eurasia of sovereign equals.

A place for Europe?

The EU has also been invited to partake in the Greater Eurasian Partnership as a way to end the zero-sum formats in Europe that have fueled tensions with Russia in the past. As Europe’s economic interests gradually shift to the east, Europe is finding itself between the trans-Atlantic region and Greater Eurasia.

In my recent book ‘Europe as the Western Peninsula of Greater Eurasia: Geoeconomic Regions in a Multipolar World’, I explore the risks, opportunities and dilemmas for the EU. The question now is whether its leaders will realise how rapidly the world is changing, and take advantage of those opportunities.