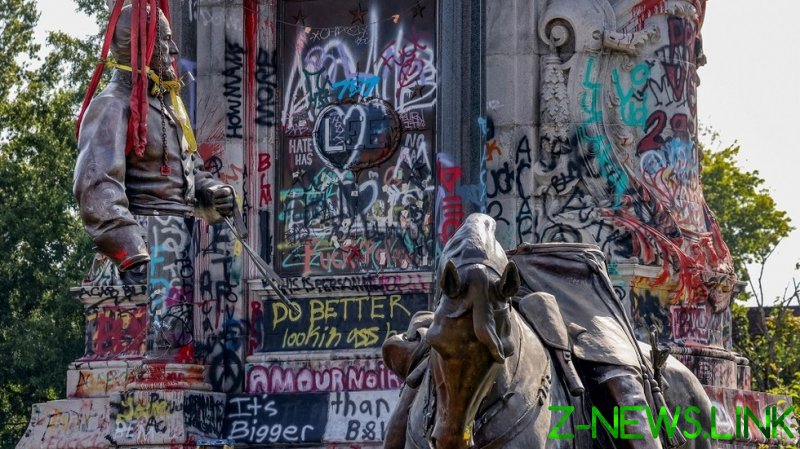 Municipal workers in Richmond, Virginia, removed a giant equestrian statue of Lee on Wednesday, bringing to a close a long campaign by activists to topple the monument to the Confederate general.

A time capsule, buried under the statue since 1887, was also removed, as in the words of Governor Ralph Northam, it contained artifacts “related to the Confederacy.”

Lee’s 12-ton statue was cut into two pieces, and the time capsule will shortly be replaced by one that better reflects “who we are as a people in 2021,” said Northam, a Democrat.

The list of items to be included portray an extremely liberal image of Virginia. They include a photo of a black ballerina protesting in front of the statue, its plinth defaced with graffiti, a ‘Black Lives Matter’ sticker, and an African Kente cloth designed to commemorate 400 years since the first slaves landed in the US.

The new capsule will also include several face masks, an expired vial of Covid-19 vaccine, a ‘New Virginians’ booklet with portraits of 24 immigrants, various LGBT and ‘Pride’ paraphernalia, a poem in braille, a ‘Stop Asian Hate’ pamphlet, and a photo of Virginia police helping colleagues in Washington, DC after the January 6 pro-Trump riot on Capitol Hill, among other things.

The list of items was lauded by the governor, but it was also swiftly ridiculed online.

“Congratulations future capsule finder!” one commenter on Twitter wrote. “You have discovered a trove of items cached here during the stupidest time in human history.”