Home / WORLD / With every other argument against the 2nd Amendment failing, a professor has finally found the killer blow: yep, it’s ‘RACIST’

With every other argument against the 2nd Amendment failing, a professor has finally found the killer blow: yep, it’s ‘RACIST’ 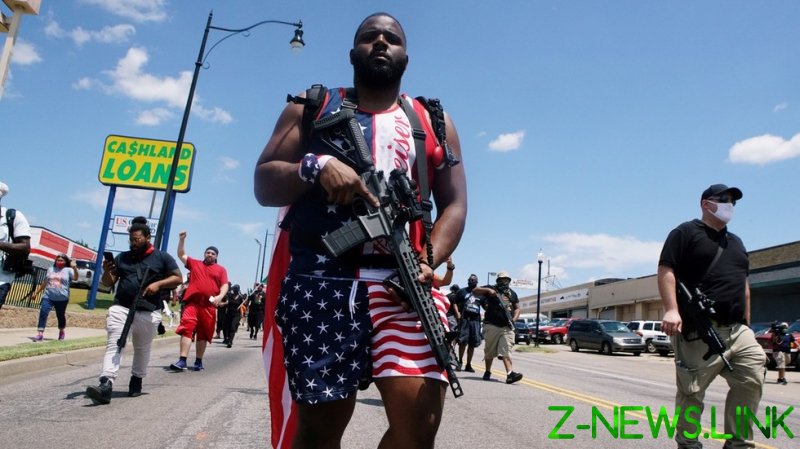 Anderson, an African-American studies professor at Emory University in Atlanta, is promoting her new book, which provides critical race theorists the dual benefits of vilifying the founding fathers and telling us that the gun rights enshrined in our Constitution were not about individual liberty but – you guessed it – racism. And, of course, the mainstream media is lapping it up as an irresistible opportunity to connect yet another pet propaganda campaign to race.

In MSM land, all roads lead back to skin color, and there’s no better way to signal virtuousness while discrediting the opposition than to call something racist.

In this case, the target is gun rights – one of the fundamental liberties that made America a relatively free nation. People aren’t quick to give up a right that’s essential to protecting one’s person, property, family, and freedom, so, when hyping mass shootings isn’t enough, rebranding this liberty as bigotry is an appealing ploy.

On Thursday, the taxpayer-funded National Public Radio (NPR) news platform declared in a headline “Historian uncovers the racist roots of the 2nd Amendment.” Notice the language of the propagandist. Rather than introducing the idea with the objectivity we’re supposed to see in a news headline, NPR says “uncovers.” It’s conclusive. Roots that are uncovered are factually there – not something that someone is asserting. NPR militates against our constitutional rights, and we get to pay for it.

Interviewed by NPR, Anderson claimed, “This isn’t an anti-gun or a pro-gun book. This is a book about African Americans’ rights.”

If that were the case, she would have focused on violations of the gun rights of black people. Instead, she uses examples of such discrimination to essentially make the argument that the Second Amendment started out as racist, continued to be racist, and remains racist today.

And other media outlets, such as CNN and the New York Times, jumped on board with NPR to promote Anderson’s epiphany. It’s no coincidence that the same organizations that frequently oppose gun rights and constantly use race to divide people have found that an intersection of these two narratives is delicious.

Anderson uses her superpower as an aggrieved party to peer into the minds of the founding fathers and concludes that they weren’t thinking about freedom when they created the Constitution. In her view, it was all about making sure individual states had the ability to put down slave uprisings without relying on the federal government.

Not coincidentally, a Native-American historian wrote in a similar book in 2019 that the racist Second Amendment was about forming militias to attack Native-Americans and take their land.

These activist “educators” miss the point – either accidentally or on purpose – that the founders understood our individual rights to be God-given, not government-granted privileges, and that the Constitution was written to block the government from infringing those essential freedoms. And they pretend that the framers didn’t mean what they said when they spoke about these rights.

They weren’t focused on hunting, their already well-established ability to shoot slaves or even stopping burglaries. The core reason for our right to bear arms is to defend against tyrannical government – the same sort of government that NPR, CNN, etal, embrace.

James Madison, who wrote the Second Amendment, said, “I prefer dangerous freedom over peaceful slavery.” As he said in the amendment itself, an armed militia of the people is “the best and most natural defense of a free country.” And he argued that the “ultimate authority, wherever the derivative may be found, resides in the people alone.”

Jefferson was even more explicit, saying, “The tree of liberty must be refreshed from time to time with the blood of patriots and tyrants.” And as he told Madison in 1787, “What country can preserve its liberties if their rulers are not warned from time to time that their people preserve the spirit of resistance? Let them take arms.”

Not surprisingly, the ruling class and its media mouthpieces don’t favor that kind of thinking. They do favor keeping uppity freedom lovers fearful of being branded with the scarlet R, the great assassinator of personhood in American society.

Anderson does this for a living. Her past books have included “White Rage,” which capitalized on the false narrative regarding the police shooting of Michael Brown in 2014 and argued that angry white people are embittered and violent over black progress. Just to make sure that younger readers were properly indoctrinated with “White Rage,” it was adapted in a follow-up book aimed at teens.

Anderson later put out a book making the popular argument that requiring voters to have an ID is a tactic to stop black people from voting. That one came out in 2018, the year after Barack Obama completed his second term as president.

The author is correct in observing that slaveholders and others who sought to oppress black people didn’t want them to have and exercise full gun rights. They knew how powerful this fundamental aspect of freedom is – and how it’s not conducive to subjugating a group of people.

Professor Anderson, NPR, CNN and gun-grabbing politicians know that, too.

Tags against amendment argument every failing other professor