Home / WORLD / Will someone tell him? Morning Joe brings up EISENHOWER to counter Trump’s critique of Pentagon & military industrial complex

Will someone tell him? Morning Joe brings up EISENHOWER to counter Trump’s critique of Pentagon & military industrial complex 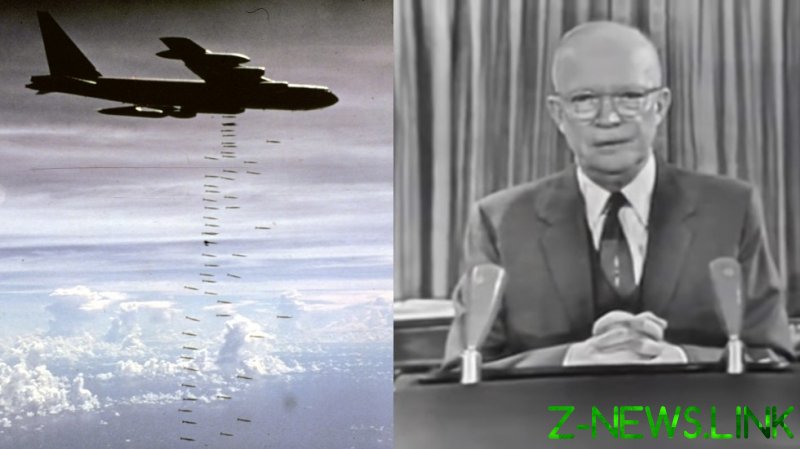 “I’m not saying the military’s in love with me,” President Donald Trump said in a Monday press conference, addressing recent anonymously-sourced claims that he has insulted military members in private.

“The soldiers are, the top people in the Pentagon probably aren’t, because they want to do nothing but fight wars so all of those wonderful companies that make the bombs and make the planes and make everything else stay happy,” he continued.

While the term military industrial complex was not directly used in the moment, it’s clear this is essentially what the president is referring to. Scarborough, in his own tweet reaction, seems to be unaware of this – and of the problem in general.

“This is such a deeply ignorant and insulting view of American military leadership. From Dwight Eisenhower to Colin Powell, it has been our military leaders familiar with the hell of war who have hated it the most,” he tweeted.

As some critics suggested, Scarborough should probably educate himself on the fact that Dwight D. Eisenhower, a five-star general during World War II who would become president, actually coined the informal term that has become so popularly used by anti-war activists on both sides of the political aisle.

“In the councils of government, we must guard against the acquisition of unwarranted influence, whether sought or unsought, by the military-industrial complex. The potential for the disastrous rise of misplaced power exists, and will persist,” he said in his farewell address to the nation in 1961.

Eisenhower warned the country about corporate and personal agendas taking control of a military system being taken over by ballooning budgets and political bureaucracy. The speech is often cited today as a prophetic warning relevant to the US’ unprecedented spending and global policing when it comes to its military.

Scarborough blunder didn’t stop there, as he also brought up Colin Powell – an odd choice for tto cite when talking about military leaders being “anti-war,” as Powell is most famous for his role in arguing for the US to invade Iraq in 2003 when he was secretary of state. The military invasion is often referred to today, even by President Trump, as an example of an unjustified and politically motivated decision, one based on the unfounded claim that the country was potentially harboring weapons of mass destruction and posed a direct threat to the US.

While Trump detractors have had reactions similar to Scarborough’s and used Trump’s latest soundbite as further proof of his alleged disdain for the military, others have celebrated the criticism.