Home / WORLD / ‘Will of the people’ against ‘dictate of the West’: Highlights of Putin’s speech at signing ceremony for treaties of accession

‘Will of the people’ against ‘dictate of the West’: Highlights of Putin’s speech at signing ceremony for treaties of accession 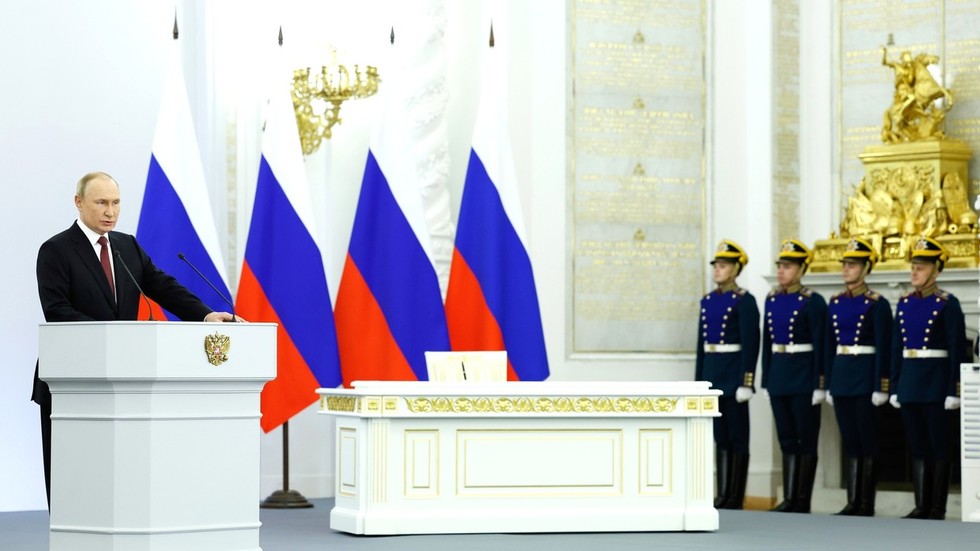 Russian President Vladimir Putin delivered a historic speech on Friday at a ceremony in Moscow at which he signed treaties paving the way for the inclusion of four former Ukrainian regions into the Russian Federation.

Among other things, the president commented on the future of the four regions within Russia, potential talks with Kiev, and the continued neocolonialist policy of the US and its allies, which he says is at the root of many modern crises.

Below are some of the key points Putin made in his address.

Russia will never betray those who trust it

The people of Donbass and those living in the regions of Kherson and Zaporozhye “undoubtly” had a right to self-determination guaranteed by the UN Charter, Putin said, adding that they “had their say.” Russia will never betray their choice, the president stated, adding that “we will defend our land with all the forces and resources we have.”

Putin also vowed to restore all of the infrastructure in the four regions that has been damaged in the conflict between Moscow and Kiev. “Together we will make sure that citizens in the new regions can feel the support of all the people of Russia, of the entire nation, all … regions of our vast Motherland.,” he said.

Russia is open to talks with Kiev

Putin has called on the Ukrainian government to “immediately” cease all hostilities and return to the negotiating table. “We are ready for this,” he said.

However, Moscow will not discuss “the choice of the people in Donetsk, Lugansk, Zaporozhye and Kherson,” Putin maintained, adding that this choice has already been made clear. He also urged Kiev to treat this choice with respect, calling it “the only way to peace.”

The Russian leader accused Western leaders attempts to “plunder the world” through the “the domination of the dollar and technology.” The West will do anything to keep its “neo-colonial system,” he added, denouncing it as an attempt to collect a “an actual tribute from humanity.”

The Western aspirations for continued hegemony are the reason for a global “de-sovereignization” campaign, Putin stated, adding that this involves Western nations turning all other countries around the world into their “vassals” through either coercion or bribery.

“This explains their aggression towards independent states, traditional values and authentic cultures,” the Russian president said, adding that the West seeks to disrupt international and integrational processes it is unable to control.

Western ‘rules-based’ order is a lie

The “rules-based order” supposedly defended by the Western nations is “utter deceit,” Putin said. Western leaders act on the basis of “double standards, or even triple standards” and change these rules when it suits their interests, he added.

It was the West that first violated the principle of border inviolability and then usurped the right to decide which peoples deserve the right to self-determination and which do not, the Russian leader maintained.

He also accused the US of eroding global security by unilaterally withdrawing from the Anti-Ballistic Missile Treaty (ABM) back in 2002 and the Intermediate-Range Nuclear Forces (INF) Treaty in 2019. The Western promises not to expand NATO further to the east turned out to be “dirty deception” as well, he added.

Neo-liberalism is the new totalitarianism

The Western nations divide the world into their “vassals” and those they call a “rogue country” or “authoritarian regime,” Putin said, adding that their denial of other nations’ sovereignty has turned into a new form of “despotism and apartheid.”

The West is still convinced that its “neoliberal culture is an indisputable model for the entire world to follow,” Putin said, calling such views nothing but “racism.” The Russian leader also denounced ‘Russophobia’ as an example of such a racist attitude.

“Western countries have been saying for centuries that they bring freedom and democracy to other nations. Nothing could be further from the truth. Instead of bringing democracy they suppressed and exploited, and instead of giving freedom they enslaved and oppressed,” Putin said.

The world has entered a new era of a “revolutionary transformation,” Putin believes. New centers of power and development that represent the majority of the international community are forming. They are not only ready to openly speak about their interests but to defend them as well, he said.

“The collapse of Western hegemony is irreversible,” the Russian president said. Russia is now fighting for a “just and free” way forward that will leave “dictate and despotism in the past,” he added.