Microsoft is prepared to release in Russia two Xbox One X PUBG and Xbox One’s Minecraft. They are characterized by an interesting package and stylish prints on the bodies of the consoles. 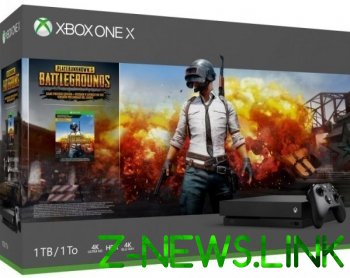 Box Xbox One X PUBG will include a console with a hard drive of 1 terabyte, brand wireless controller, a digital version of the game PUBG, and also a trial subscription to Live Gold service and the library of games Game Pass for a period of exactly 1 month. The issue price will be about 40,000 rubles. In addition, you can grab a joystick with a signature print PUBG total for 6200 rubles, but it was released only 300 pieces.

Xbox One’s Minecraft in the style of all of the forgotten Minecraft will cost significantly less – it will be yours for 24,000 rubles, and with it you will get a subscription to Game Pass for a month, as well as access to Live Gold, but only for two weeks. In addition, the box will be wireless controller, the console itself, the first season of Minecraft: Story Mode – The Complete Adventure plus full digital version with the update Aquatic and kit Explorer’s Pack. The release of both consoles in Russia is expected any day now, but let’s not forget that the global market for game consoles Sony PS4 is an unquestioned leader, and there are a number of good reasons.