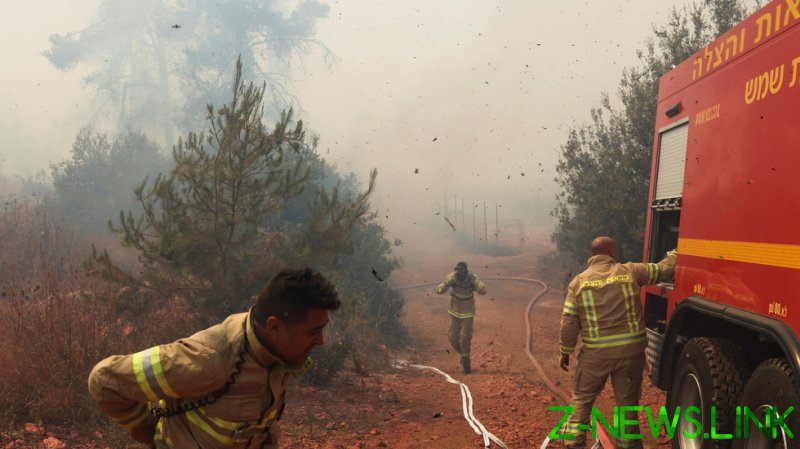 Residents of the Ma’ale HaHamisha community, populated by almost 800 people, were ordered to leave their homes as the flames approached. The fires also prompted the closure of some roads and highways, and Israel Railways briefly halted services on the high-speed line between Jerusalem and Tel Aviv.

A session of Prime Minister Benjamin Netanyahu’s corruption trial, currently underway in Jerusalem, ended earlier on Wednesday due to the blaze.

A pall of thick black smoke hung over the city, with the authorities advising those with heart and lung diseases, as well as the elderly, children and pregnant women, to stay indoors.

All the firefighters in Jerusalem were mobilized to contain the wildfires, with their colleagues from other parts of the country also called in to help. Some 70 crews, ten planes, and two helicopters were deployed for the operation.

The fire service announced later on Wednesday that the blazes were no longer a threat to homes in the area, but it said they have not yet been fully contained.

The fires – the latest of many in the country in recent days – appeared to have been man-made and may have been started by arsonists, Fire and Rescue Commissioner Dedi Simchi told Channel 13.

“We did not see any lightning in the skies over the country today, and we will clarify if this was arson or not later,” Simchi said. Army Radio later reported that police have already launched an investigation to check if arson was the cause of the flames.

“Hundreds of acres of forest have been burned away, perhaps even more” in the fires, Jewish National Fund forester Gidi Bashan said in a statement about the blazes, adding that the lost trees included many hundred-year-old pines.