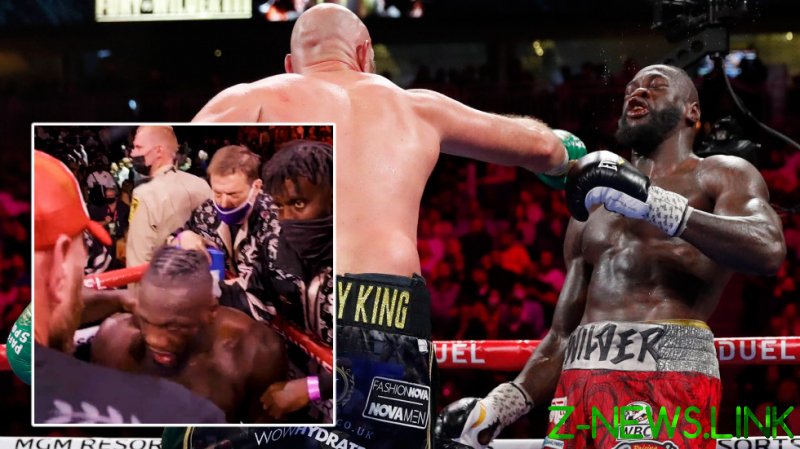 In the clip from the immediate aftermath of the memorable showdown, towering Englishman Fury can be seen approaching Wilder as he sits on his stool attempting to regain his senses following his clobbering 11th-round knockout.

An abundance of bad blood had flown between the pair since Fury first knocked Wilder out in February 2020, with frequent exchanges of insults over the American’s decision to brandish a range of excuses, including outlandish claims of sabotage efforts from his own team and glove-loading by his opponent.

While even the most bitter of rivals tend to temporarily put their differences aside after contests, Wilder appeared to be in no mood to relent on the ammunition he has gifted to those who had accused him of being a sore loser in the build-up.

“No love,” muttered the feared puncher, shaking his head in a dazed state before being taken to hospital. “I don’t respect you.”

The WBC title holder then turned to a person in the ring who appeared to be a member of Wilder’s entourage and insisted: “Listen, I’ve never cheated in my life.

“I played fair and square. He’s got a bad hatred towards me, I don’t know why.

“Let me tell you, he lost like a man tonight. He put me down three times, I put him down four; great heavyweight fight.”

Full of bluster in the weeks before the fight, Wilder kept quiet after the second defeat of his career – and he showed more class than he had on his stool in his first statement since the scrap.

Describing the trilogy decider in Las Vegas as “a hell of a night”, ‘The Bronze Bomber’ thanked his team and fans and confessed he “would be lying if I said that I wasn’t disappointed in the outcome.”

He then credited god for “allowing me to give the world another part of me that’s driven with passion and determination”  – giving him an experience, he said, that was “far greater than what I expected to happen.”

“We didn’t get the win but a wise man once said the victories are within the lessons,” he added, writing after his trainer, Malik Scott, predicted that the 35-year-old will not retire.

“I’ve learned that sometimes you have to lose to win. Although I wanted the win, I enjoyed seeing the fans win even more.

“Hopefully, I proved that I am a true warrior and a true king in this sport. Hopefully, we proved that no matter how hard you get hit with trials and tribulations, you can always pick yourself up to live and fight again for what you believe in.

“Last but not least, I would like to congratulate [Fury] for his victory and thank you for the great historical memories that will last forever.”

The Brit responded to the post-fight footage by commenting: “Respect and sportsmanship. Time will tell.”

Upon seeing Wilder’s statement, the unbeaten giant responded: “The greatest trilogy of all time.”

Anyone hoping that there would be no further pronouncements that could be construed as excuses from Wilder’s team would be mistaken.

“He’s still in pain with the hand and his equilibrium was off somewhere around the third round – that’s why his balance wasn’t the same,” said Wilder’s co-manager, Shelly Finkel, telling ESPN that his fighter had broken his hallowed right hand in the middle of the fight.

“He feels he trained so hard and then the two incidents – no disrespect at all to Fury – he put in all that effort and wasn’t able to fight him healthy.”

Finkel expects Wilder to have surgery on Monday, miss three-and-a-half months of training and fight again by early next summer “as long as he’s healthy and he’s good and he’s up to it.”

Finkel played down Wilder’s reception for Fury. “After the fight you come back to your corner, you have a broken hand, you’re disoriented. Your mind isn’t there,” he suggested.