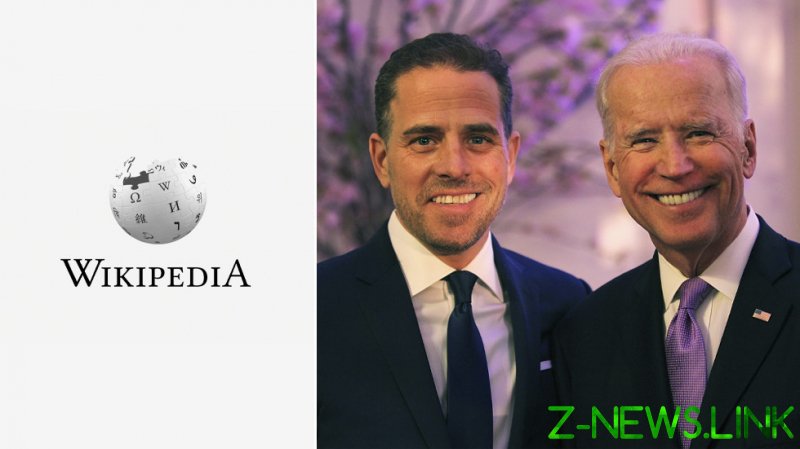 Hunter Biden was the subject of an explosive report last week as the New York Post published emails alleging that he involved his father in dodgy business dealings in Ukraine and China.

While the story is still unfolding, the Wikipedia page for Hunter Biden simply states that “he and his father have been the subjects of debunked right-wing conspiracy theories pushed by [President] Donald Trump and his allies.” The curious framing was highlighted by conservative commentator Ian Miles Cheong on Twitter on Tuesday.

Eight sources are listed for this one sentence, intending to support the view that any accusations of corruption against the Democratic presidential candidate and his son have already been proven false. In recent days, Wikipedia editors have been engaged in regular spats about the inclusion of the word “debunked.”

The eighth source was added on Sunday by a frequent contributor to Biden’s son’s page, whose username is ‘Soibangla’. A regular editor of American political topics on Wikipedia, Soibangla was previously found tweaking pedophile sex-trafficker Jeffrey Epstein’s page, specifically to note that there is “no evidence” that he and former President Bill Clinton were “friends” – despite the ex-commander-in-chief traveling on the disgraced financier’s plane 26 times, according to flight logs.

Curiously, the same Soibangla is one of the top authors on a new Wikipedia page titled, ‘Biden–Ukraine conspiracy theory’. The page was created on October 15, the day after the Post published Hunter’s alleged email history. The article calls the controversy “a series of false allegations” and references an almost identical list of eight sources to back it up.

A war over Hunter Biden’s page has been raging since December 2019, when the word ‘debunked’ was initially added in reference to the scandal involving the former VP’s role in the firing of a Ukrainian prosecutor who said he was investigating the Burisma gas company where Hunter sat on the board.

It kicked off again on September 30, when user ‘Php2000’ removed ‘debunked’, noting that “Sources state [Hunter Biden] was making 50,000 USD a month as a board member in Ukraine gas company. Hardly ‘debunked.’”

Just two minutes later, according to the website’s timeline, editor ‘Billmckern’ reverted the change, adding, “it’s been debunked and we have consensus language here.”

Php2000 once again deleted the word, explaining that Hunter Biden making a lot of money in Ukraine was a well-documented fact. “What exactly has been debunked?” they asked. “Read the references,” wrote Billmckern a mere four minutes later, once again restoring the controversial phrasing.

It’s not only Wikipedia where an effort to shield the Bidens from criticism has been raging. Social media giants have already come under fire for admitting they tried to hinder the spread of corruption allegations against the former vice president and his son. Just after the New York Post published the alleged leaks, Facebook admitted to shadow banning it, while Twitter outright blocked users from sharing the link to the Post’s story.

President Donald Trump weighed in on the paper’s allegations, calling them the “real deal.” Meanwhile, former White House Chief Strategist Steve Bannon has promised that more is to come.