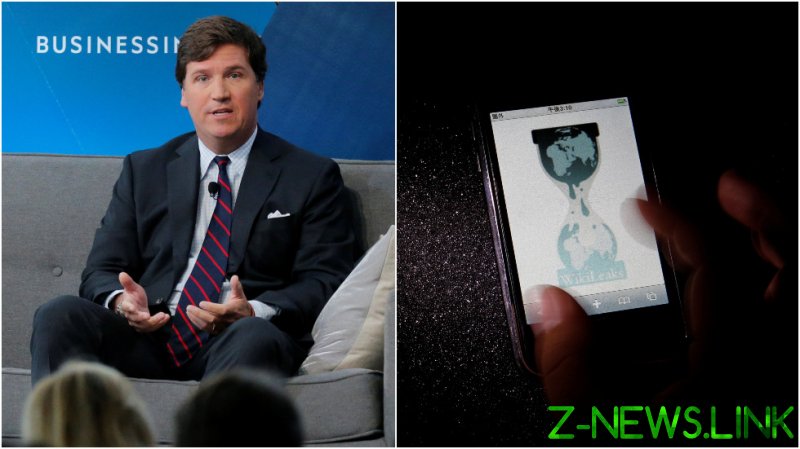 The anti-secrecy group took to Twitter on Monday to share a section of Carlson’s show from earlier in the evening, adding the caption: “Spying on and coercing journalists is not a new [phenomenon] #Assange #TuckerCarlson.”

In the segment, the Fox pundit alleged that a government “whistleblower” had contacted his team to relay a warning that the NSA is “monitoring our electronic communications, and is planning to leak them in an attempt to take this show off the air.”

Carlson said that the whistleblower, whose name or position were not given, also passed along information about a story he is currently working on, which he argued could only have come directly from his own texts and emails.

“The NSA captured that information without our knowledge and did it for political reasons. The Biden administration is spying on us. We have confirmed that,” Carlson said, adding: “Spying on opposition journalists is incompatible with democracy.”

WikiLeaks’ designation of Carlson as a “journalist,” however, did not go over well with his mostly liberal critics, who shot back that the Fox host is more of an “entertainer” than a factual reporter of news.

Some detractors went even further, labeling Carlson a purveyor of not mere entertainment, but “white supremacy propaganda,” though they left that term undefined. Another netizen asked whether he could be considered “comparable” to WikiLeaks co-founder Julian Assange, who was mentioned alongside Carlson in the group’s tweet.

Conservatives leaped to defense of the Fox talent, arguing that the NSA’s alleged spying on the popular host proves Carlson’s journalistic bona fides.

“They’re going after Tucker Carlson because he’s one of the last people on TV actually exposing the powerful,” the Columbia Bugle, an anonymously run conservative commentary account, tweeted.

Republican Representative Lauren Boebert (Colorado) called on the House Oversight and Reform Committee to “thoroughly and immediately investigate” the claim.

“If this is indeed true, criminal charges should be brought on those who have violated this private citizen’s rights,” she tweeted.

Another high-profile conservative and former New York City police commissioner Bernard Kerik called on the GOP leadership to raise the issue at the highest level.

While Carlson noted that Fox had contacted the NSA and submitted a Freedom of Information request about the purported spying “as a formality,” he said they “don’t expect to hear much back,” and that true accountability could only be achieved by lawmakers.

Earlier on Monday, meanwhile, Senator Ron Wyden (D-Oregon) introduced legislation seeking to protect reporters from government surveillance, though not related to the Carlson debacle. He cited abuses under the Donald Trump administration, in which the Department of Justice targeted journalists from CNN, the Washington Post and the New York Times with probes while looking into official leaks.