Home / Society / Why the Soviet Union was an Empire of lies 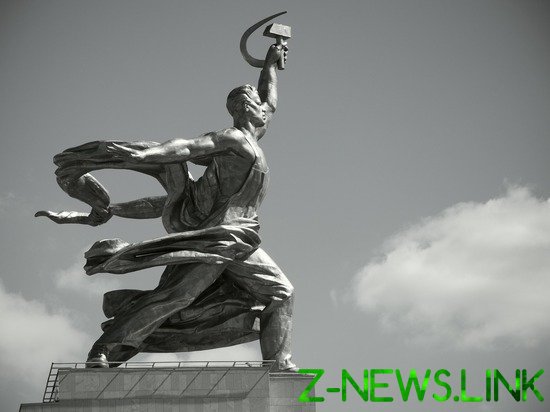 The Communists lied to the 74 year of his reign, and continue to lie today

All 74 years of Soviet Communist rule, the Soviet people lived in conditions of double standards, double standards, within the framework imposed by the propaganda of the ideologically fictional reality and absolutely not appropriate to her true being.

Lies and violence were the two main tools of the Communists to the suppression and enslavement of the masses. Lying Communist Bolsheviks began to seize power during the October armed coup in 1917: false propaganda helped them to seize power.

What exactly lied to the Communists?

Let us consider the slogans: “earth — the peasants!”, “Factories — to workers!”, “Peace for people!”, “All power to the Soviets!”, “Bread for the hungry!”

All these slogans were false, none of the promises has not been fulfilled!

Land to the peasants is not only not given, but taken away and that which was, and almost all the peasants were forcibly driven into the collective farm slavery: the majority of peasants were deprived of their passports, so could not leave the farm, i.e. become serfs! And the money they received hardly worked for their labor. I.e. the peasants, who before the war were 80% of the population, and after the war — 50% were slaves.

Passports to all, without exception, the farmers began to give only from 1976 to 1981 — by the decision of the Council of Ministers from 1974!

Exactly the same lies were about “bread for the hungry” — the entire history of Communist rule is either a total hunger or food shortages. Even in the explanation of the causes of hunger, the Communists have always lied, blaming everything on the drought or crop failure. Yes, in Russia before the Communists had crop failures, but never had such a terrible famine in the 1920s and 1930s, when millions of people died! Only in Holodomor 1932-1933 from hunger and related diseases in Ukraine, the Volga region, the Kuban region, in Kazakhstan died about 7 million people! And the famine was created artificially — the peasants have taken away not only grown their grain, which they had to feed their families, but to seed Fund! Here you have “Bread for the hungry!”

Not better in the Soviet Union was the position of the proletariat, which, again according to the false Communist propaganda, was considered a hegemon, i.e. the leading, ruling class. Of course, no “factories to the workers” nobody gave — all enterprises were transferred to the property of the state, and the workers were forced to work for them, most of the Soviet period — for rations, i.e. just for the food not to die of hunger. It is not an exaggeration and not a figure of speech: if a farmer, even without receiving money, working on the farm for their labor, could still be fed from the garden and, if lucky, something else to sell or trade for industrial goods, the workers, this was not possible! About two-thirds of the Soviet Communist period (50 of 74) of the products was rationed, and get workers the money was not adequately provided with food and industrial goods, i.e. in essence were just pieces of paper.

Attempt to change the situation and to establish the normal supply of the citizens, taken by the Communists in the early 1960-ies, improved the situation somewhat, but quickly drained the economy that has led to shortages of food products are already somewhere in the 1972-1974 years, and since the early 1980s, the deficit has become almost universal.

No better was the case with the slogan “Peace for people!”.

It was zwierzyniecka lie! The Communists waged war, all 74 years of his reign — not only on the territory of the former Russian Empire, but also around the globe. Most of you only know the Civil and the Second world war, some remember about Finnish and Afghan wars, but wars had a few dozen! The Soviet-Polish war of 1920, the Soviet-Chinese conflict of 1929 (and a few episodes in different years), the war in Spain in 1936, the war against Japan — a few episodes in 1938, 1939 and 1945, the Korean war of 1950, Hungary, Laos, Vietnam, Algeria, Egypt, Yemen, Syria, Mozambique, Cambodia, Bangladesh, Angola, Ethiopia, Lebanon, Cuba and so on. In each of these wars has died from a few tens of thousands to several million people.

If you look at the dates, it is difficult to find the year in which the USSR waged a war somewhere. Ie, the world was quite ephemeral.

No less cynical and deceitful was the slogan “All power to the Soviets!”. All ‘ 74 ran the Communists, the Soviets were absolutely decorative, education, and elections to them is pure blasphemy. Party and Komsomol activists provided the one hundred percent voter turnout, and the voters unanimously voted for the one whom the Communists have appointed people’s representatives. In turn popularly elected deputies unanimously approved the decisions of their party — the Communist party.

In fact, there is no socialism in the USSR never was, and there was a version of feudalism with elements of state capitalism. Communist leaders were exactly the same lords: the General Secretary of the Central Committee (Central Committee) of the Communist party could be compared to a king, members of the Central Committee to the Duma boyars, the Secretary to the governors and so on. Interestingly, this was reflected even in the Soviet cinema — view the film “the Servant” directed by Vadim Abdrashitov on the script by Alexander Mindadze, filmed in 1988. The film covers a twenty-year period, from early 60’s until the early 80-ies of XX century. The owner of the field (presumably, the first Secretary of the regional Committee of the Communist party), one of Gudonov, gives its driver the loan house, a wife, a choir, and as conductor for the dog’s devotion and willingness to fulfill any whim.

It is important to note that the 1960-ies — it is the rule of Brezhnev can say lighter version of Communist feudalism.

Before feudalism was tougher and worse — a Communist bar, not so much the gifts its the Chaldeans, how they destroy those who bowed not low and did not rush to lick the boots. By the way, the authors of the film in those years would have been shot — no options. Although all of them are shown — the absolute truth.

Shooting of this movie and its release was only possible thanks to the declared Mikhail Gorbachev glasnost. Because of the policy of glasnost was debunked many years of lies of the Communists, not only ordinary people but also members of the Communist party ceased to believe in the Communist tales.

For many years lie gave the Communists some kind of “indulgence” on the use of violence — they with lies the need to justify its use. In different years the Communists, using propaganda to convince people of the need for the mass killings of representatives of the same people, mass repression, dispossession, weaning food for tens of millions of peasants, the murder and deportation of entire peoples. As soon as was debunked the lie has become a problem and the use of violence. In the end, having lost two of their main instruments of seizure and retention of power — lies and violence — that the Communists lost power. The Soviet Union collapsed like a rotten, rotten tree stump! And, characteristically, encouragingly, none of the eighteen million Communists left to protect the Soviet Union! But the party took allegedly the most ideologically consistent, the most honest, the most dedicated to the cause of the party and the people! And there was a lie, a total lie!

Here is the price of Communist morality!

Of course, the USSR collapsed not only due to the policy of glasnost, perestroika and democracy, Gorbachev declared. The main reason for the collapse was complete failure of the socialist economic system. While the workers and peasants, the Communists took away almost all that they produce, the economy was kept afloat. As soon as it began to strip a little less socialist economy began to rapidly die. The Soviet Union, even bread itself could not provide: since 1961, the wheat is purchased from the USA, Canada and Argentina. Today only one Russian exports of wheat to $ 15 billion per year! But there are other khliborobne former Soviet republics.

For many years we, all citizens of the USSR have seen and realized the falsity of the Communist regime. Every evening in the program “Time” the speakers told us about a record yield, on the implementation and fulfillment of the plan (no five-year plan in the entire history of the Soviet Union were not fulfilled), but in reality we saw empty shelves. Cheese, meat, sausage, coffee and more years were absent in the free market. Half of my life to spend long hours in queues for occasionally appearing to the deficit. In the end, the fridge had a convincing victory over the TV.

The Communist lie was designed to hide the failure of the Communist idea, the unsustainability of the socialist economy, as well as to hide a multi-year crimes of the Communist regime. But murder will out: sooner or later all secret becomes obvious.

Today’s attempts of the Communists and admirers of the Soviet Union to deny it all look pathetic and pitiful — because tens of millions of people found the USSR, and remember his misery, poverty, lies and crime.