Home / WORLD / Why scientists think discovering vaccine side effects is GOOD, as blood clot fears have many in doubt

Why scientists think discovering vaccine side effects is GOOD, as blood clot fears have many in doubt 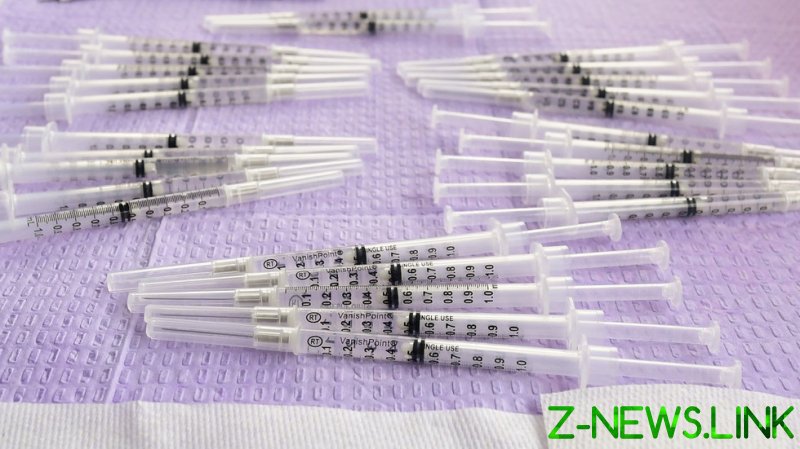 Observing how the battle against coronavirus is progressing in 2021, it could be argued that ‘confusion’ will become the word of the year. The situation with the AstraZeneca vaccine is a clear illustration. Back in March, a number of EU states halted its use when several cases of blood clots were reported after inoculation. When the European Medicines Agency signaled the vaccine is safe, the bans were lifted… only to return later, but this time, for certain age groups.

No surprise people were confused, says Professor Agustin Valenzuela Fernandez, an expert in virology, immunology and pharmacology from the Spanish University of La Laguna.

“When there’s no clear information, the doubts emerge,” the professor says. “People learn that there is a vaccine only for the young, tomorrow they are told that it’s only for the elderly… that some countries are halting its use and others don’t.”

Last week, the EMA confirmed the link between blood clots and the jab (now renamed Vaxzevria), but stressed that “the benefits of the vaccine continue to outweigh the risks for people who receive it.” Statistics show that younger people have a higher chance of developing the clots, so some countries have started limiting Vaxzevria vaccination to certain groups.

Obviously, not everyone scheduled to receive the vaccine is prepared to believe that the “benefits outweigh the risks.” Moreover, the confusing guidance leads to the question: How old must one be to get the AstraZeneca jab safely? In France, the age cut-off is 55+, in Germany, it’s 60+, in Spain, it’s allowed for those aged 60-69. The UK is a bit out of the pattern, as it is advising that the vaccine in question not be given to people younger than 30.

Confused? You are not alone. In France, for example, a recent study showed that more than 70% of those polled do not trust the AstraZeneca vaccine. Looks like the concerns are spreading like the virus itself.

“France has a lot of vaccine-skeptic people,” Vincent Marechal, professor of virology at the French Sorbonne University, says. “People are not confident in the vaccines in general. The AstraZeneca story and blood clot cases make people even less confident. The problem is that we don’t know whether these vaccine-skeptic people may compromise the collective immunity that we are trying to reach. If we want to control the epidemic in France, we need to vaccinate almost 90% of the adult population… It’s a matter of rationality between the benefit and the risk.”

Across the border, in Spain, the authorities in the capital counted how many people rejected vaccination after the central government imposed age restrictions. Last Friday, only 45% of those scheduled to be vaccinated with AstraZeneca in Madrid confirmed their attendance. The capital’s deputy counselor of public health, Antonio Zapatero, who reported this data, was furious, while blaming the government for the “confusion.”

Plus, different EU authorities have come up with different approaches regarding those who received the first AstraZeneca dose and have now found themselves out of the eligible age group. France will offer them a second dose of an mRNA vaccine 12 weeks after the first. Germany’s top vaccination scientific committee advised doing the same. Spain, meanwhile, is still in doubt as to whether it should follow France’s example, or not administer the second shot at all, as the immune response after the first injection is considered to be 70% effective against the virus.

Whether the Spanish citizens affected would like any of these options, especially that last one, is anyone’s guess.

“All of this has been very rushed,” Dr. Malcolm Kendrick, who works for NHS in England, says. “It’s a problem we don’t have any good answers for. If you got a first AstraZeneca jab and didn’t have any problem, then you probably will not have a problem with the second jab, because it seems to be a very specific immune reaction.”

Prof. Valenzuela calls for fast tests to be done before any decision is made on the political level.

You may ask yourself: Amid all the uncertainty, why are thousands of people still getting the AstraZeneca vaccine? Are they not aware of the risk? Or maybe the risk itself is not as big as the media headlines make it out to be?

“The chances of suffering a blood clot are very small. If you are older, you have a much greater chance of dying from Covid. So the relative risk of developing a blood clot from the vaccine becomes a lesser problem,” Dr. Kendrick told RT. “But if you are younger, the risk of the side effect becomes closer. So, it’s about balancing risks from the benefits. It does become quite a complex argument for people to understand.”

Yes, from the point of view of the scientific community, nothing unusual has happened. “It’s normal that the problems emerge. The vaccines were developed very fast,” Prof. Valenzuela explains. Prof. Marechal also believes that the detailed report about the AstraZeneca vaccine-related blood clots, at the end of the day, will help researchers modulate and modify the inoculation process.

Prof. Valenzuela calls for patience amid all the fear-mongering and speculation. “Why do we normally need from five to 10 years to create a vaccine? Because, for example, something that may go well for a young person of 20-40 years, might go differently for someone who has an illness, or for a pregnant woman, or for an elderly person, or for a child. So, while you are developing a vaccine against one certain pathogen, you should take into account all these peculiarities. Plus, the virus mutations, as well as side effects. It takes time.”

Unfortunately, any long investigation process plays on the nerves of those scheduled to get the AstraZeneca shot, as they need to make a decision now.

And… it’s not only about AstraZeneca. The Johnson & Johnson vaccine – already the second of four approved by the EU – recently emerged in the headlines along with the words ‘blood clot’. On April 9, the EMA announced its safety committee had started to review reports about “thromboembolic events” caused by the company’s shot. Four people developed blood clots after being vaccinated, and one of them died, the agency said.

Yet another fact that might scare the average citizen. Plus, following the logic of the medical experts, we might expect more such side-effect-related reports to come, as more vaccines are approved and more people are inoculated.

“All the scientific exploration we are doing now… it is war. We all are at war,” Prof. Valenzuela says.

“You can tell people, please, get vaccinated to prevent the circulation of the virus, because you may infect other people, including those who cannot be vaccinated,” Prof. Marechal continues. “But the risk is individual, and this is the main problem.”

You tell people, OK, the risk of thrombosis is linked to the vaccination, so you are alone facing the case of thrombosis, but we ask you to get vaccinated to protect other people.

“This is something very well understood by the older people, because they are at greater risk of getting Covid,” he says. “But it’s difficult for the young to understand, because when you are 20, you are really not preoccupied by Covid globally.”

Can anything help against the fears? Less confusing data and more unity in facing the virus certainly wouldn’t hurt, Prof. Valenzuela believes.

“Politicians, together with the scientists, should explain to people that we are in phase 4 of clinical trials. Phase 3 has given us certain data, especially about safety and level of immune response, but it all has been done very fast.”

Confusion is playing on the enemy’s side, and people become scared when they don’t understand what’s going on. “There should be a scientific body that processes the information and shares it with the public. Otherwise, if we don’t explain to people how the work progresses, they won’t understand the efforts,” Prof. Valenzuela said.

This is not the case in his own country and its regional neighbors right now. “The problem is that Europe is not acting as a common voice. Some countries have their own scientific communities that are declaring their own conclusions, their neighbors are looking at them and following their example. There is no joint effort… The EU chose to have a common strategy regarding the vaccine purchase, but when challenges like side effects emerged, members started to act differently.”

Prof. Marechal insists that inoculation is one of the main weapons against the spread of the virus, so it shouldn’t be compromised. “So far, people need to be vaccinated, it’s something urgent for many reasons. The virus is killing people, and the rate of fatality is much higher than the rate of fatality linked to the vaccination,” Prof. Marechal says. “We need to block the virus circulation and prevent the variants from emerging.”

And during this fight, science should prevail over politics, Prof. Valenzuela added.

“We want to activate global economy, trade and tourism, and if the countries don’t have equal levels of immunization, the virus will spread and generate new variants that would challenge the efficacy of the vaccines, so in the end we will be back to square one,” he concludes. “The bigger the cooperation is, the bigger the success will be. We need a scientific response, one the politicians should support.”