Home / WORLD / Why say ‘riot’ when you can be vague and sensitive instead, AP Stylebook urges in newest Orwellian guidelines 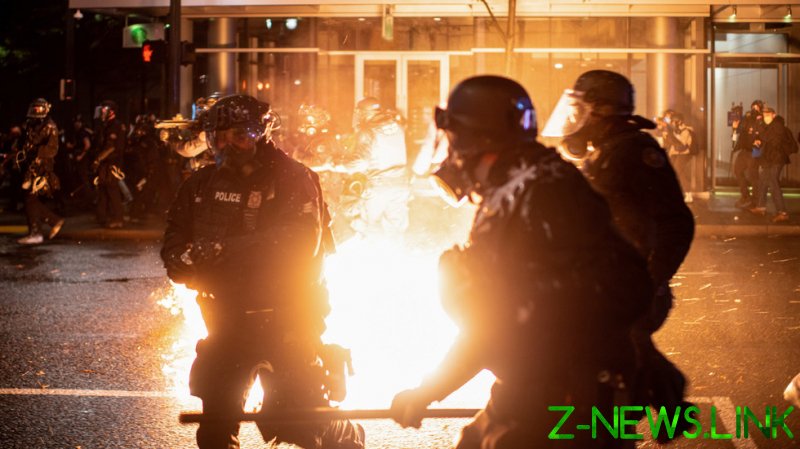 While acknowledging the dictionary definition of riot as a “wild or violent disturbance of the peace,” AP said the word somehow “suggests uncontrolled chaos and pandemonium.”

Worse yet, “Focusing on rioting and property destruction rather than underlying grievance has been used in the past to stigmatize broad swaths of people protesting against lynching, police brutality or for racial justice…” the Stylebook account tweeted on Wednesday.

The claim that something has been used in the past in a racist way has already led to banishing many English terms to the Orwellian “memory hole.” It certainly appears the AP is trying to do the same with “riot” now.

Instead of promoting precision, the Stylebook is urging reporters to use euphemisms such as “protest” or “demonstration.” It advises “revolt” and “uprising” if the violence is directed “against powerful groups or governing systems,” in an alarming shift in focus from what is being done towards who is doing it to whom.

There is even a helpful suggestion to use “unrest” because it’s “a vaguer, milder and less emotional term for a condition of angry discontent and protest verging on revolt.”

Translated to plain English, this means a lot more mentions of “unrest” and almost no references to “riot,” in media coverage going forward, regardless of how much actual rioting is happening.

Mainstream media across the US have already gone out of their way to avoid labeling what has unfolded since the death of George Floyd in May as “riots.” Though protests in Minneapolis, Minnesota turned violent within 48 hours, before spreading to other cities across the US – and even internationally – the media continued calling them “peaceful” and “protests for racial justice.”

Yet in just the first two weeks of the riots, 20 people have been killed and the property damage has exceeded $2 billion, according to insurance estimates – the highest in US history.

AP is no stranger to changing the language to better comport to ‘proper’ political sensitivities. At the height of the riots in June, the Stylebook decided to capitalize“Black” and “Indigenous” in a “racial, ethnic or cultural sense.”

A month later, the expected decision to leave “white” in lowercase was justified by saying that “White people in general have much less shared history and culture, and don’t have the experience of being discriminated against because of skin color.”

The Associated Press Stylebook and Briefing on Media Law, as its full name goes, has effectively dictated the tone of English-language outlets around the world since it first appeared in 1953. It is also required reference material in journalism schools.

So when it embraces vagueness over precision and worrying about “suggestions” and “subtly conveying” things over plain meaning, that rings especially Orwellian – in both the ‘1984’ sense of censoring speech and thought and regarding the corruption of language the author lamented in his famous 1946 essay ‘Politics and the English language.’

AP is hardly the Ministry of Truth, dictating Newspeak under the penalty of torture. As it turns out, it doesn’t have to be. A bit of updated style – and thought – guidance announced on Twitter from time to time will do.