Home / WORLD / Why must Americans rely on foreign media to expose the deplorable conditions of Biden’s child migrant detention centers?

Why must Americans rely on foreign media to expose the deplorable conditions of Biden’s child migrant detention centers? 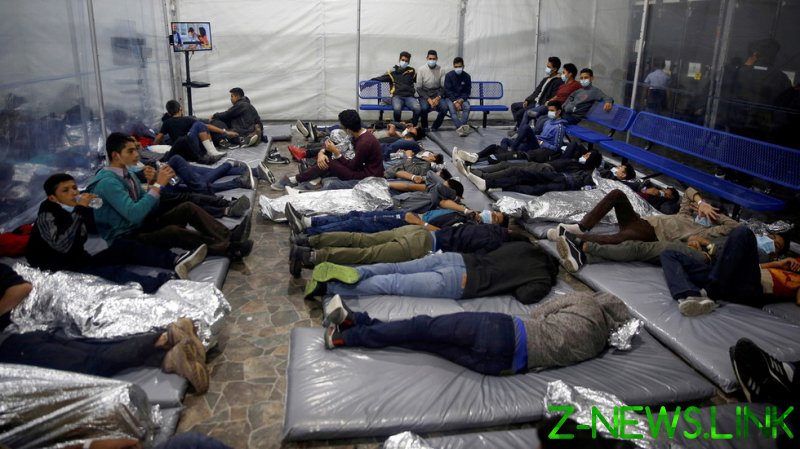 In order to appreciate how biased the American mainstream media is in favor of the Democratic Party, consider that it took journalists from the BBC (hardly a pro-Trump organization) to uncover the appalling conditions that await the hundreds of child migrants entering the United States from Mexico every single day.

This massive influx of minors, who mostly arrive from Central America, has forced the Customs and Border Protection agency (CBP) to place the minors on daily flights to a network of 200 detention facilities across 22 states, where the young arrivals can expect to be greeted by “cold temperatures, sickness, neglect, lice and filth,” among other such pleasantries, the British broadcaster revealed in its shocking report.

To better understand the severity of the situation, which the Biden administration has been at great pains to not call a “crisis” even after Biden himself branded it one, in March and April alone more than 36,000 children crossed into the US from Mexico unaccompanied by an adult. At the same time, encounters between the US Customs and Border Protection (CBP) and illegal migrants of all ages exploded to 178,622 cases in April, up from 72,111 in November 2020.

Since journalists are prohibited from speaking with the child detainees, the BBC arranged to meet with some of them after they had been released from the facilities to better understand how they were treated. At risk of giving away the plot, ‘abysmally’ would probably best describe it.

One of the interviewees, Cindy, a girl of 16, described the conditions at the Donna detention site, situated on the Texas-Mexican border, where she shared a plastic-encased cubicle with 80 other young females, many of whom were always “wet under their blankets” due to poor plumbing.

“We all woke up wet,” she said, as quoted by the BBC. “We slept on our sides, all hugged, so we stayed warm.”

Eventually, Cindy tested positive for Covid-19, a relatively common occurrence among new arrivals. Since last year, the US Health and Human Services (HHS) have reported more than 3,000 coronavirus cases among migrant youth in Texas alone. Meanwhile, the total number of Covid cases in the new detention sites around the country remains largely unknown – a startling revelation especially given how loudly the Biden administration has been trumpeting about “containing the pandemic.”

Without being informed where she was going, Cindy was flown with 40 other Covid-positive children 2,400km (1,500 miles) away to a new detention site – a convention center with the capacity for almost 1,500 – located in San Diego, California. She said the interior of the new facility, although better than at Donna, consisted of “row after row of flimsy camp beds.”

At another emergency detainee site, at the Kay Bailey Hutchinson conference center in Dallas, Texas, a facility for teenage boys aged 13-to-17, the BBC arranged interviews with employees who agreed to speak on condition of anonymity.

“Boys have been in there for 45 days straight with no sunlight, no recreation outside, no fresh air, no nothing,” one staff member revealed. “They are all depressed. I heard the other day that several were contemplating suicide because of the conditions here.”

In light of these and many other disturbing findings by the British broadcaster, the question bears repeating: why has the ‘legacy media’ in the United States not only ignored the plight of these migrant children, but continues to blame everything on the failings of the last administration?

In the very same week that the BBC report was published, CNN ran with a story that questioned Trump’s handling of the border crisis between July 2017 and July 2018. How’s that for brave journalism? In other words, let’s just ignore how the current Biden administration has not only exacerbated the migrant situation by dropping the moat with Mexico, but is now treating tens of thousands of children arriving every day to the US mainland. It leaves one wondering how much mileage the ‘Orange Man Bad’ shtick will buy the media and the Biden administration before the American people finally wake up.

While Trump’s handling of the border crisis did leave much to be desired, at least it could be said that the Republican leader was realistic about America’s ability to relieve the plight of the world’s needy. When Biden came to power, he immediately halted construction of Trump’s signature border wall, substituting in its place what amounts to an invitation for all and sundry to enter the United States. And smack in the death grip of a pandemic, no less.

In his executive order on migration and asylum, which gave the green light to millions of desperate foreigners south of the Rio Grande, Biden (or somebody) wrote, “Securing our borders does not require us to ignore the humanity of those who seek to cross them.”

If ever there was one sentence that could lay waste to an entire nation, and arguably the most powerful nation on Earth, this was it. After all, a simple look at the deplorable condition of Democrat-run cities and states across the country, shows them to be increasingly indistinguishable from the grim realities of lawlessness and gang violence plaguing parts of Central America. This disproves the dream that America can forever play savior to the world’s “huddled masses.”

Moreover, by sending the message that the United States would welcome illegal migrants with open arms, Biden placed thousands of people – many of whom swarmed to the US border on foot – at grave risk from various predators, including human traffickers, bandits and rapists. In fact, exactly how many desperate people were ultimately victimized thanks to Biden’s virtue signaling will never be known, but the number must certainly be astonishing.

At the same time, the Democratic Party, consumed with the illusion that it is the ultimate defender of human rights, has placed millions of Americans at grave risk by opening the border as though the world has never heard of terrorists, drug traffickers and Covid-carriers. How in the world can the Biden administration, not to mention the mainstream media, ever think to chastise the past administration for its “racist” border wall when the Biden administration has, by its politically motivated arrogance, single handedly made America a much more dangerous place overnight?

Finally, on the question of America’s severely co-opted media organizations covering the calamity, US journalists didn’t ‘drop the ball’ on the migrant story. The fact is they never had the ball to begin with simply because they understood they should not go anywhere near it.

Any criticism that falls on Biden naturally becomes a point for Team Trump, and that is the very last thing the media, considering its myriad Democratic allegiances and alliances, wishes to do. Thus, until the US media is able to perform its duties impartially and without prejudice for one political party, millions of people both inside and outside of the United States can expect to suffer the consequences.

Unless, of course, Americans would rather rely on a foreign news agency to inform them about the stark realities of their curious democracy.