Home / Society / Why Khabarovsk will be the beginning of the end

Why Khabarovsk will be the beginning of the end

In Russia, public protests often mean not that they are credited with 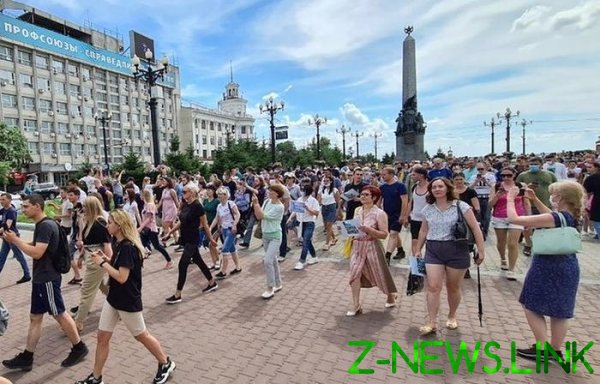 Two days of meetings in Khabarovsk, which occurred at the weekend, has turned into a major political event, forcing to forget the fate of the arrested Governor of the region Sergey Furgala. The fact that the streets of the regional center came out almost 30 thousand people with protest slogans shook the imagination of many sofa experts, revived the hopes of the extra-parliamentary opposition that “people are waking up”.

But as far as what is happening in the far East, is the measure of surprise of some and the expectations of others? There is no exaggeration and the first and second? And how much can be serious consequences?

Refer to the events of recent years in the far East. In September 2018 the candidate of the party in power Andrey Tarasenko failed to win the gubernatorial election in the neighboring Primorsky region, which turned into a scandal and the results of which had to be cancelled. Then, too, followed the meetings, included representatives of the opposition and non-parliamentary Communist party from Moscow. And than all ended? The Kremlin instead of a failed Governor appointee sends another appointee — Oleg Kozhemyako. Re-election in December has already carried out with the minimization of all risks of Andrei Ishchenko, candidate of the Communist party, which almost won in September, they are not allowed.

And the election campaign goes as smoothly as possible: Kozhemyako got 62%. No protests against imposed from Moscow candidate against dishonest non-admission to elections and other things. It turned out that a seething volcano is very easy to calm a paltry SOP, in this case, cancellation of voting results and sending the good gentleman is evil. All — Primor, at least for two years, disappeared with protest cards.

Why, in the case of Khabarovsk should expect different results? Yes, in the far East dissatisfaction with the policy of the center is long-established element of regional consciousness. This contributes to a number of reasons. However, if there’s a glimpse of some of the alternatives, the image of the desired future, relatively speaking, in view of the far Eastern Republic? Or maybe, people see an alternative to the current political regime in the country? Is it worth taking spontaneously splashed irritation of the population for which long-term trends?

Yes, the arrest of the Governor, as it turned out, popular, has provoked demonstrations and marches, and to call them fully “natural” will probably be wrong. Timely and posters, organizing rallies would have been impossible without the initiative group, which was formed assistants Furgala. 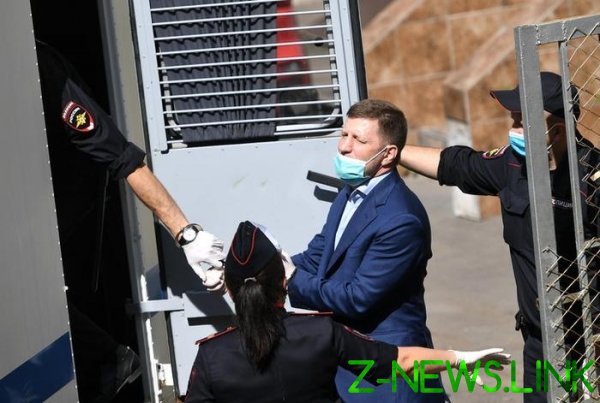 I think the supporters and staff of the arrested head of the region did not expect such a resonance. The least he needed was the liberal democratic party and Zhirinovsky. Former officials of the regional administration, had triggered the processions today are themselves calling for restraint. The liberal democratic party was quick to deny demonstrators in Khabarovsk. But it was the public reaction was “spontaneous”, showing the degree of irritation of the people. But, again, the irritation is situational, unconditioned reflex on the arrest of the Governor, the possibility of a relatively safe to show a Fig of power, which is not doing what it should be, and pays little attention to its edge. No more.

Will select now Moscow is a new candidate like Kozhemyako, strong and knowledgeable, and that will continue the protests? People will go on strike, to hold a meeting? Of course not. It appears that the new acting — who wouldn’t be appointed to this position will receive about the same 62% at the next election.

History of Russia since 1999, knew many of the regional conflicts, it is enough to recall and seizure authority in Cherkessk in 2004, saw the election of opposition mayors in 2012-2013 and in Yaroslavl, and Petrozavodsk, and Yekaterinburg. And how does it affect the political stability of the government? No way. After some time, the opposition was either in prison, or they could be squeezed one way or another from their chairs, and no one to protect them does not become. The same Furgal first hastened to assure the Kremlin of their loyalty, and as shows became publicly known his conversation with the envoy Yury Trutnev was only on “rating the President”.

The conclusion may be one — do not take local protests for the comprehensive trend. So they were, you need not just the discontent and anger of people, but their belief in the possibility of achieving their goals, and these goals should not be limited to the replacement of a bad master for a good, faith in the safety of protesters and the lack of them negative consequences and the belief that the power of the weak and the resist will not. None of these factors in today’s Russia is not observed. So, I think, the event in Khabarovsk will soon disappear from the news agenda.