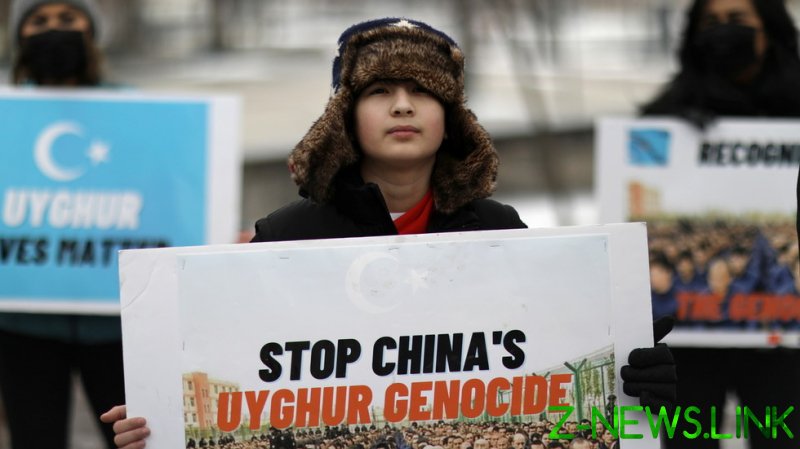 In his last day in office, former US Secretary of State Mike Pompeo affirmed that the Uighurs’ situation in China’s Xinjiang autonomous region amounted to “genocide”– one of the gravest crimes in international law, forever haunting the world through the legacy of Nazism. Unsurprisingly, the designation, which constitutes the crime of deliberately intending to destroy a people or ethnicity altogether, dramatically increased tensions between the US and China. Furthermore, it succeeded in boxing in the succeeding Biden administration, which didn’t deviate from the narrative.

But now that we have arrived in October, Xinjiang has all but disappeared from the international political agenda, a puzzling state of affairs if the situation there is as severe as it is claimed to be. The Biden administration has said remarkably little about it of late and, although the media still bring it up from time to time, the relentless coverage accusing Beijing has eased off, as has the procession of new ‘studies’ pressing the genocide claim, which were also given plenty of coverage.

Instead, an unusual article appeared in the Associated Press on Wednesday. While still accusing China of human-rights abuses in the region, it proceeded to significantly backtrack and tone down the state of affairs, leading with the headline: “Terror and tourism: Xinjiang eases its grip, but fear remains” and setting out that China itself has scaled down the situation and that Uighurs are back on the streets.

The key takeaway? The outlet has completely changed its narrative. In June it provided a platform for so-called experts to directly state China was pursuing genocide, but it has now changed course and is framing the situation in Xinjiang as being in the past – a de-escalation if ever there was one. One of those who had been quoted, anti-Communist scholar Adrian Zenz, was peddled by the media on an industrial scale throughout 2019 and 2020 as the ‘go to’ expert on the matter, but has now not featured in a mainstream publication for months.

Those who have been campaigning about Xinjiang reacted in horror at the latest AP piece on Twitter and scrambled to defend their positions. But it’s a sign of the times. The English-language mainstream media has always followed the US government’s narrative, and there is a growing body of evidence to demonstrate that Biden – having used Xinjiang for America’s own gain regarding solar panels – has now made the decision to consolidate his own foreign-policy strategy and move away from these allegations, which were primarily weaponized by the Trump presidency as part of its bid to contain China. The western public fell for it, and the fact the accusations are now being played down is an illustration of how much in truly bad-faith they were proferred.

The US government weaponizes human rights as part of its political agenda. It is blasphemy for mainstream commenters to say this, but it is the truth. Using a process which Noam Chomsky describes as “manufacturing consent,” the US employs a network of organizations and scholars to create research and talking points, and to beef up dissenting groups of interest, before laundering them through the media to buy public support for its foreign policies.

Once the intended goals have been achieved, it then subsequently drops the coverage and moves public opinion on. In 2017, as President Trump pursued“maximum pressure,” Kim Jong-un was portrayed as an evil murdering tyrant, until Trump started having summits with him. Suddenly the scores of North Korean defectors, who’d been promoted by the president at his own events, vanished.

Similarly, as part of resetting the agenda on China, the Trump administration weaponized events in Xinjiang to push a narrative that the Chinese were akin to the Nazis. This served several purposes. First of all, it was used in 2019 as part of laying out the US campaign against Chinese tech companies such as Huawei and Hikvision by implicating them in ‘human rights abuses’ and justifying their placement on the US commerce department’s entity list. Secondly, it was utilized to force allies to come into line by using the moralistic issue of human rights. And, thirdly, it was used by Biden early on as he focused on the issue of “forced labor” in order to legitimize his protectionist agenda concerning solar panels.

But after all that, Biden has – at least for the time being –  changed course. Xinjiang disappeared at the same time as the Afghanistan debacle unfolded, which was when Biden gained a political window to begin rolling out his agenda. After this, he pivoted to re-emphasize the Indo-Pacific as his primary region of focus by announcing the AUKUS deal and placing Taiwan firmly in his sights. In doing so, he has also quietly discarded other aspects of the most extreme Trumpian initiatives against China, including the Wuhan lab-leak conspiracy theory, and has geared up for trade talks under the guise of ‘being tough’ on Beijing.

Biden has upped the competition with China and his agenda is not amicable, but it has narrowed its focus. He has endorsed Trump’s policy, but made his own goals, priorities and red lines. And part of this involves quietly playing down the accusation Beijing is committing genocide. Based on this premise, it seems highly unlikely that any boycott of next year’s Winter Olympics in Beijing will take place either, as the campaign to build support for it would already be well underway by now – but those advocating it have also been given the cold shoulder by the media.

Of course, critics of China’s actions in Xinjiang are not espousing a work of fiction. They are not liars. Beijing has indeed ramped up state surveillance and pursued mandatory re-education in the area in an attempt to integrate the Uighur minority, after years of racial and political tensions. However, it is also true that the campaign to brand this a ‘genocide’ has been geopolitically weaponized and ramped up to generate emotionally charged hysteria.

And the anti-China side of the argument has problems coming to terms with this. Just like many human rights organizations and causes in the past, they have found themselves caught out by a US that uses them, builds them up, then dismisses them when necessary.

Biden may bring the Xinjiang narrative back if he finds it politically convenient to do so, or if he needs to. He has not discarded Pompeo’s opportunistic designation, but has shelved it. It’s as if Xinjiang has been taken and placed in a box, ready to be brought out as and when necessary. In a nutshell, this has been a lesson in learning the disingenuous nature of US foreign policy, where a few short months ago the biggest human rights abuse since the Nazis was taking place, and now it is being subtly dismissed.

Ultimately, this does not do any justice to the gravity of genocide at all. Such labels should never, ever be thrown around in such bad-faith.