Home / WORLD / ‘Why didn’t you kill it?’: Robot dancing with Missouri cheerleaders creeps out Americans

‘Why didn’t you kill it?’: Robot dancing with Missouri cheerleaders creeps out Americans 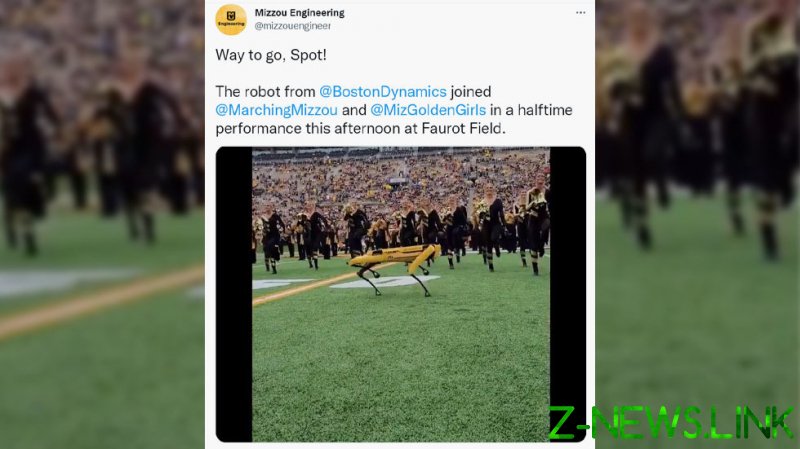 In a video of the performance, Spot – a $75,000 robot that can traverse gravel, grass, and stairs, and carry up to 30lb (14kg) of equipment – could be seen shaking its rear and doing a Michael Jackson-esque moonwalk as cheerleaders with pom-poms performed in the background at the University of Missouri.

Though the performance received hundreds of likes, with some social media users calling the robot “cute,” others were less enthusiastic about the “creepy” hound.

“This walks a very fine line between comical and deeply unsettling…” tweeted one person, while another user opined, “Send it back to Boston.”

ESPN senior writer Ryan McGee described the performance as “amazing,” but added, “Have you people never seen a Terminator movie?!”

It wasn’t the first time Spot had been recorded performing dance moves – similar videos of dancing Boston Dynamics robots have excited and terrified the public in equal measure. An entire troupe of robots danced to BTS’ song ‘IONIQ: I’m On It’ in June to celebrate Hyundai’s acquisition of the company, eliciting the full range of responses.

Fears over the future of such advanced robots are not unmerited. In April, Spot was seen aiding French trainee soldiers in a military drill, while similar robot dogs are now being used by the New York Police Department and the US Air Force to assist in armed responses and to patrol areas.

Other more humanoid Boston Dynamics robots are able to perform parkour and backflips.