Home / WORLD / Why did it take an old story about horrific dog experiments to convince people that it’s time to #ArrestFauci?

Why did it take an old story about horrific dog experiments to convince people that it’s time to #ArrestFauci? 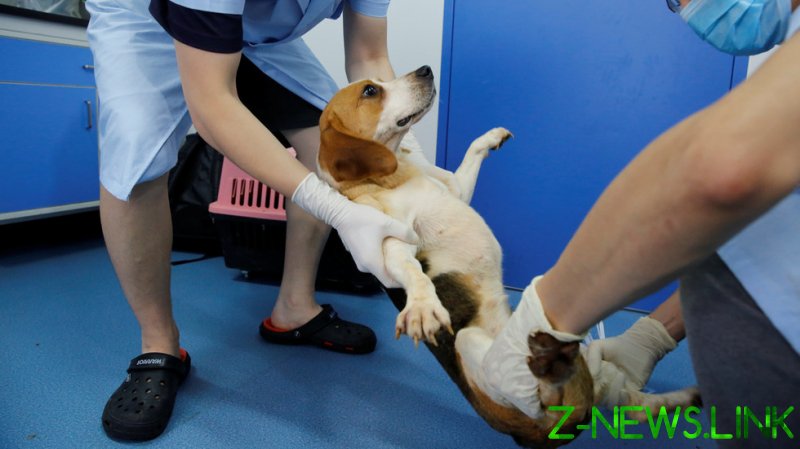 Images of a sad pair of beagle puppies, their heads encased in square cages as they lie hopelessly on a table, have yanked at America’s heartstrings since they were shoved back into the national spotlight by White Coat Waste Project, a group that calls out US government labs for animal cruelty and other misuse (and abuse) of citizens’ money.

Millions of taxpayer dollars were used to essentially torture the puppies to death in labs in and out of the US, according to the organization, which unearthed evidence of the cruelty in the form of over $21 million spent on a total of four experiments – none of which was medically necessary. One involved severing 44 puppies’ vocal cords so that their pained barking and whining wouldn’t bother the scientists; another deliberately infected them with sand flies over the course of 22 months, restricting their movements by locking their heads in boxes so that they could not even swat the insects away as they were being eaten alive.

It’s horrific stuff by any measure, beyond cartoonish levels of evil. Indeed, even Texas Senator Ted Cruz (R) claimed he thought the tweets he’d read about Fauci “literally ‘torturing puppies’” had to be “metaphorical.”

But while the outrage is justified, it’s also old news. One could ask why the masses have turned against Fauci only now, when his National Institute for Allergies and Infectious Diseases has been funding the torture of puppies for years, with one of the horrific experiments dating from 2016. The most recent grant dated from 2020, meaning Fauci’s agency was vivisecting helpless furry animals at the University of Georgia even while he was being worshiped as America’s Doctor™ and posing for photos with other people’s dogs.

Even White Coat Waste Project refers to its own revelations as “Fauci’s other international scandal,” implying knowledge of a better-known episode in the fame-hungry doctor’s life.

One must ask why the popular outrage against Fauci over animal cruelty is not matched by an equal (if not more forceful) outrage over the doctor’s crimes against humanity. From his enthusiastic support of gain-of-function studies to his efforts to sideline a cheap, effective drug that could have saved thousands of lives during the AIDS epidemic in favor of a highly toxic alternative, Fauci’s hands are covered in the blood of humans as well as that of canines.

Indeed, Fauci’s behavior during the Covid-19 outbreak – trashing cheap but effective treatments in favor of expensive alternatives lacking proof of efficacy – eerily mirrors his actions during the early years of AIDS. Thousands of people have died in both cases after Fauci pushed deadly or ineffective medications – most notably the failed cancer drug AZT in the 1980s and the failed Ebola drug remdesivir in the last two years – while safer and more efficacious remedies sat on the shelf.

Indeed, the high-priced antiviral remdesivir, which has been pushed for Covid-19 despite no clinical proof it saves lives, has instead been associated with multiple organ failure in several studies.

Discoveries that members of the National Institutes of Health, parent of Fauci’s NIAID, had hefty investments in Gilead, maker of remdesivir, as well as in Moderna, one of the manufacturers of an mRNA vaccine for Covid-19, have only raised more questions about Fauci’s motives during the coronavirus pandemic.

Fauci has also been caught lying repeatedly about his involvement in gain-of-function research aimed at making bat coronaviruses more infectious in humans. Despite his profuse denials of even funding such research in recent months, he previously defended the work by arguing that any knowledge gained from bolstering the infectious potential of such pathogens was “worth the risk” of unleashing a pandemic. Whether or not his NIAID-funded research played a part in the Covid-19 outbreak has not been proven, but Fauci’s furious tap-dancing around any questions regarding the Wuhan lab or gain-of-function research in general does him no favors.

Yet, somehow, none of this elicits anything like the howls of rage coming from dog-lovers on social media. The same outrage-on-demand contingent who demand countries like China and Vietnam stop eating dog meat, signing a petition with one hand while biting into a well-done burger with the other, insist on the closure of “barbaric” wet markets like the one we were told spawned the novel coronavirus in late 2019. This group’s problem is less animal cruelty than being reminded of that cruelty. They’d rather wait until their meat is shrink-wrapped and frozen in a supermarket than pick out the tastiest-looking chicken in the bunch and have it slaughtered then and there.

Ultimately, Fauci being arrested is an endpoint that animal rights activists, human rights activists, and the normally comatose members of Congress – 24 of whom actually signed a letter demanding answers from the once-untouchable Coronavirus Pope – should see eye-to-eye on. But the diminutive doctor must not be permitted to skate on his real crimes – whether it’s pandemic profiteering, bankrolling gain-of-function research in China that was at the time illegal to perform in the US, or allegedly perjuring himself in congressional testimony. Fauci has much to answer for. Dozens of dead puppies are just the tip of the iceberg.

Unfortunately, like other gleeful architects of the Covid-19 police state who’ve been caught in the midst of scandal – former New York Governor Andrew Cuomo, for example – arresting Fauci on the basis of popular rage over dead puppies is likely to close the book on further prosecution, no matter how heinous his “real” crimes.

Just as Cuomo is unlikely to ever be held to account for the thousands of elderly New Yorkers who died because of his nursing-home order to house Covid-positive patients with the helpless elderly, Fauci will be permitted to enjoy his retirement – and big fat pension – in peace. Americans who have lost everything to his mismanagement of the Covid-19 pandemic must not let that happen.