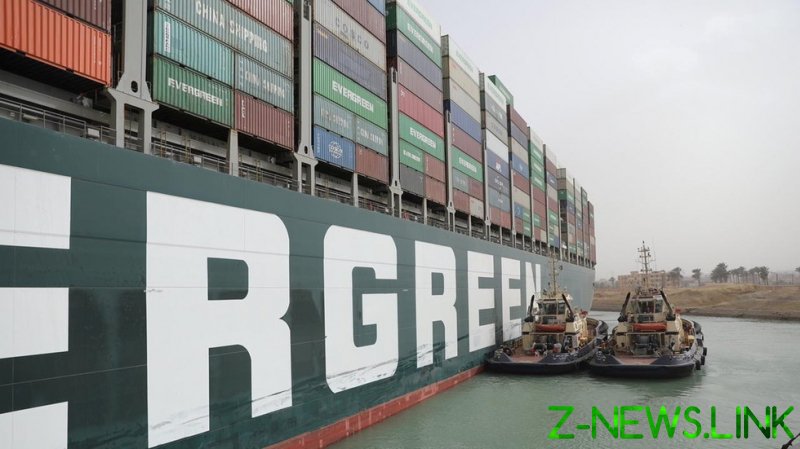 According to commodities analyst Kpler, which tracks bulk goods vessels, at least seven tankers bearing 6.3 million barrels of crude oil have been delayed because of the accident. Using the Brent Crude oil price of about $64 a barrel as a value proxy, the seven vessels carry about $403 million worth of crude oil, it said. If the ship ‘Ever Given’ remains stuck at the weekend, three more vessels carrying 2.5 million barrels of oil, worth about another $160 million, will join the queue from the south, Kpler said.

Experts say that the price of the commodities, which shot up by about 6% on Wednesday, could rise further as a result of the blockage. “Just when bullish traders thought that the price party was over, they got an unexpected gift, as the Suez Canal blockage is temporarily disrupting usual tanker traffic and the respective expected oil and LNG deliveries,” Bjornar Tonhaugen, head of oil markets at Rystad, told the South China Morning Post (SCMP).

“The grounded ship, due to its massive size, is creating some distortion in the flows of crude and products that are transported through the canal, and such ‘speed-bumps’ are having a rollover effect on oil prices, as the product will not reach its buyers as quickly as expected,” he added.

According to Jett McCandless, CEO of supply chain and logistics service provider project44, “It’s another big blow to global trade in an already backlogged and battered supply chain year.” He said, as quoted by the SCMP, “The vessel has single-handedly put a stop-block in both directions to that vital trade route between Asia and Europe. If they can’t dislodge it with tugs at high tide, they will have to start removing containers to lighten the load and refloat her.”

McCandless noted that, “if the blockage lasts for more than a few days, it could impact prices.” Project44 is currently tracking 34 other container vessels, carrying about 380,000 containers of non-bulk goods, that are either already stuck in the canal or approaching it.

Meanwhile, the firm working to dislodge the container ship warned on Thursday that “it might take weeks” to free the tanker, comparing it to trying to remove “an enormous beached whale.”

The Suez Canal is one of the busiest trade routes in the world, and connects Europe, Asia, and Africa. An average of 50 vessels travel through it daily, carrying about three million tons of cargo, mainly bulk goods such as LNG, oil, and containers. Each year, nearly 20,000 vessels travel through the 200km artificial waterway, accounting for about 12% of world trade by volume. Close to three million barrels of crude per day, an estimated 10% of total seaborne oil trade, pass through the canal on a daily basis.