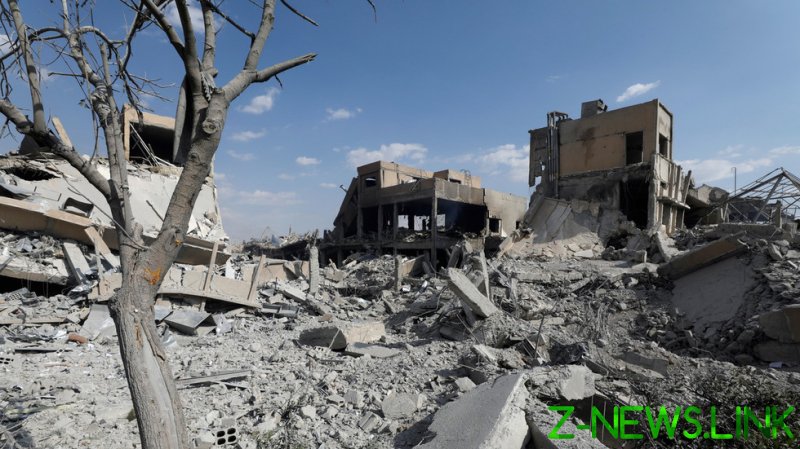 Just days before Biden’s inauguration, there were conflictingreports of US military build-up in oil-rich northeast Syria. Whatever happened in the run-up to the change of power in Washington, it is a fact that this area was already occupied and plundered by US Coalition forces and their Kurdish separatist proxies. Some reports indicated the arrival of convoys of trucks carrying weapons, military hardware, and equipment into the region. Back in September, the “US Central Command (Centcom) deployed Sentinel radar, increased the frequency of US fighter patrols over US forces and deployed Bradley Fighting Vehicles to augment US forces,” according to spokesman Captain Bill Urban.

The ISIS revival should come as no surprise to analysts of the Syrian conflict. In December 2018, Donald Trump made the unexpected announcement that he would withdraw US troops from Syria. One month later, ISIS carried out a suicide attack on Manbij, in northeast Aleppo, killing four American operatives and wounding three. This enabled the war hawks in Trump’s administration to impede plans for an exit from Syria.

The Biden administration is a throwback to the Obama/Clinton era of globalism. Those who celebrated Biden’s victory over Trump have heralded a new era of “war on terror” that will be waged against all those who challenge establishment narratives. The American “left” has effectively sanctioned a new wave of neoconservative military and multi-spectrum dominance campaigns that will be devastating for Syria and the region unless it is halted before it gets started.

Joe Biden is no stranger to unlawful US military intervention. He had been strongly in favour of war against Iraq in 2002, based on the “weapons of mass destruction” canard. Biden sold the war as a “march to peace and security”. It clearly did not signify peace and security to the millions of Iraqis starved, mutilated, murdered and disenfranchised by Bush’s campaign of “shock and awe”that followed. Biden’s role was pivotal to Bush’s securing Senate support for going to war.

It was Biden who let slip, in 2014, that the Gulf States, Turkey and Jordan were arming and funding terrorist organisations invading, occupying and destroying Syria, but he omitted the fact that this would have, no doubt, been sanctioned by the US. Biden was vice president to Obama when the CIA’s Timber Sycamore programme began to funnel weapons and billions of dollars of aid to Al-Qaeda and ISIS-linked“moderates” in Syria.

The recent spate of ISIS operations are fortuitously timed, to put it diplomatically, if one’s aim is to facilitate increased aggression against Syria and a doubling-down of US military presence in neighbouring Iraq. We should not forget that the US has been allegedly implicated in support for the terrorist group, and ISIS operations should always be viewed in lock-step with US predator foreign policy in the region.

It has been claimed that the US has long been transporting ISIS fighters across the border into Iraq, where they are being refreshed and equipped before percolating back into Syria as a “super-ISIS” in a bid to sustain the perpetual destabilisation of Syria.

We know that Biden has the full support of aligned mockingbird media in the West and the control of the most influential social media platforms, Twitter and Facebook, to garner public support for his militarist policies. Trump was the economic sledgehammer, tasked to reduce Syria to a failed state economically, deprived of resources, driven into food insecurity by attacks on agriculture and food supply infrastructure. Biden is the war machine the neoconservatives have been patiently waiting for.

Biden has picked William Burns as CIA director. In Burns’s book ‘The Back Channel: A Memoir of American Diplomacy and the Case for its Renewal’, he advocates the use of soft power and the hitching of statecraft to the wagon of covert paramilitary operations and intelligence-gathering. Burns is described as a career diplomat who believes diplomacy and espionage are two sides of the same coin. Burns is an old-school American diplomat with close ties to Hillary Clinton.

Burns endorsed US intervention in Libya, he regrets not overthrowing President Assad and not sanctioning direct US military intervention on a greater scale. In a 2019 interview at the Truman Centre conference on US global leadership, he claimed a “maximalist” approach towards Syria would have been more effective and that it was a mistake not to enforce Obama’s “red line” over the alleged use of “chemical weapons”. It was an opportunity missed, according to Burns, when the US did not capitalise on “Assad losing altitude” and territory in 2012. He argued that military support should have been increased to the “moderates” at that point.

Despite his previous reticence over intervention in Iraq, Burns is not an intelligence head who will argue diplomacy over militarism – he has an axe to grind against the Syrian government. Global peace and security is dependent entirely on US supremacy. This is a CIA director who will uphold Biden’s promise that “America is back and ready to lead the world”. The reality is that Hillary Clinton is back and she will pick up where Obama left off before the Trump interlude, with potentially devastating consequences for Syria. 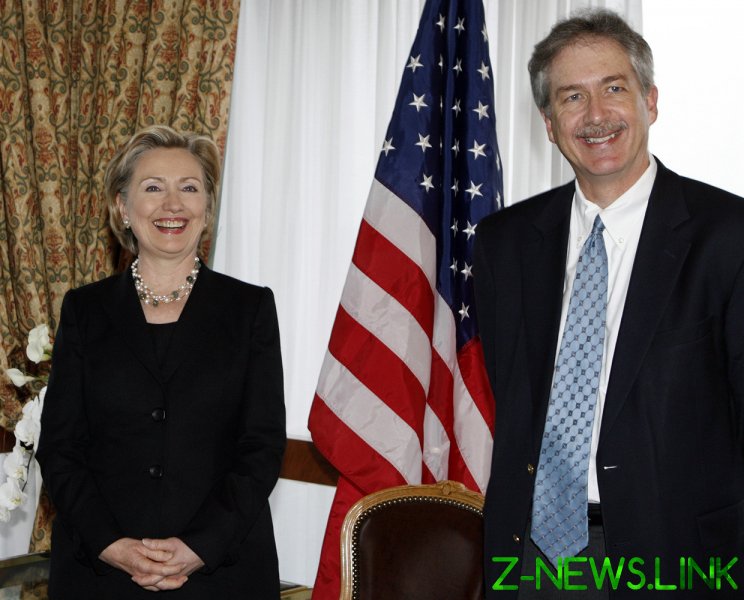 Samantha Power, the former US Representative at the UN during the Obama administration, has been appointed as head of the CIA outreach agency the US Agency for International Development (USAID). A budget of over $ 27 billion makes USAID one of the most powerful ‘aid’ agencies in the world today. It “accounts for more than half of all US foreign assistance”.

Power was one of the most vehemently anti-Syria government voices during Obama’s presidency. She was a UN ambassador who propelled the Syria ‘chemical weapon’ narratives into the media stratosphere with emotionally charged accusations supported by testimony from UK/US intelligence-linked White Helmet operatives and armed-group-linked medics with clear connections to the externally well-managed ‘opposition’ complex.

Biden has also given Power a seat on the National Security Council, which positions her close to National Security Advisor Jake Sullivan and in close proximity to CIA Director Burns. This forms a deadly alliance in favour of direct aggression against Syria and the toppling of a Syrian government already under pressure from Trump’s economic policies and a Covid outbreak that has closed borders and effectively blockaded the country, with international ‘aid’ pouring in exclusively the terrorist-held enclave of Idlib.

A recent National Security Directive on US global leadership in connection with the Covid-19 crisis was a clear opportunity for Washington to review the savage sanctions imposed on Syria by previous administrations. Peter Ford, the UK ambassador to Syria between 2003 and 2006, had this to say about the directive:

“With Samantha Power heading USAID … I fear it will be a battle to break down the inevitable resistance to doing anything that would help ‘government-controlled areas’. In the end, all that may result, and indeed all that may be intended, is an easing of sanctions as experienced by the areas not controlled by the government.

“NGOs from the Anglosphere complain that sanctions hamper aid relief intended for the jihadi-controlled areas and the Kurdish fiefdom. Here is the new administration signalling it has heard them.”

A report titled ‘The United States needs a new Syria policy’ has the appearance of a rewritten road map of Syria, but appearances can be deceptive. It is actually nothing more than a tactical attempt to whitewash the savagery of economic sanctions. Ford describes the offer as a “poisoned chalice” that would be “tantamount to a surrender, if met”. Cunningly presented in the form of a  hammer blow in a velvet glove, it calls for intrusive monitoring mechanisms, the release of ‘political prisoners’ and unhindered countrywide “humanitarian” access that could be exploited as a revival of the Timber Sycamore operation to arm, equip and fund the remaining armed groups inside Syria. More worryingly, the report argues for greater decentralisation in Syria, which may be translated as a revival of the partitioning plans, in part drawn up by Jeffrey Feltman, the US ambassador to Beirut from 2004 to 2008 and an arch-opponent of the Assad government, who is intent on renewing and intensifying US operations in Syria.

Under the Biden administration, we are likely to see an increase in US coalition military presence, particularly in northeast Syria.

A public-policy paper by the Rand Corporation titled ‘Swarming and the future of conflict’ describes potential tactics to be deployed by the Biden administration, using its multiple proxies to carry out isolated attacks on essential infrastructure, Syrian military and civilian targets so as to maintain instability and increase the pressure on the Syrian government.

One thing is clear, Biden is not going to repair the devastation caused by a 10-year ‘regime-change’ war – he is going to exploit the poverty, misery and suffering of the Syrian people to attempt full spectrum dominance in the region for the US and Israel. This has the potential to bring the US into direct confrontation with Russia, Iran and Hezbollah in Syria. We should prepare for a turbulent future in the region under Joe Biden. Democrat or Republican, the road map is the same. The only difference lies in the methods used to bring a recalcitrant nation to heel.