Home / WORLD / ‘Whoever sanctioned this should be ARRESTED’: Shaky Holyfield stopped in first round by Belfort in embarrassing scenes (VIDEO)

‘Whoever sanctioned this should be ARRESTED’: Shaky Holyfield stopped in first round by Belfort in embarrassing scenes (VIDEO) 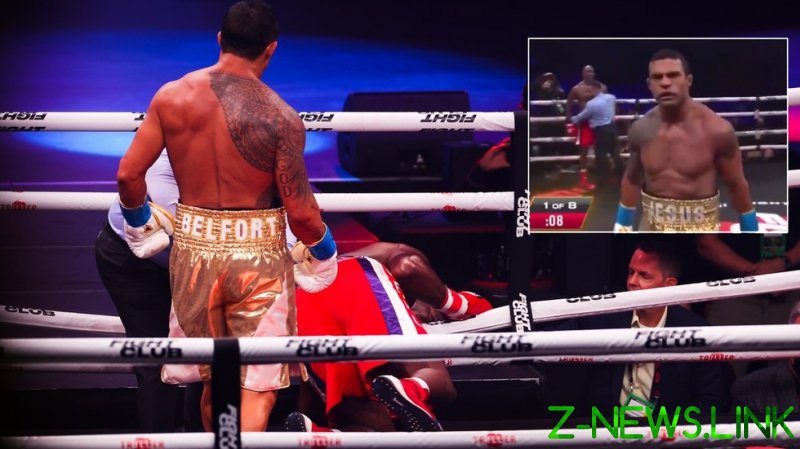 Stepping in at short notice for the Triller Fight Club pay-per-view contest after original combatant Oscar De Le Hoya was ruled out with Covid, Holyfield had already set fans on edge when footage of his labored sparring and pad work was shared ahead of the bout.

Holyfield last fought competitively a decade ago, and many feared that a return at the age of 58 was too much for the former two-weight undisputed world champion, even in a truncated contest of eight two-minute rounds.

Holyfield clambered to his feet, but that was merely Belfort’s cue to pounce as he immediately sent his rival back to the deck with a left uppercut.

The veteran survived the count, but Belfort piled on the pressure again, landing with a series of shots to the head and body without reply, leading the referee to wave off the contest with 11 seconds remaining of the round.

Belfort, who had only one professional boxing outing to his name prior to Saturday night, used his moment back in the spotlight to call out YouTuber-turned-fighter Jake Paul, who recently recorded the fourth win of his career with a split-decision victory over former UFC champion Tyron Woodley.

“Jake Paul – stop running from me,” Belfort said into the camera.

Ryan Kavanaugh, the CEO of Triller – the video entertainment service which hosted Saturday’s action – immediately offered to put up $30 million for a winner-takes-all bout on Thanksgiving weekend.

A beaten Holyfield had appeared a ghost of his former self in the ring, but somehow claimed he had been hard done by with the stoppage, calling it “a bad call.”

“I don’t think the referee should’ve stopped the fight that quick,” said the veteran.

Few would agree with Holyfield, however, as fans, fellow fighters and pundits queued up online to criticize the bout for going ahead.

Some such as US sports journalist Arash Markazi even claimed that the people who sanctioned the contest should be arrested.

“You could see right from the beginning, he was not the same fighter,” said Trump.

“That left jab was very slow. He’s lost a lot.”