Home / WORLD / ‘Who would ever vote for him?’ Never-Trumpers & Dems cheer after Fox host Lou Dobbs rips Sen. Lindsey Graham for Trump ‘betrayal’ 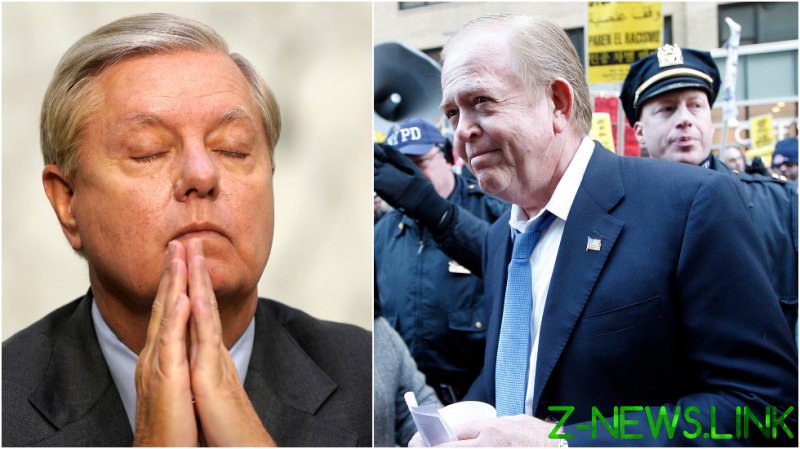 Dobbs took to the airwaves with an anti-Graham tirade on Friday, blasting the South Carolina senator after he suggested he would not attempt to compel testimony from the heads of social media giants Twitter and Facebook on allegations of censorship until after the November election.

“Graham has betrayed President Trump at almost every turn, he has betrayed the American people and his oath of office,” Dobbs charged on a segment of his show, also slamming Graham for doing “absolutely nothing” to investigate misconduct in the Trump-Russia probe launched at the tail end of the Obama administration.

While Graham did vote to authorize subpoenas for the tech CEOs on Thursday, joining the 11 other Republicans on the Senate Judiciary Committee, he indicated the move would merely serve as “leverage” to secure voluntary testimony at a hearing after the presidential race. Democrats on the Senate panel have called for a delay in the hearing, but were not present for the vote, as they opted to boycott separate confirmation proceedings for Supreme Court nominee Amy Coney Barrett.

The president and his conservative allies have repeatedly accused Big Tech platforms of political bias and censorship, most recently pointing to efforts by Facebook and Twitter to bury a New York Post report alleging shady business dealings by Democratic nominee Joe Biden and his son, Hunter.

Though Dobbs’ ire toward Graham was directed at his perceived disloyalty to President Trump, some of the most fervent critics of the commander in chief lined up to cheer the segment, among them the reliably NeverTrump Lincoln Project and progressive Daily Beast editor Molly Jong-Fast.

“Lindsey Graham is a weak man with a weak character,” the Lincoln Project said in a particularly brutal statement. “While we hate to give Lou Dobbs any credibility, when he’s right, he’s right and should be commended for calling out Graham for being the pathetic swamp rat he is.”

Some netizens observed that Dobbs’ remarks could serve as a de facto, if not unintentional, endorsement for Graham’s Democratic Senate challenger, Jamie Harrison, who has himself blasted Graham for making an about-face on the president – though for the opposite reason than the Fox host.

Though South Carolina remains a deeply red state, where Graham has handily won every race since first entering the Senate in 2003, Harrison’s campaign has turned heads. In the third quarter of 2020, he raked in some $57 million in donations, shattering the record for single-quarter fundraising for any Senate race in American history.

More conspiracy-minded netizens seized on the Dobbs segment as proof that Trump had directed the Fox host’s attack on Graham, some even theorizing it was a way to pressure the senator to “play ball” and “announce some phony investigation” into the president’s political rivals before election day.

Others ventured further into speculation, positing that Graham could retaliate to the supposed Dobbs-Trump pressure campaign by backtracking on his support for Coney Barrett, who has yet to be confirmed by a full Senate vote.