Home / WORLD / ‘Who would do that?’ Austrians shocked after seeing VIDEOS of vandal trashing memorial to victims of Vienna terrorist attack

‘Who would do that?’ Austrians shocked after seeing VIDEOS of vandal trashing memorial to victims of Vienna terrorist attack 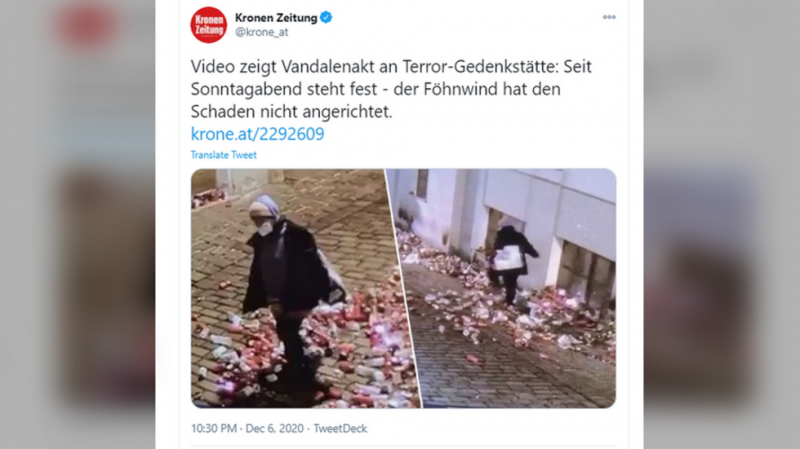 Videos first published by local media show a masked person in a blue hat stepping on memorial candles and repeatedly kicking them around while holding something resembling a grocery bag.

The impromptu memorial with flowers and candles spang up outside the city’s main synagogue, at the place where an Islamist gunman began his deadly rampage last month.

People were shocked to find the candles scattered across the cobbled street on Sunday. “Who would do something like this? As a society, we must stand together,” Beate Meinl-Reisinger, the chairwoman of the NEOS – The New Austria and Liberal Forum party, wrote on Twitter before the video was leaked.

Many were even more outraged after seeing the vandal in action. According to the newspaper Heute, Dietmar Schwingenschrot, a local politician from the right-wing Freedom Party of Austria (FPO), has offered 1,000 euros ($1,212) to anyone “catching” the perpetrator.

The vandal, meanwhile, was called a “pig” and an “a***ole” online, with people saying the attack against the memorial was “stupid” and “disrespectful.” Some suggested the vandal may have been mentally ill. Some people online claimed the vandal was a woman.

“Incidentally, I cannot express what I wish for this person without committing a criminal offense,” a politician from the Austrian People’s Party (OVP), Matthias Arth, tweeted.

On November 2, a terrorist killed four people and wounded 23 others in central Vienna before being shot dead by police. The perpetrator was an Austrian man of Albanian descent who pledged allegiance to ISIS. The terrorist group later claimed responsibility for the attack.